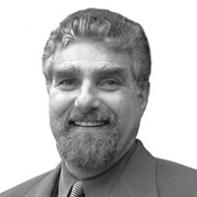 Gregory Djanikian has published five collections of poetry with Carnegie Mellon University Press, the last of which is So I Will Till the Ground (2007).  His poems have appeared in many journals including American Poetry Review, The American Scholar, Boulevard, The Georgia Review, Iowa Review, Poetry, Poetry Northwest, The Southern Review, Shenandoah, and TriQuarterly, and he has been featured on NewsHour with Jim Lehrer.  He directs the undergraduate creative writing program at the University of Pennsylvania.

I've walked into the house, I'm trying
to put my finger on it. Maybe it's how
things have been reshuffled, the rugs,
the paintings that are playing musical chairs.

Maybe it's the sitting room suddenly
taking on the sharp scent of mesquite,
mesquite side table, mesquite credenza,
black pots on the shelves
with their large open mouths.

I can hear my wife on the back stairs
ripping the carpet up from the treads,
ringing the crowbar with her hammer
like an alarm, watch your step.

There's new wallpaper in the bedroom,
toucans perched in the broad-leaf vines,
lizards among the mangrove branches—
so many ways of looking at it.

It's as if she's rehearsing for some shift,
her small adjustments furthering us away
from the way we're used to.

On the news this morning, a cow
swept up by a tornado, found miles away
unharmed, nuzzling in the grass—
almost as if nothing had happened,
a small upsurge of terror,
then the taste of sweetness.

I don't stand in her way, especially
when her hands are too busy squaring her goggles
and all I can say is “Honey, unplug the Sawzall,
let's have some wine, feed the birds.”

There are river stones on the sill
lined up like ellipses, horse sculptures
on the dresser that are made of straw.

Whatever proves too conclusive,
like this brick wall along the garden,
my wife sees in it the promise of a doorway,
the light slipping through.

Like the way she'll sleep tonight
with her face to the window,
the house quiet except
for her steady breathing,

what I'll be listening closely to,
hearing the river in it,
hearing horses at the edge
of the river, lithe and riderless.

Questions for a Late Night

And what if the soldiers came
shouting and clattering, pulling you
out of your house for the journey
which had no clear destination?

What if the road you had to follow
looking for fruit trees, spring water,
had to be imagined each morning,
no jacarandas offering you shade,
the deserts wafting you
like a husk in the simoom?

What if the granaries were leveled, the rivers dry,
young girls bruised in the thighs,
the bird-like men without feet?

What would the darkness bring you—
wolf howls, hoof beats
sticking you like needles—
if all you wanted of it
was a place to enter, disguised
from the smallest reflection?

What if there were no night,
the heavens dismantled, the earth
lit by a hundred suns?

What if you were the perpetual witness
walking without sleep
where everyone desired it
and no one dared close his eyes?

What words could you say
to remember the sound of breakage?
In what place would you touch your body
to feel your body touching you back?

This, Too, Shall Be a Place of Gathering

Then one day we will find ourselves
standing near a river

the sound of purling water
reminding us of our first incitements.

Yellow leaves will wreath us
like small vanishing suns.

A crowd on the far bank
will gather, their scarves furled,

their hats pulled tightly on,
waiting to return to their own entanglements.

There will be no flourishes, no twittering birds
or wind thrumming in the reeds.

At the edge of the woods
we will stand as shyly

as animals about to enter
their last astonishment.

like seed-shells into the river
and in different tongues.

or how often we knelt by its side
with open mouths.

‹ "Burr" by Gregory Castle up Three poems by Jackie White ›