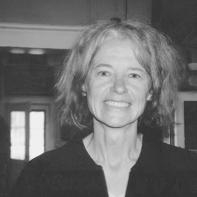 Melissa Kwasny is the author of four books of poems: The Nine Senses (Milkweed Editions 2011), Reading Novalis in Montana (Milkweed 2009), Thistle (Lost Horse Press 2006), and The Archival Birds (Bear Star Press 2000).  She is also the editor of Toward the Open Field: Poets on the Art of Poetry 1800-1950 (Wesleyan University Press 2004), and co-editor, with M.L. Smoker, of I Go To the Ruined Place: Contemporary Poets in Defense of Global Human Rights. She lives in western Montana.

I've hit the row of cottonwood, dry and soft, blond and brown with knots of rot and twisted sinews. A tree that does not grow straight but reacts to attacks from the weather, unlike pines which grow immaculate from their centers out. Before dawn, my windows are frosted. The light at the bird altar gleams. What do we wish when we wish someone good dreams? A bridge, by which we see a crossing, ice palace world with a lavender rim. The anthropomorph in the pictograph looked like an animal from within, its neck elongated, its legs bandied, its head crowned with two horns, slim and striped like an impala's. Out of Africa, out of origin, they spread out. If there were a wood for every emotion, a seasonal myth for the rain-box or savannah bear, it would mean: Don't worry. Keep going. Everyone drives through it.

The Ground, Which is Only Heavy Wind

title from a line by A.R. Ammons

The women of the interior prepare themselves for pain by igniting small piles of fir needles on their wrists. I, too, want to age in the mountains. Though all my life, I have avoided the extreme. When I turn away in public from the women with white hair, I become less public presence. To stumble on time: the autobiographic tradition, rift in the concrete I hit with my boots. I have been traveling away from home. I must return to it. Buffalo are the animals women were taught to emulate. They take care of their young. They mate for life, not like the deer, who are flighty and promiscuous. What causes the wind? I thought I knew until today when I distinctly felt it as earth's breath. Hours of shade, grass flattened by early snow, everything tending toward heaviness or lightness. What will I do in this big house alone? How will I possibly keep it?

The Greeks used the word 'translate' to talk of the gods whisking a mortal away, to a land not in this world but also not in hell, not dead, still living, but far removed. Yesterday, walking, I startled two blue grouse. Grouse rising: the sound of snow's collapse. I am sorry I roused them, though at least they're not the bats, whose hearts slow from a flutter to fifteen beats a minute over weeks, in which case, they might die to wake so fast. Entering into torpor-marmots, snakes, and toads. Mouse-hold, a pocket swept into a surface. I think about the deer I never see, out at night, leaving tracks, the white on white cross-stitch of their feeding. How the chickadees survive the cold by shivering. Some knowledge resonates, some remains closed, as if the right words weren't chosen. The flower-seed dreams on its side, and revives, so much of its translation behind it.

Frost: a hair trigger switch in the middle of the night. Path strewn with pinecones, the blackened leaves of willow. Friend at her chain link fence, waving to us as we go, the look in her eye already distant. I wish there were a gentler bridge, made of stone pitted by rain that carves a basin midway in which we would place flowers. Sometimes the season widens. We don't need to pick a door. The river lengthens into its horizon, a gradual downward slope, although yesterday, I found myself thinking about hell. If there is such a place, I hope the evil are held there in someone's arms, that they are treated tenderly for the sacrifice of their good lives. I come to the crossing with September in store. What it sees, I see. Time alone to still the self, small beast troubled by controlling winds. The way always one way, out or back in.