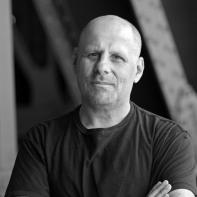 Eric Weiner is author of the New York Times bestseller The Geography of Bliss and Man Seeks God: My Flirtations with the Divine. A former correspondent for NPR and the New York Times, Weiner has reported from more than three dozen countries. His work has appeared in the New Republic, Slate, Los Angeles Times, Washington Post, Foreign Policy, The New York Times Magazine, and the anthology Best American Travel Writing. He divides his time between Starbucks and Caribou.

This interview was conducted through email by Interview Editor Erin Caldwell. She says of the process, "Eric Weiner is the author of two books that detail his soul-seeking in different countries around the world. He writes about his journeys with poignant humor that draws readers into the adventures with him, and this tone comes out in his interview with us. The most interesting part about interviewing him is the fact that he comes from the world of journalism, a distinctly different community than the literary one. What his work and life indicates, though, is that the distinction only exists if you acknowledge it; that writing is writing is writing."

Superstition Review: Both Geography of Bliss and Man Seeks God deal with searching for existential answers abroad. When did you first realize that the U.S. wasn't going to answer these questions for you? Was there a significant event that prompted this realization? What was it?

Eric Weiner: That moment came in—where else?—California. I was attending “Sufi Camp.” It was a lot of fun, but definitely more camp than Sufi. It was also eclectic to the point of confusion. A bit of Buddhism, a smattering of Hinduism, and even some Sufism. I realized then that religions are a lot like cuisines. They don't travel well. They tend to get watered down and mushy. So I vowed then that, as much as possible, I would travel to the source of these faiths.

SR: Would you characterize your books as “travel literature”? Why or why not?

EW: To be honest, I'm not sure what “travel literature” means. It covers so much ground, from a fluffy story about a Caribbean cruise to a masterful piece of writing from the likes of Jan Morris or Bruce Chatwin. I do travel, and I like to think I am engaged in an act of literature, but it is a specific kind. I like to think of my books as “travelogues of ideas.” I go on the road not to meander but in search of something.

SR: What is your process while traveling and writing? Do you write each day, use a recorder, scribble? Describe your ideal methods.

EW: I have a system. I usually take notes by hand (occasionally using a tape recorder) then, in the evening, transcribe the notes onto my laptop. I do this because 1) I like to reflect further on what I've experienced during the day and 2) My handwriting is atrocious, perishable. If I don't read it soon, it will be lost forever. Really.

EW: That's a tough one. It's difficult to separate the two. I enjoy the combination of these two activities. If I travel somewhere knowing that I am going to write about it, I am sharper. My senses are heightened. Ultimately, when it comes to travel, I subscribe to Henry Miller's view. “One's destination is never a place. It is a new way of seeing things.”

SR: How did you come to the world of journalism? What drew you to radio journalism, specifically?

EW: Like many journalists, I came to the field through a side door. My first job out of college was with Flying Magazine. I have a pilot's license, and I like to write, so this made perfect sense. Later, I fell in love with radio, with the way it conveys both facts and emotions, in equal measure. I'm also something of a ham.

SR: In Geography of Bliss, you visit several countries seeking the key to happiness, starting with the World Database of Happiness in the Netherlands. How did you decide which countries to visit? Would there still be a book if you found “the key” in, say, Switzerland, your second stop?

EW: I chose some countries because they ranked (surprisingly) high in happiness studies. I chose others because they made perfect Petri dishes in which to study happiness. For instance, if you believe that money buys happiness, then Qatar, surely, must be the happiest place in the world, since it is, on a per capita basis, the wealthiest. I didn't expect to find “the key” to happiness in any one stop. No country has a monopoly on happiness.

SR: Even though you are a journalist, one of those people paid to sound professionally distanced, you maintain an engaging narrative tone. Do you have experience writing creatively? How has your writing style developed over the course of creating your longer works?

EW: Thank you. When I made the transition from journalism to more creative writing, I had to work hard to shed that distance, disengaged style. It is, quite frankly, liberating.

SR: In Man Seeks God, you are an agnostic who faces mortality and journeys towards a deeper understanding of God, the Divine, etc. Do you think you would have undertaken these adventures without the health scare? In what other ways did this health scare impact your life and work?

EW: I probably could have—I've always been spiritually curious—but the health scare created an urgency that wasn't there before. It reminded me that the proverbial clock is ticking, and that if I was going to explore these deep, spiritual questions, I better do it soon. As I move on to other topics, that urgency stays with me.

SR: How did you choose which religions to seek out for Man Seeks God? Were you hoping for a definitive answer to your questions?

SR: Like many young, wanderlust-y writers, I dream of figuring out a way to live, write, and go everywhere in the world. Was there any one moment when you figured out how to do this? Do you have any pointers on making it happen?

EW: When the idea for my first book, The Geography of Bliss, came to me, it was something like a revelation. I realized that I need not focus on the world's misery, as I had done as a journalist, but could write about places, and people, that inspire. That is still what I'm doing, in different forms. As for advice, I'm afraid Nike said it best: "Just Do It!"