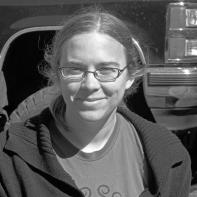 Laura Breitenbeck is a graduate of the University of Nevada, Las Vegas MFA program and Assistant Program Coordinator for the Dzanc Books/CNC DISQUIET International Literary Program in Lisbon. Her short fiction has also appeared in The Blotter.

The night Lindsay and her mother moved to Bois Blanc, four boys climbed out of the juvenile detention camp and broke into half the houses on Portage Road. They had climbed over barbed wire to get out and their hands made wisps of blood on the cabinets and the doors. They stole things of no value: shell-crusted souvenirs of beach towns, porcelain drugstore dolls with dust in their hair. From her step-grandmother's kitchen Lindsay could hear the sirens crying down the block. When the boys saw the police car they threw what they had in the street and ran. Three of them were caught, but the fourth disappeared in the woods. When he saw the lights he took off running, down the road and off the road and into the pine and mist.

Everyone wants to send us their trash, said Lindsay's step-grandmother. She took Lindsay downtown to see the damage and to sign up for a card at the public library, which was half of someone's house and full of pink and red paperbacks where women twisted away from men's hands in storms of bright hair and silk. Lindsay's step-grandmother opened them a few at a time, scanning them for something unfamiliar while Lindsay looked for new volumes of The Babysitters Club. In another year she would be twelve and that was old enough to babysit. Then she would have money of her own, and in a few years, a car. Outside, someone had written the name Rey on the wall of Lewis Tackle in blue paint, a wavy pitchfork for the y. Little sons of bitches, she said to Lindsay. This used to be a nice town.

People were angry. They locked their doors or refused to lock them and wrote letters to the editor about their decisions. A search of the ravine found only a few heavy footprints and one model ship-bottle cradled in mud. After a few weeks there were no more searches, though the boy's gray face scowled from behind the post office counter in the Ben Franklin store for months, taped to the paneling next to last year's Christmas cards and the cartoon posters of packages bursting with bayonets, gasoline, firecrackers and warheads. By then no one expected to find him alive. There was nowhere to go but the woods, and nothing beyond them for miles, and he was dead, probably, almost definitely dead.

In the long hours of school Lindsay planned the ways he could have survived. He could smear mud and grass on his jumpsuit for camouflage and steal new clothes from one of the clotheslines that pillowed in the air of Bois Blanc. He could eat dandelion leaves and berries and pick his way through the woods to Canada, where there was a new life waiting for him, a whole town waiting to believe in his made-up past.

The far edge of the playground touched the south fence of the detention center, two fences with a shared roof of barbed wire and a narrow no-man's land between them. The boys stuffed toilet paper and soaked socks through the fence into the red dirt, and gum and plastic forks with snapped off teeth. Lunch mothers complained that they could hear the boys' swear words from the soccer field, on some days even out in the streets beyond the school, the words too faint to make out. Lindsay's new teacher explained in the slow voice teachers always used that past the baseball diamond was off-limits this year. Governor Engler may not care about your safety, but we do, she said.

It was easy to get free of the lunch mothers and out to the border of no man's land. Lindsay was used to moving slowly and slipping away, and the weeds were tall. She sat down close to the fence and waited for the boys to find her. At first there were a lot of them, arguing and making faces and shoving each other, butts pressed up against the fence and wagging, middle fingers held high and swaying back and forth like sad birches. Then they gave up or were kept away, and days passed with only the echoes of voices far away, and only one of them ever came back to the fence. He was Lindsay's age, small and smooth-faced. He put his hands on the fence and slammed his thin body against it, shouting, Hey, look at me. Look at me, bitch. Look. He pressed his face against the chainlink and the wind lifted his long hair toward her like fingers of dust.

How are you, she said.

He kicked the fence and lurched against it with a sudden crotch-grab like a spasm, maybe he couldn't help it. It would be sad to have some kind of disease where you couldn't help things.

You want this? he said.

What, he said. You like in the weeds or something? He mashed his thin body against the chains as if the fence were a hologram he could push through. Every atom of matter is ninety-nine per cent empty space. That was true. It had been proven in labs. If you could get all the particles moved over to one side, you could make anything open.

What do you want? he said.

Nothing. Lindsay smiled and twirled blades of grass between her fingers, smiling down on them with what she guessed was tender understanding. Just saying hello.

Crazy bitch, he said. Do you realize how stupid you sound?

Yessss, he said, curving his neck and spine like a snake. Yesssssss. Yessss.

He slammed his shoulders into the springing fence and bounced there for a minute or two, maybe ten, his back to her and his hands deep in the pockets of his jumpsuit. Then he ran back toward the others, out of sight. Lindsay could hear other voices on the air, swear words, probably, thrown up high into the grey air like stones.

She was sure that if she came back often enough, she and the boy would eventually be friends. That was the way it was in every book and movie, and that was the way it would be for them. Possibly he would even be her boyfriend, and they would run away together, between the pines and birches to the town in Canada where lies became the truth. She pictured the movie of their romance, the tall actors who would play them running along a river in the mountains, or lying head to head in a clearing beneath the trestle where she coiled and uncoiled his long curls with her fingers and the whole world hummed with trains and violins.

She sat by the fence all through October and November, as the wind got cold and the branches bare, and practiced the conversations they would have. Some days he didn't come and some days he said nothing, just bounced against the fence with his back to no-man's land, the chainlink clanging. Then toward the end of November one of the lunch mothers caught her walking toward the fences. She came striding over the frozen mud, blowing the gym whistle hard and waving her arms. Lindsay didn't turn around. She could see the boy's bare hands on the wire. She could see his soft hair twisting in the wind as he watched her walk toward him through the bent grass to the edge of no-man's land.

Did you not hear me, she said. It was one of the mean girls' mothers, thick and powder-pale with a chapped red upper lip. She was out of breath, heaving under her bright pink parka. The first snow of the year was falling around them. Out past no-man's land she saw the boy tip back his head and stick out his tongue.

If you can't learn to listen, you can spend recess inside.

She thought of the boy who had escaped. He must have reached Canada by now. She imagined him in his new house, laughing at TV with his new parents, reading a comic book by the fire. For a moment she was sure there would be some way to make a break for it, a hole in the fence no one had noticed, a way of raising her arms that would fill her coat with wind and lift her. The lunch mother grabbed her by the arm and jerked her back toward the school.

You keep away from that fence or we will keep you away. Do you understand.

Lindsay looked for the boy but she could no longer see him through the snow and the weeds. She stuck out her tongue and let the flakes disappear in it one by one by one.

Then it was winter for a long time. In Mrs. Bergstrom's classroom the map of the US border was a pink line shivering at the top of the known world. Canada was a brown haze fading into the white edge and the white wall beyond it. On cold days the classes waited out recess in the gym and the wind shrieked around the building. Lindsay sat by the wall with her arms wrapped around her knees and the girls played cootie catcher without her on the dusty gym mats. When spring came she could no longer find him, and there was no one to ask where he had gone. To Canada, she told herself, but she knew it was a lie.

‹ "The Day Nixon Was Impeached" by H. Lee Barnes up "The Believers" by Laurie Blauner ›