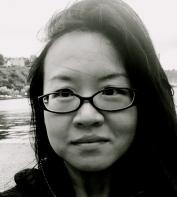 When she is not writing, Christine Ma-Kellams is a social psychologist and college professor. Her recent fiction has appeared or is forthcoming in the Kenyon Review, Gargoyle, Hypertext, Straylight, Blue Earth Review, and Flapper House.

My ex-wife, Chazzy, is at the kitchen table peeling pomegranates, the plum-colored juice seeping into the unfinished wood like a birthmark in the shape of Kansas. When I first met Chazzy, she went by Charlene, and was an undergrad at Berkeley; she had long straight hair and a complexion the color of cornbread bottoms and wore clothes that draped over her angles, turning them into curves. Now she goes by Chazzy or Chaz or sometimes Char-Char; her hair is crunchy and her skin is an amorphous shade of nut butter and her wardrobe consists of boyfriend jeans matched with slouchy beanies. Today she dons a red bandana; perhaps, after all these years, this represents her re-entry into the dating market. Whenever she wears colors, she calls it “trying,” like it’s a bad word.

“Is there any good way of eating these damn things?” she asks.

“HOW TO EAT POMEGRANATE,” Chazzy yells into her phone.

“If Siri was from another country, I would say that’s racist,” I tell her. “Yelling won’t make her understand you better.”

Chazzy looks surprised; she has been accused of many things over the years, but racist was never one of them.

She makes her case with a paraphrase of a Justin Simien satire about racial hypocrisy at a fictional Ivy League school, one that neither of us watched but read the reviews for in The New Yorker.

“We should’ve watched that,” I tell her, by way of concession.

At 11:15, Chazzy and I are the only people waiting for the Vista Room to open, SF State’s own self-run restaurant and ongoing campus experiment. Years ago, when we were still married and Chaz was still Charlene, I found out about this place during a campus interview for a faculty position they ended up giving to a psychologist who starred in Prudential Financial Services commercials during his free time. I spent the whole day vomiting during my bathroom breaks and, as I found out later, miscarrying the blighted ovum I had mistaken for a baby.

Two months prior we had taken a trip to Maastricht, the Netherlands, to the third floor of an apartment building situated along the Maas River, with a star-shaped lantern in its only window, to meet the Babymaker. Charlene stayed in the kitchen when he and I retreated to the bedroom. The Babymaker took the glasses off his minion-shaped head and asked me if I would like to undress myself, or whether I preferred he do it. He kept his own shirt on, for propriety (I assumed). “It helps if you come,” he said. “You know, for making a baby.” “It always does,” I agreed. Afterwards the three of us went out for liege waffles and talked about the neuroscientist he slept with last week.

My mother said it was good that I didn’t get the job; the school probably killed the child with its proximity to the Castro district. She made no mention of the method of conception, or lack thereof. This was the same woman who burned a charcoal portrait I made of Marilyn Monroe in high school because the actress died by suicide, and thus an evil spiritual influence by her taxonomy. “You can see it in her eyes,” Mother said. I told her she was just trying to look sultry, but Mother didn’t know what that meant, and I didn’t know how to say “sultry” in Chinese, not “sexy” or “seductive” either. By the way she dressed (a perpetual muumuu, ever since my sister was born and a perpetual state of post-pregnancy body set in), she probably would not have understood anyway.

“It’s a good thing we started as an interracial couple,” Chazzy says. “I think it helped people adjust to the things that came later.”

“The interracial thing was just a foot in the door?” I ask her.

“I’m just saying—you start with the small things first, move on to the bigger stuff later.”

“So this was all planned, this whole time?”

Chazzy doesn’t answer. She is busy unrolling the flaky layers of bread and arranging the deconstructed pieces on her plate. This issue of foresight is a sore point for us.

Looking back, things are as opaque as ever. In matters of love, hindsight is rarely an advantage. Chaz calls our early days together as her “female visibility years.” We were both trying to make it in the city—Chaz with her brief stint in the mayor’s office, balancing his checkbook, following by a long tenure at a tech company whose motto is “see no evil”; me with graduate school followed by a string of postdocs that had me bouncing between the East Bay and South Bay.

We bought a small gray house in Oakland, near the edge of Chinatown, with a guesthouse in the back that lacked a permit but whose presence gave the listing a marked advantage when we sold it a half decade later, when the influx of techies were trying to turn the Compton of Northern California into the next Park Slope, or at least Bushwick. When Chaz threw out her flatiron and stopped shopping the Simply Vera collection at Kohls, I thought nothing of it; I have flimsy Asian hair and never understood straightening, or Vera Wang’s mass appeal. If anything, I’ve always liked curly brown hair—even all the princesses in my drawing books had apocalyptic ringlets the color of tamarinds.

Then Oscar Grant happened. This was 2009, before Trayvon and Ezell and Michael and Emanuel A.M.E., before another Michael (with the last name B. Jordan) made his debut as a serious actor and Ryan Coogler was given the benefit of the doubt. Chaz took the shooting personally and opted out of watching the Obama inauguration for fear of supporting all the anti-egalitarians who thought the presidency signaled a post-racial era.

“At least come to the inauguration party,” I told her. “I’ll drive.”

“How can you take things so lightly?” she said. “At such a time as this.”

“Doesn’t Obama deserve a little celebration, even with everything else that’s going on?”

“He called himself ‘Barry’ in college. Did you know that?”

“You know what an Oreo is?”

“I’ve been called a banana my whole life, until I married you and you surprised everyone by not being a white guy.”

When I showed up at the party without Chaz in tow, no one talked about Obama’s brief stint as “Barry” or asked if marrying Michelle was a strategic way of getting the Black vote (and counterfactually, whether marrying a White woman would’ve earned him even more points, by getting the White vote). I called Chaz and asked if she wanted me to bring home some leftover hors d’oeuvres. I asked her if something was wrong. She asked what I thought about selling the house. I reminded her the country just went through the worst housing crash since the Great Depression. She told me she found a bullet-shaped hole in the garage door but had yet to locate the actual bullet, or casing for that matter. We hung up without deciding to agree to disagree.

I moved out first. We did the dishes together one last time and wrapped the wine glasses in newspaper; I got to keep the Muuto crushed bowl in exchange for Chaz keeping the gold-plated flatware from West Elm. Then she gave me a box of her clothes.

“What, is this charity now? Or a consolation prize?” I asked.

“Dig through it first before you throw everything out. I know how you feel about V. Wang.”

She didn’t tell me until we had coffee three weeks later that she was officially moving into her butch-presenting lesbian phase. Only when she started referring to herself as “Chazzy” did I realize other changes were coming.

“Chazzy? Where did ‘Chazzy’ come from?”

“Seriously? Does Chaz Bono mean nothing to you?”

“Does that mean you—”

These days Chaz is trying to convince me that gender is an ever-moving target on a spectrum.

She doesn’t find this funny.

I am also not supposed to call her “she” anymore. I offer to talk to her in Chinese, where pronouns are un-gendered and neutral and carefree. She doesn’t laugh at that either.

The last summer we were together, we took a plane to Boston and rented a car to drive to Provincetown, on the very tip of Cape Cod. There was no parking anywhere, so Chaz dropped me off in front of the B & B and looked farther inland for a place to deposit the Sebring Hertz gave us (“last car on the lot,” the man said proudly, when we showed up). I checked into our mansion-turned-hostel and inspected the mattress for bed bugs (none), then tested the water pressure in the shower (good). Char didn’t show. I called her phone, which rang twice and went to voicemail. I went downstairs and asked the front desk if they might keep an eye out for a woman in a beanie with natural hair, and give her one of the room keys. I explained that she was my wife, and her phone was dead, but that I wanted to walk around before it got dark.

When I came back to the room three hours later, there was still no Chaz; no sightings of her at the front desk either. I walked out again and eventually found her ambling along Commercial Street with her beanie in her hand, smiling and standing in front of a purple bakery. I hugged her tight from behind with a combination of fury and relief. “My phone died and I couldn’t figure out where I was going” she told me.

I couldn’t tell if I was madder that she got lost or madder that she got found. Chaz, oblivious to the fury, held the door open beneath a cursive sign that read “Stop Here,” followed by an acrylic painting of a top-heavy cupcake preternaturally endowed with frosting. I obeyed and walked in. Only when I turned back did I see my wife hovering still at the door jam, face open and unafraid.

‹ "The Haircut," by Bill Sommer up "Society of Jumpers," by Courtney Santo ›