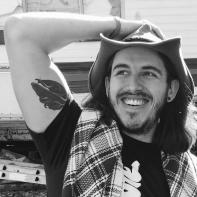 John-Michael Bloomquist is a poet living in Bloomington, IN with his wife, where he teaches poetry at the Monroe County Jail and gift economics at the Crestmont Boys’ and Girls’ Club.  He holds a dual-genre MFA degree in Poetry and CNF from Virginia Commonwealth University. His poetry has been published in The Tampa Review, The Carolina Quarterly, Third Coast and many more. He has forthcoming work in Painted Bride Quarterly and he is being nominated for a Pushcart by Matter. He is the founder of poetryfortrash.com, a public arts project that encourages gift economics as a solution to pollution.

Who wouldn’t want to return home after hours
of hearing the schizophrenic woman scream
like the litter of pigs falling off a cliff,
and yell back at the child molester in solitary
kicking the door for minutes that turn the jail
into a gun that wants to clock out
on his head? Jesus, Jesus, Jesus
Christ, I cannot deny I’ve taken the name in vain,
but Jesus, these men don’t profane the story
about the savior interceding for them
because Daddy, the Abba Father,
knows our flesh is weak. But I don’t believe

the crucifixion forgave us, and Jesus was wrong
when he exorcized the legion of demons, driving
them into swine. If he received them as his own
children, I could love God easily. Though I don’t
like the plans any God has for anyone leading to jail,
my Teacher says Karma is 20 years in a Chinese prison
for shooting soldiers that raped nuns with cattle prods,
that discipline is freedom from unwanted thought.

I kiss his toe because I cannot wash their feet.
Mark has prodigal tattooed across his knuckles—
and he tells me we are all that wayward son
wanting to return as one of the father’s servants,
who have it better than any of us self-medicate.
If we punish the addict for a wound that won’t heal, who will
make us equal? I think Christ died for us
to forgive his father, who until he became a man
and dwelt among us had no way of knowing
what it was like to be Job, suffering a bet with the devil—
I tell them though my mom prayed my uncle through prison,
he fears buffet trays and prayer. Who hasn’t backslid

doesn’t known his own brother. When I prayed to my shadow
I didn’t know I’d be exorcized, but love is more
terrible than the devil. Each day that I visit
the jail full of men, who hug me the way
their families cannot, write poems about childhoods
I couldn’t imagine, I feel the love of my father.

Vajra of the Octopus

In October, Richmond is a sparrow
eating the bread of sky. In an alleyway
tabbies are marked with the legend
of Muhammad, who loved his cat so much
he left his thumb print between its eyes.
A white nub of fur so we’d know
the Prophet is with us, infinite
as the eight legs of an octopus
who can spray ink in the face of a hammer-
head shark. If that’s not enough, it can
leave a severed limb as temptation,
like the snake offering the fruit
of will so we could learn love
parts us. In the afterlife of instinct
does the octopus fear the present
will feed another mouth?
There is a green double bowl
of water and food near the trash can,
but the cats would rather hunt the birds.
Desire makes them predators
without choice. An octopus
could sever its arm on a date
if he knew mating too was death’s
wake to her for latter use. I wish
I could be used without being present,
and return to her without her
coming back. We’d part together,
like DeSade writing Justine in prison
could believe the twitch of wings
on a decapitated bird is a sign
Justine’s sister, Juliette, will find her
in the mobius strip of birds singing
on the accordion of the paper chain
of fragile blood, bone and skin—
because it takes a libertine to savor
our suffering. Orpheus playing us headless.
I wait for the night to sing, the plane
landing through fog. Guided by a machine,
I follow the blinding chemistry
of my mind to fulfill its prophecy.
A cat leaves a gift at my door
with the bow undone, and I am left
as the octopus limb—the corpse
part of me that stays with her,
and when she shakes it like a bell,
I come back for myself.