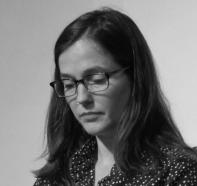 Laura Wetherington’s first book, A Map Predetermined and Chance (Fence 2011), was selected by C.S. Giscombe for the National Poetry Series. Her work appears or is forthcoming in the journals Colorado Review, Narrative, The Michigan Quarterly Review, Eleven Eleven, The Normal School, and Drunken Boat, among others. She teaches in SNC Tahoe’s low-residency MFA program and co-edits textsound.org with Hannah Ensor.

The body, therefore,
after Liliane Giraudon

I want no part of an alpha-anything,
but saying that I touch the mountain means

the mountain touches me also.
What chaos can make the fringe
of a discourse its center.

acts of violence are followed by a period of silence.
The rain sounds thunder.
I touch the world by throwing rocks at it.
I touch the other side of the lake with my voice
. The essence of speech
echoes the sound of speaking in rain.


One way to respond is to say “I don’t know” and follow up with thinking. Another way is to present experience as fact.
after Rosmarie Waldrop after Edmond Jabès

You scooped up loose fragments of bone—perhaps a coyote or maybe a domestic dog—“I don’t know enough about the world,” I said, and took your hand. First thought always clouding the surface. “Intense interest and sexual attraction are not the same thing.” You furrowed your brow and the debate continued in quiet. All along the skyline, the blank page of the clouds outstretched like a hand. The naked sagebrush did not bend with the wind. We stood there for some time. Then you tilted your head, indicating down the road. Going forward could only be a metaphor, and our shadows pointed east.

A pitiful century
after Abdellatif Laâbi

This generation has turned out to be anthroposcenic.
So many questions burning my tongue
hot breath singeing this pitiful century until
there is no longer a disappear,

no longer a leave from this growler.
Living without regret was the first rupture.
The second rupture: regret.

what the witnesses mean
and what the telling can hipholster.
(A comment on administrative practices—they’re inefficient,
top-heavy to the tipping point

down through the hurricane season,
now in small earthquake season / the silence is pain
asleep, and we nap submerged
our troubles in waist-high water

walking in place and gulping what air
the boundary between

the how-cool river
and a life that can pick up again underground.