"The Story of the Elephant," by Jonathan Cardew 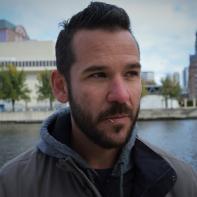 Jonathan Cardew's writing appears or is forthcoming in Atticus Review, [b]OINK, Digging Through The Fat, Jellyfish Review, JMWW, People Holding, Smokelong Quarterly, and Segue, among others. He is the Fiction Editor at Connotation Press.

The Story of the Elephant

Money was tight. I was doing jobs for Aziz in Finchley, but he didn’t like to pay regularly—sometimes weeks would pass without pay.

I especially didn’t like our landlord. His name was Simon, which was no name for a man. He had pale, slight hands, and when he offered one to shake, it was hard to hold because it felt like a dead fish.

He would come in the front door, walk straight into the living room, and sit himself down by the gas fire. His hands groped the arms of the green chair.

Zovig would bring in tea on her mother’s plate and Simon would perk up, he’d sit to the edge of his chair. He always looked at her in an attentive way, as if she were about to slip from his reach at any moment.

He took two lumps of sugar, slowly, from the ceramic pot.

“I hate to say it, but I know other families who’d love to have a flat on this street,” he said, blowing steam off his tea.

She had the ability to bore her eyes into my skull.

“I’m just saying, I have options,” he said, lifting the cup. “Thank you for this, Zovig.”

We sat in silence—a stiff kind. Simon drank his tea to the last drop and then rearranged a few of Zovig’s elephants on the mantelpiece.

I could feel Zovig tense up.

“Aziz will pay me soon,” I said, putting my hand on her knee. “The cellar job is nearly over. The foundation walls are repaired."

“I’m sure you’re right,” said Simon, turning all the elephants toward the wall.

That night, Zovig stayed up, reading through her grandmother’s letters again—obsessively combing through them, as if she could breathe life into her deceased corpse through words.

I called Aziz, but it went straight to his answer phone message.

Then a dead tone.

“Do you remember the story of the elephant?” said Zovig, pulling out a letter.

I shook my head.

“You do. I know you do. My grandmother told it all the time.”

She touched the letter with her fingertips, as if reading it through her skin.

“The elephant was always in the watering hole—drinking, bathing, splashing about…"

I slammed my fist on the coffee table.

She stared at me, with the letter in her hand. She then filed it away in her box and went into the kitchen.

A week later, there were no elephants on the mantelpiece.

“It’s interesting because you seem so genuine,” he said, walking past the mantelpiece. “Such good people, really. Law-abiding…but then there’s this.”

He held out a small plastic bag, containing a white powder.

“Son of a bitch!” shouted Zovig, launching towards him with her fingers out like claws.

I pulled her back.

“Easy tiger,” Simon said, sliding against the wall, eyes wide and round—but full of glee. “Wouldn’t want to add assault to possession, would we?”

Simon took a seat in his usual armchair. He pushed his palms down the arms to dry off the sweat, and then he exhaled and smiled.

“I could murder a cup of tea, though,” he said.

I went to get the tea.

When I returned, Zovig was sitting in the armchair next to Simon. Simon was leaning against the side of the chair and was whispering something into her ear.

One pale, sickly hand was loosely touching her sleeve.

I placed the tray on the coffee table.

He leant forward to take a cup and saucer.

“Zovig’s going to tell me a story,” he said, using the sugar clasp to drop cubes into his cup.

‹ "Tide Roll Away," by John Milas up "Little Mouse," by Kalani Pickhart ›