"What Are You Doing," by Jack Garrett 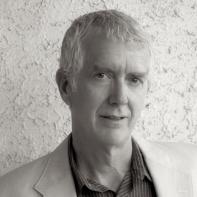 Jack Garrett has worked in radio in Colorado and New Mexico and performed onstage in New York where he helped found a theatre company with other writers producing their original work. His fiction has appeared in The Literary Review, The New Orleans Review, Fugue, Natural Bridge, The Portland Review, The Santa Monica Review, Quarter After Eight, The Los Angeles Review, Monkey Bicycle and Witness. He is also a voice actor and audiobook narrator.