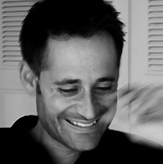 A 2017 Guggenheim Fellow, Alexander Maksik is the author of three novels: YOU DESERVE NOTHING, A New York Times bestseller; A MARKER TO MEASURE DRIFT, a New York Times Notable Book of 2013; and, most recently, SHELTER IN PLACE, named one of the best books of the year by The Guardian and The San Francisco Chronicle. Maksik’s writing has appeared, or is forthcoming, in the Pushcart Prize Anthology, Best American Nonrequired Reading, Harper’s, Tin House, The Sewanee Review, Harvard Review, and The New York Times Book Review, among other publications. Photo by Martina Bacigalupo.

“So High, So Manic,” an Interview with Alexander Maksik

This interview was conducted via e-mail by Interview Editor Crawford Pederson. Of the process he said, “Alexander Maksik’s novel Shelter in Place shows off Maksik’s skill as a storyteller. He shies away from no subject matter and puts every character under examination in a way that creates a narrative that doesn’t just ask the reader to think about one’s own life, but begs the reader to. I am very happy Mr. Maksik agreed to talk to me.” In this interview Alexander Maksik talks about structure, his mother, and common ailments.

Superstition Review: I enjoyed the variation in page length between different chapters. How did you decide to fluctuate chapter length so frequently?

Alexander Maksik: I wanted the novel’s structure to reflect the “structure” of Joey’s mind. There are days when he is so overtaken by depression that he can barely speak. Other days he’s so high, so manic that he can’t stop talking. I hoped to express both modes not only in linguistic style, but also in the length and form of those chapters. I imagined each chapter as a reflection of a single day and also as a kind of musical score as if not only language, but form might capture his state of mind.

SR: You made a decision to talk directly to the reader through the narrator. This makes the story very intimate at times. Why did you decide to break the fourth wall and have the narrator communicate with the reader?

AM: Well there’s a distinction between myself and Joey. I don’t ever write directly to the reader. I don’t mean to be pedantic, but it’s a crucial difference. Joey is a deeply lonely and isolated person and particularly so during the years he’s writing this story. He writes to Tess, to his sister, his parents and to the reader (his not mine). And I didn’t really think of the person he’s speaking to as a reader in the traditional sense. More, a kind of imagined receiver, an invention to stave of his loneliness, someone who might help make sense of what he cannot.

SR: I tried at first to read your novel on my college campus, but I found there was something about your prose that makes me want to read the novel in a quiet place. Can you discuss your writing process and how you get a rhythm to flow while writing?

AM: As a rule, in a first draft I try not to edit much. And, with this book, I very consciously tried not to edit at all. I thought the only way to capture the wildness of those manic episodes would be to write with as much freedom as possible. It made the editing process much longer, but there was something so liberating about writing an entire book with so little caution, without trying constantly to assert control over the work.

SR: The “tar and the bird” are prominent symbols within the novel. Where did the idea for the tar and bird come from?

AM: The honest answer to that question is that I don’t know. I wish I could say that it was a very considered choice, but those were the images I found first and they are the images I kept. They came out of that wildness And I love the strangeness and mystery of that.

SR: The term Mary Sue has become a popular cultural term used to describe any female character that is seen as perfect. The main female and love interest to protagonist Joey, Tess Wolf, is far from a Mary Sue. She is layered, fierce, and troubled. How did you write such a compelling character?

AM: I was raised by a layered, fierce, intelligent, tough, independent woman. And those are the kinds of women I most admire, the women I’m most drawn to. So Tess is, to some extent, an amalgamation of those women. But added to that, I wanted her to have the characteristics of so many classic male characters – remote, unburdened by the need to explain oneself, mysterious, violent, volatile, consumed by notions of heroism. I wanted all the women in this novel to take on those traditional male roles, and all the men to play roles traditionally played by women.

SR: There seems to be an underlying theme of depression and mental illness throughout the novel. How do you write about such a loaded topic without trivializing it?

AM: Mental illness is really one of the novel’s primary subjects and the only way not to trivialize it is to treat it not as some bizarre aberration, but as what it is: a terrible and very common ailment. I know many people who suffer from some version or another of mental illness and I have some experience with it myself. But ultimately, from a literary standpoint, it is no different than any other subject – you must avoid the temptation of cliché, of simplistic interpretation.

SR: What are currently reading?

AM: Shirley Hazzard’s The Transit of Venus.