"On Light," by Gabrielle Montesanti 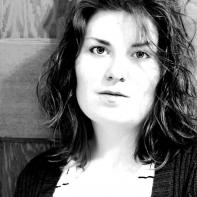 Gabrielle Montesanti is a current MFA student at Washington University in St. Louis. She has a BA in mathematics and studio art from Kalamazoo College in Michigan.

After months of darkness, Alaska turned manic. In June, she gifted us entire days of dizzying light. But I was a child of darkness, unaccustomed to the flare. Without towels on my windows, I couldn’t sleep.

My dad told me it isn’t natural to be shrouded in darkness twenty hours a day. He wished for a lifetime of constant light and lived for those manic months of summer. He seemed to imagine a world of perpetual light like the space above the clouds he used to visit when he flew airplanes. Back then he never came with us to church. He never lit a candle in moments of grief and he never sang The Lord is my Light.

To me, constant light took the form of TV. I watched crime shows where prisoners were punished in rooms that blazed with artificial brightness. I imagined finding Jesus in the rust stains lining the shower drain or the burn marks on prison toast, but surely he would vanish before telling me whether it was day or night. I’d be unable to sleep, even with towels on the windows, even with towels trifolded on my face, layered thick like roof tiles.

We left Alaska because of the light. The absence of it.

In Michigan, my mother used to punish me by removing all the bulbs in the bedroom I shared with my sister. During these blackouts, we sat cross-legged in bed and I would reach for the landscape of my sister’s face. The knowledge that the dark couldn’t be eradicated by flicking a switch made our situation seem dire. The staggering darkness was meant to discipline me, but I secretly delighted in it. My sister cried out for our father until sleep overcame her. She never knew Alaska.

When my dad heard that the northern lights would be visible in Michigan one night, he took me out to a little airport where there were no trees and we could see the sky. Years ago, we used to go there together on radiant summer mornings and watch the planes skim the ground before taking off again. It had been several years since we’d done that, and this time we tilted our faces skyward not for planes, but to search for a hint of green light.

The summer I spent in Rome was so bright I felt interminably on the verge of a sneeze. I arrived two days before la pioggia di petali de rose, the raining of rose petals: a tradition to gather in the Pantheon after mass to celebrate the summer solstice. On that day, the sun hung directly above the temple, casting a perfect beam of light through the oculus. Rose petals poured down from the dome. The falling petals represented the Holy Spirit: the tongues of fire from the Acts of the Apostles. I imagined petals twisting in the air like bodies, not descending but ascending, pulled upward by an imperceptible force.

I didn’t see the petals, or the oculus, or the beam of light shining directly through it. On the longest day of the year, I chose to barricade myself in my bedroom where I could hide from everything foreign. I climbed up to my bed, lofted high into the air, and tried to fit an American plug into an Italian outlet. The fuse blew, casting the entire building into darkness.

I’m not sure Alaska would recognize us if my father and I returned. He goes to mass now, sometimes twice a day. Then, he takes long walks through the Michigan forests where trees splice the sunlight into streams. Sometimes he goes out of his way to walk through them, and for a moment it’s as if his body is abducted by the light, taken hostage by the brightness, embraced by the glow.

‹ "Consider the Honeybee" by Emily Townsend up "Fireflies," by Jacqueline Doyle ›