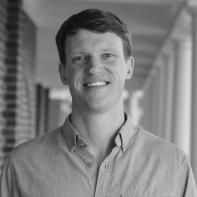 Brad Wetherell's work has appeared in ZYZZYVA, The Missouri Review, Five Points, Salon, Berkeley Fiction Review, and elsewhere. He holds an MFA from the University of Michigan and has been nominated for a Pushcart Prize as well as awarded the Writer in Residence Fellowship from Saint Albans School in Washington, DC. He now lives in Brooklyn, NY, where he is working on a novel.

One night not long after your death, I drunk-walked to a dam with a woman whose name doesn’t matter. We followed the footbridge that spanned the dam and stopped midway to rest against the safety rail. We’d met at a bar, left at last call. She hadn’t bothered to hide her ring and I hadn’t bothered to ask, but when she leaned into me, she joked about toppling over the ledge. “What would people say if we were found together?” she said. “How would our obituaries read?”

This was June. I had read your obituary four months prior.

For a few hours, she’d helped me forget that. Now, out of the pre-dawn gloom emerged that familiar mood to take its dark hold of me. Was I stupid to hope this night could be different? My drink-thinned blood, her head on my shoulder, breath static in my ear. I’d make it different.

I climbed over the rail.

Thirty feet below, cola-colored river foam gathered where the dam filtered the current’s flow. Stray bottles bobbed. Debris congregated, clumped in a thicket it would be hard to escape.

The air was let out of the night with those words. Any magic left, deflated. I had needed to feel needed in some small way, had wanted her, I knew now, to beg me to climb back down.

Instead, I felt suddenly alone out there on the ledge.

The water called and my knees trembled. My feet shuffled unsteadily, the concrete’s sandpaper surface scratching at the bottom of my shoes. The breeze kicked up, my shirt clung, and I leaned forward and back, forward, back, forwardback, arms groping at the cold summer air.

Had you had second thoughts, too, a moment where you grasped for something sturdy? Had you jumped in the end or maybe fallen? What was life if it could come down to balance?

I finally turned around with tiny steps and climbed back over the rail.

“Hey,” the woman said with genuine softness, “are you okay?”

“There’s a body down there,” I told her.

“What?” She rushed to the rail and folded herself over it, gazing down. “Where?” she said. “Are you sure? I don’t see it.”

“It’s there,” I said, because you had to be. You were everywhere.

‹ "Busted Straight" by Ace Boggess up "Folly" by Leslee Becker ›