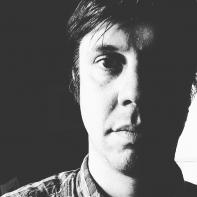 Paul Luikart is the author of the short story collections Animal Heart (Hyperborea Publishing, 2016) and Brief Instructions (Ghostbird Press, 2017.) He is an adjunct professor of fiction writing at Covenant College in Lookout Mountain, Georgia. He and his family live in Chattanooga, Tennessee.

I wake up on my back, looking up at the sky, and I jump to my feet and right away my knees buckle. Down I go. And, of course, I smash my knee on a rock half buried in this—where am I? A field. I’m on my back again in a plowed-up field. Up there, the sky is blue. So blue I think, “That sky is the kind of blue they mean when they say ‘sky blue’ even though the sky is usually pale blue at its bluest and mostly gray, not to mention black at night even when the stars are out. Even when they’re twinkling their little hearts out, the sky at night is still 99.98% black. So, I have to think, about the blue of this sky right now, is this real? Am I still alive? Is this death?” And then, “If it’s death, how pleasant.” And then, “If death is pleasant, at least in the sense that a blue sky is pleasant, somebody’s full of shit.”

At least I can sit up, as in my body bends at the waist even if my hips and thighs and knees and feet don’t work right, not yet. I feel the dampness of the earth soaking through the ass of my jeans and while a dirty wet ass is socially unacceptable, the sensation of the earth itself seeping into my clothes is humbling. I’m glad there is sensation in my ass. Though mere minutes ago—I think minutes, though I have lost track of time or I should say my sense of time, of the tangibility of time, of the passing of light and darkness, of its revelations for the living and the dead—I thought I wanted to die.

My sense of distance is foggy too. I can see, away across the field by the roadside on the other side of a little fence, my little blue Camry. Good ol’ Blue. He’s parked there, the driver’s side door lolling open. I wasn’t carrying any passengers; nobody was riding with me. I came out here alone, distinctly alone, with only a sense of the self by itself, the individual soul as it shimmers and fades to black being how I’d describe myself day in and day out since day one, it being the reason I’m here in the first place. Where I am. In a plowed-up field.

Somebody’s coming. Not on the road. Blue is up there alone too. From my left. Way far away, almost from the end of this field, if this field has an end which it may not, as in perhaps heaven—or hell—is an endless field and in hell one is absorbed by the dirt, sucked into the earth and into oblivion over and over again forever and in heaven one simply, happily cultivates the land with one’s neighbors. Maybe heaven and hell aren’t so much places in the sense I think of place, a humongous, old timey, brick and mortar barbecue pit in the case of hell and a humongous, old timey Pickfair mansion in the case of heaven. More like maybe they’re the exact same thing and they’re simply defined by a particular demonic or angelic instinct that one is bequeathed upon one’s passage through either iron gates burning with fury or pearly gates burning with love. Depending.

Actually, I think he’s real. I think he’s a farmer. A farmer or a demon. Or an angel. But probably real. He’s wearing thick leather boots that come halfway up his calves, real shit-kickers, and faded jeans. There’s a big belly pushing through his blue flannel shirt and tan suspenders barely hanging on and to top things off, a John Deere ball cap with a brim he hasn’t broken in yet. Flat as the field upon which we now meet.

He says, “That your car yonder?” and he extends a bony arm and a crooked finger in Blue’s direction.

The farmer hesitates which is completely understandable because the question is weird, but then he says, “Don’t look like it to me.”

The farmer puts his hands on his hips and looks at Blue and looks back at me, then Blue again, then me.

“Well, I’m trying to figure out why your car is up there on the road with the door hanging open and here you are in my soybean field,” he says.

“It ain’t planted, not yet. But it’s about to be.” The farmer chuckles and that’s what it is, not a sneer but a chuckle, a rumbling, rolling laugh that deflates in his throat and slips out from his lips in a wee merry murmur.

“I’m relieved. That I haven’t crushed your seeds,” I say.

“I can’t put no seeds in with you sitting here, though. See.”

“Well, then, maybe it’s time for you to get back in your car.”

“My legs are not working.”

“Remember when I said I was fine?”

“I’m not fine. No. I’m not. I don’t know where I am, I don’t even know if I’m alive or dead, though thank you very much for your assurances. Observation is key. But even before that, even before I got here, I was very, very, very lonely. More sad than sad, more low than low. I don’t know how to explain it.”

“Wait a minute. Oh. Wait just a minute, sir.” And this came to me not very much like a lightning bolt but more like the way a match might light up a coal mine. A sludgy kind of brightness. "I took a lot of Advils and then I swallowed some whiskey."

"Whatever did you do that for?"

"I believe I was trying to kill myself."

The farmer's jaw drops and up go his eyebrows in the sort of shocked expression a schoolmarm might have if she caught her prize pupil behind the gym smoking and fornicating at the same time. But then his eyebrows, great gray woolly eyebrows, descend to their rightful places on his face and the look that shoots from his eyes in that secondary moment—an intensity that suggests there is no heaven, no hell, no modern world, and no such thing as antiquity either, only his life and mine, the lives of a good farmer and a poor, wayfaring stranger. He sets his jaw too and the muscles underneath his ears ripple.

The very next moment he is trying to sit in the soil next to me. Both his knees crack as he stoops and he holds his arms out like trembling wings and when his ass is about two feet off the ground he lets everything go. Whump. The farmer in the dirt too, he and I side by side. We sit together for a long time while the breeze blows the smell of dirt and manure and hay past us, maybe through us.

The farmer says, “Surely that's no answer for whatever it is that ails you.”

“I couldn’t see any other answer. I mean I have no answers for what ails me.”

“What is it that ails you?”

“Sir, with due respect, there are seven point five billion people in the world and yet. I am so, so lonesome.”

“Have you tried the Lord, son?”

“I did, I tried the Lord. I tried the Lord in several forms. I even handled snakes, but I dropped a cottonmouth and then stomped on it. I think it died. They asked me not to come back.”

“And the Catholics. St. Viator of Somewhere. And then a rock n’ roll church in a converted grocery store.”

The farmer puts his arm around me and pulls me close so that my head almost plunks down onto his shoulder and then he pats my back—hard pats, slaps really, but slaps of reassurance. Slaps that tell me, as I take them, “You’re not alone, son. You’re just on a lonesome journey. You’ll find that spot where they’ve all been waiting on you. A spot that fits you as comfortable as a broke-in boot.” These things I feel the farmer is telling me and so much can be said without words in a farmer’s language in a soybean field.

‹ "Once, Twice, Sold" by Nina Sudhakar up "This Family" by Sara Henry ›