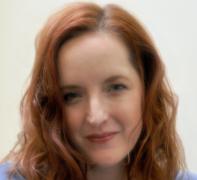 Rebecca Makkai is the Chicago-based author of the novels The Hundred-Year House and The Borrower, as well as the short story collection Music for Wartime. Her short fiction won a 2017 Pushcart Prize, and was chosen for The Best American Short Stories for four consecutive years (2008-2011). The recipient of a 2014 NEA fellowship, Makkai is on the MFA faculties of Sierra Nevada College and Northwestern University, and she is the Artistic Director of Story Studio Chicago. Her novel The Great Believers was a finalist for both the National Book Award and the ALA Carnegie Medal.

“Grief Over the Long Haul,” an Interview with Rebecca Makkai

This interview was conducted via e-mail by Lead Interview Editor Renee Rule. Of the process she said, “Rebecca Makkai’s novel The Great Believers pulls impressive weight in the categories of literary merit and the tackling of a tough subject. So of course, while it may not be the easiest book to stomach from an emotional standpoint, doing so is absolutely worth it. I loved getting to learn more about this book and am so grateful to Rebecca for her time spent on her responses.” In this interview Rebecca Makkai talks about how book ideas evolve for her, defying the limits set on female authors, and a scary recommended read.

Superstition Review: What made you choose to write a novel set partially during the difficult time that was the AIDS epidemic of the late 20th century?

Rebecca Makkai: My novels change so much from initial conception to what you read that I can't say I've ever "chosen" to write the novel I wrote. In this case, I set out to write about an artist’s model in 1920s Paris, and things changed dramatically along the way. My last novel, The Hundred-Year House, is the story of one estate and one haunted family told backwards over the 20th century; that one had started as a short story about male anorexia. In that case, you wouldn't see a trace of the original in the final product, but a reader of The Great Believers will meet the artist’s model, even if she wound up a secondary character.

I'm sure there are a few writers out there who set a plan for themselves and then never stray from it, but most people I know don't work that way, and I think it's vital to stay open to the possibility of a course change along the way. It's not that things happen by accident or chaos—more that as writers, we need to welcome change, and that as readers, we can't assume that authors started with the end product in mind.

SR: The dual-story nature of The Great Believers is quite interesting, particularly because of the fact that the two stories are set in two different time periods. Why did you choose this format?

RM: Again, this wasn't something I set out to do. I was originally writing just the 1980s sections, but ultimately, I became fascinated in my research with the passage of time. I was having all these incredible conversations with survivors, and I was interested in that 30-year gap of time, in what happens to grief over the long haul, and what happens to survivor's guilt, and what life looks like thirty years after you've been handed a death sentence. I also realized I wanted more than one voice in the novel, that there were parts of Yale (my main character)'s story that he couldn't tell himself. I was scared that the second voice would make the book too long, but then I became a bit defiant about that. Men write huge, sprawling novels all the time, and are taken quite seriously for them, when women are often encouraged to shorten their work. I was not interested in doing that.

SR: What kind of research did you do for this book?

RM: It was hugely important to me that I get the details right, even though I was writing fiction. The book's Author's Note covers my research extensively, but the short version is that there was far less out there in book form about the AIDS crisis in Chicago than you'd hope or expect. (When people set out to tell the story of AIDS, they tend to focus, understandably, on New York and San Francisco, which means the stories of other cities have been neglected.) This meant that I needed to do a lot of archival research, and to sit down and conduct interviews with survivors, doctors, nurses, lawyers, journalists, historians, and activists. Several of those people also read the book before it went to my editor, to help catch anything inaccurate or just not quite right.

SR: You write, “It's always a matter, isn't it, of waiting for the world to come unraveled? When things hold together, it's always only temporary.” Is this something you believe yourself, or do you believe that there is a way to be a bit more optimistic without losing one’s grip on reality?

RM: It's funny how this one quote keeps getting pulled out of the book. Once something gets quoted online (something that's always thrilling, really!) it becomes one of the first things people see about your work, even before they've read it. In the novel, this is actually a line of dialogue, and no, it's not my personal philosophy. It's hard to explain the context here without giving some major spoilers, but something rather cataclysmic has happened in the 2015 sections, and a character is talking about the fact that the progress we make doesn't always hold. I love Tony Kushner's Angels in America—I think it's the most important work of art about AIDS—but I find its ultimate message of hope, that "the world always spins forward," a bit hard to believe in these days. My job as a writer is not to put my own beliefs into the book, but to ask questions by having my characters voice multiple, often conflicting, thoughts. This one line is in some ways pushing back on Kushner.

SR: You teach in the MFA programs at Northwestern University and Sierra Nevada College. How does being a teacher and guiding students affect your own writing and the way you think about the writing process?

RM: It's definitely made me more conscious of structure, if only because I'm always reading my students' work for structure and arc and momentum, and I'm rarely reading published work for those same things. When you see student work you're basically always seeing an early draft of something in progress, and so you're going to see unevenness and start noticing where the weak points are. That helps my own writing, for the same reasons it helps my students to workshop each other.

SR: Who is your favorite author and why?

RM: I don't have a favorite author, but I want to encourage everyone to read Shirley Jackson's The Haunting of Hill House, especially if your curiosity has been piqued by the Netflix series. The series has basically nothing whatsoever to do with the novel, beyond having borrowed some character names for some (completely unrelated) characters. The novel is a masterpiece, and one of the scariest things you'll ever read.

RM: I'm looking at it right now. It's got about fifty people in it, and a fairly disgusting layer of crumbs, and three baristas who normally wear green aprons but are today wearing Minnie Mouse ears and a penguin suit and some kind of zombie outfit because it's Halloween. It'll be tolerable for another month or so before the Christmas music starts.