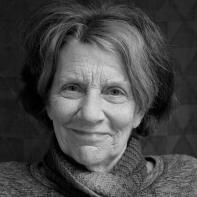 Abigail Thomas, the daughter of renowned science writer Lewis Thomas (The Lives of a Cell), is the mother of four children and the grandmother of twelve. She is the author of six previous books, including the memoir A Three Dog Life, which was named one of the best books of 2006 by the Los Angeles Times and The Washington Post. She teaches writing and lives in Woodstock.

My mother dreamed she flew, but always between the lions at the NY Public Library, six feet off the ground, back and forth. My youngest daughter flies like Superman, arms outstretched, she zooms into the sky. A friend rides a bicycle until he is above the earth, where the furious pedaling continues. I don’t do sky, and never soar. I lean back into air, assuming the position I take in the ocean, knees and shoulders and head above water, the bulk of me sitting as if in a chair, then I begin to rise, floating higher and higher until I touch the ceiling. There is always a ceiling. It’s not about how high, it’s that I can do it at all. The process involves precise amounts of effort and effortlessness. The old story is if you dream you are falling and actually land, you will die. Sometimes I fail, but I never fall. It is a gradual descent, like a slow leak in an old balloon.

I used to think flying dreams meant sex, something Freudian to take the fun out of it. Given a choice, I’d rather fly than fuck, and I prefer to think everything is about flying, including sex and death. I remember sitting on the corrugated roof of a shed in New Orleans when I was small, holding an open umbrella and waiting for the courage to jump off and drift to earth. I tried this over and over and it didn’t work, but there was always the next time. The other night I dreamed I was floating on my back down a long hallway, gurney height but no gurney, feet first. Someone was guiding me with the gentlest of touches. I had died. I didn’t know where we were headed, but no matter. There was no bright white light, no door ahead with a sunny glow, but I was still aloft.

‹ nonfiction up "Every Bird in the Nest" by Amy Stonestrom ›