A Poem by Jess Williard 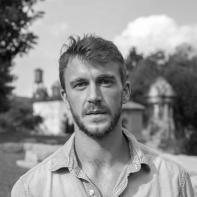 Soybean rust has taken the fields between Verona
and Madison, a checkered quilt of bronzed low-growers
and stubbled dirt whirring past open bus windows.
The pressure at this speed buffets a pulse over the heads
of sixth-graders sprawled in bench seats, held at attention
as a kid peels off his sock, sticks his webbed foot
into the aisle and offers Free samples of the touching.
It could be a kind of awe in which they are held
because no one reaches out. The wind barrels through.
And though last week he sat in the office for eight
straight hours after a counselor heard him say Pussy
and slap a smaller boy, here his bare foot is lighted
like a proscenium centered in a half-circle of pre-
adolescents. Free samples of the touching, he says
again, wags the big toe to demonstrate its wing
of connection to the others. When he tires there,
leg extended, and begins to feel less proud,
look to the carpet on which that foot is set twelve
summers later, to the bed from which it came,
the sheets in which it was wound, the leg it touched
and shared the night with, to the owner of that leg.
She is tired after their evening dancing salsa, the cross-
body Copa checks rubbing blisters into her ankles.
She is kind and has made things right for him, given him
a chance. And when, twelve summers beyond that, some
sense of loss pulls his stare from the back patio like silk
from a magician’s sleeve, stop—give it another chance.
Because his daughter is there. She is learning a language
she deserves ownership of, in some way, and a right to draw
her own conclusions. The first tender rains have pressed
into the river basin and her only immediacy is the muffled footfall
that carries her beyond herself into the ring of trees in the yard.

A woman I didn’t believe told me she’d try anything once,
once, a phrase I’ve since heard dozens of times with varied
degrees of conviction. I didn’t learn anything from her,
which is a strange conclusion to come to after having loved
a person. Even so, I have learned that if someone
lets you in close, you have been given a chance. Even
when it doesn’t feel like that. It felt like my heart beating
in my face when the older neighbor girl cornered me
in her garage and demanded I tell her how much I liked
her. Plumes of dust rose from the corner where she
parlayed my silence into hissed, repeated orders: Tell me.
How much you like me. I liked her, I think. I began to cough,
said, A lot. I wish I could have known how much more
we both needed. Years later her father, a man I had
never believed, showed up to my high school graduation
party and told me hunting, for him, was a kind of prayer,
the solitude of staring from a tree stand this devotion
he felt indebted to for giving him access to the universal spirit.
But it doesn’t matter what I believed. Being put together
in any way is important. He touched my shoulder
when he left, said congratulations and drove further
into the century, divorce and his daughter’s addictions.

The sock, now, has returned to the foot. The kids to their seats,
the soybeans to their season of drought and silence. At dips
where the bus slows or intersections where it stops entirely
the air stills and releases the fluttering bangs of kids
too young to care about being delivered late to their families.
Because it is late, and dinner is made. Everyone is tired
from their hours of trying. Someone falls asleep
on someone else’s shoulder. Outside, it’s all starting
to look the same: the slap, solitude. Spinning outside a cantina
on Park Street until dizziness has made the twilight drunk,
and wonderful. And the bed—how she reaches for his back
as he slides from the sheets. Muscle pulled from the hide
of a six-point buck, set to steam in the snow. A cigarette
bobbing across white acreage home, a bus tunneling past,
and in the back seat a boy offers his foot with a look as if
I’m not going to.