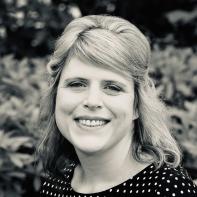 Sara Henning is the author of two volumes of poetry, most recently View from True North (Southern Illinois University Press, 2018), which won the 2017 Crab Orchard Poetry Open Prize. Her other collections include A Sweeter Water (2013), as well as two chapbooks, Garden Effigies (dancing girl press, 2015) and To Speak of Dahlias (Finishing Line Press, 2012). In 2015, she won the Crazyhorse Lynda Hull Memorial Poetry Prize, judged by Alberto Ríos. Her poems have appeared in Quarterly West, Crab Orchard Review, Witness, Passages North, RHINO, Meridian, and the Cincinnati Review.

How many losses does it take to stop a heart,
To lay waste to the vocabularies of desire?
—Dorianne Laux, “Last Words”

These days, my mother’s sultry
hoodoo is a siren call of satin,

an effigy ribboning its lost body
sheer through my lungs. Calla

-shaped, her petals pilfer a dusky
exodus so hard and fast I believe

a tumor in my brain is the root
of this olfactory seizure-of-the-soul,

some cellular malware triggering
her lapsed kingdom come. Every

-where I go, my heart is hijacked
by menthol, a rich bevvy of ash.

It started with dreams. Weeks after
she died, a field of petals, flies

clung as if to the skin of a plum.
Even in dreams, death is the mother

of beauty2. In another, liver necrosis
tarnished her face to a nude rush

of ochre, as if cancer were a boy
smitten with a spray can’s reckless

bliss, a train depot, this child
offering up his name-sake in strokes

of graffiti. I’m looking for smoke
like the lush tail of a fox. Smoke

like a pleasure instead of mercy.
Always some breach of body

and air. The last time I saw her
alive, she was a corpse shitting

blood, not a mother. But now,
she’s minx-heady, a musk

in the heat. She’s silt on my skin.
What’s left of her body—

In the belly of every summer day is a God
taking its first breath, so I learn to call it praying,
my mother forsaking the AC for a grace called smoking
in the car. I watch her pry the window’s handle as it jammed

mid-crank, clench the sultry juts of plastic cutting
her palms. I watch her jimmy it loose for any cool
we could ratchet through glass. I watch my mother pull
on a spit-slick filter, exhale a dusky ghost

ribboning through the car as we sweat and cruise.
Each hit a blitz of nicotine. A prophesy of what’s
to come. I watch her brake, then brandish her arm,

her body a human seatbelt shielding my skin.
I close my eyes. I steady myself in my seat.
From another car over, I look like I’m on my knees.

LEARNING TO HIT MY MOTHER


I was five when our tom tore his way into my box
spring mattress, helixed his body through a grid

of metal and cloth. Begin here, with vanishing. A mother
escalating a spark from thin air. I watched my mother’s

fear ricochet against our duplex’s walls, watched i
throng the windows like a trapped dragonfly,

another winged prisoner of war. I watched my mother’s
vision—fur grafted to tires, guts detonated on the highway’s

shoulder—spiral into fixation. An animal winding
between ankles, a girl too lazy to chase him down. I felt

myself leave my body, float near the ceiling fan
like a hurt helium balloon, while my mother’s rage

vibrated across the house—Rapid-cycling Bipolar II,
mixed episodes. When the cat slunk from the mattress

hours later, warm with hunger, she said nothing.
Repeat, begin again. In my dreams, my mother’s taking

my bedroom door from its hinges, my back pressing
against it, my hands covering my ears. I wanted

to turn this poem into something luminous—a trick
of the heart, a paradox more radical for its sincerity.

I wanted a cat sleeping in a mattress like a field
scarred by lilies, or a girl, her fist unfurling like a sun

-lacquered blossom. I wanted this poem to offer up
an image more beautiful than the truth—I was sixteen

when I balled my fist. Tumors would blossom years later
at the site of impact like a field of blown honeydew melons.

I DREAM OF MEETING MYSELF, AGE EIGHT4


I hear you call the sky dusk-raw, a doe infatuated
by a highway encounter with a truck. The axle painted
by her skull, you say, must have come in hot before

it fell away from her body. I know you, child, by your
metaphors, the way you ride every rhetorical leap
until it changes you. The animal-sky, you say, is love

turned inside out. Her skin, you say, is a too-tight dress.
But what of her just-dead eyes? Sweet with flies.
What of her guts? A bag of marbles loose on the highway’s

shoulder. You have always made song from trans
-formation, the most un-seeable miracles of the heart.
I’ve watched you lay to rest cicadas desecrated

by lawn mowers, call them little surges of the soul.
I’ve seen you cup baby squirrels in your palm, call
each one a hot mess of fur and claws. I’ve seen

the way worry slicks through your guts when
SUVs ferrying the others to soccer games and music
lessons have come and gone. In the dream,

I’m the teacher coaxing you with a game of Simon
Says while our mother’s weather-beaten two-door
bruises its way closer. You can call the Rice Krispies

you’ll eat for dinner while she smokes on the couch
meteors colliding with the lost worlds between your teeth.
You can watch their shrapnels of civilization float

in skim milk. You can bite the inside of your cheek
as you wait for sleep to take you, run your tongue
over the scar already starting to form. This is

the way you have learned to pray. Years later,
the taste of blood will remain indistinguishable
from scar. But now, when she honks her horn,

I’ll watch you grab your lunch box. Through
the window, I see her—thirty-two, tight jeans,
Clairol bleaching her hair. Cancer may already

be murmuring its secret inside her, longing to build
its shrine to a darker god. Before you go, you hug
me, and this is how I’ll wake. Years from now,

shattered by grief, I’ll see you run-skip your way
toward our car. I’ll watch you glide through years
spent already hating your life, though you’re good

at fooling yourself. You’ll smile at our mother,
push your small weight into the seat. I can read
your lips. I watch you lie through your teeth.