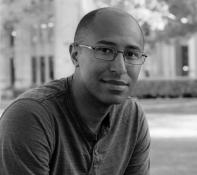 Cameron Barnett lives and works in Pittsburgh, Pennsylvania, where he teaches middle school language arts at Falk Laboratory School and is an editor for Pittsburgh Poetry Journal. His recent work has appeared in The Florida Review, The Minnesota Review, Rattle, and IDK Magazine. He holds a Master of Fine Arts from the University of Pittsburgh, and his first collection, The Drowning Boy's Guide to Water (Autumn House Press) was a finalist for an NAACP Image Award. Cameron’s work explores the complexity of race and the body for a black man in today’s America.

by a placing of hands on car, the draw of gun, the howl of fear
that a body may be a weapon, no matter how prone or probed.
The truth is that the force of a bullet has two momentums.
The truth is that any two feet can be standing in the wrong place.

There is a muck in this world none of us know what to do with,
but the truth is that some of us get to scrape it from our boots.
A thin blue line is all that separates. The road to good intentions
is paved with black bodies—I am just a lowly welcome mat at the end

my feet? Who will wash them if they are clod in murder? It seems
you only need wear pearls to be acquitted—it seems your skin must
resemble pearls for this to work. I’ve read this syllabus, found this line
curled along the thin blue of America: His death was his fault.

Is the bridge to salvation built with the bones of black folk? I refuse
to believe Freedom’s door lies at the end of a perforated loved one,
or that its knob turns in your reddened hands alone. Does it matter
to you if I say black bodies, or black lives, if all I am to you

is a good place to put your feet? Nothing will stop you,
it seems. Nothing feels more American than raking muck
from your boot, then stepping on by.

This became my first ghost: the cold cup of a stethoscope
to my infant chest, an echo deep in a doctor’s ear, the sound
she heard, named it murmur—a swoosh in the space between
the beatings of my youngest heart. When I’d run around
as a toddler, my mother always anticipated me falling down
and not getting back up. Later, my father’s stethoscope told us
there was nothing there—this became my second ghost.
I played every sport I could growing up. I ran until no kid
in my class could out pace me. I beat my heart up and down
playgrounds and courts, through grass stains and bloody knees.
I wanted to learn how to make my heart sing, and I wanted
to silence it too, but always my mother’s gaze was heavy on me.
Be careful she would say, and Be careful dad would say. I ignored them.
When I did karate as a high schooler, running up against men
twice my size, my mother said Be careful and my father said Be careful
and because I didn’t care for my heart then, I was careless.
Heartbreak came when I fell in love for the first time,
and my mother said nothing and my father said nothing,
and years passed with no echo to interrupt the ending,
as they held me, and we all listened to my third ghost
singing in the space between the beatings. And now I run, miles
a day, for my health; and now I am a haunted house of scars;
and now I always fear, like too many men in my family,
that I will die because of my heart; I always fear, like too many
black men, that a heart is not enough to keep me alive. We are
all ghost stories, silent chests, a heavy wager of collapse,
and isn’t this what all our mothers fear—the fourth ghost:
every echo of love misplaced somewhere deep in our hearts,
reconvening over us in our stillness, murmuring
Be careful.