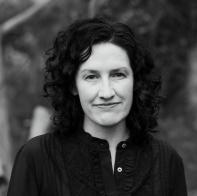 We visit Amsterdam in late February, the end of winter. The canal houses were too expensive. Our hotel is a beige tower block that could be anywhere. We are on the top floor, in a smoking room, although we booked non-smoking. He argues the point with the concierge, but nothing else is available.

Our room is musty and smells plainly of old cigarettes.

I step outside onto the balcony and I am intoxicated—electricity fizzles in the damp air, turning the night sky purple.

On our first day, we walk to the Anne Frank House on Prinsengracht in the Jordaan district. We climb the stairs higher and higher to the Secret Annex. Outside the narrow windows, the morning is white.

In Anne’s shared bedroom, the drapes are drawn and the light is stained yellow. The air is thin. Her walls are dotted with postcards and clippings from Libelle magazine. There are pictures of little girls with blonde, curly hair, pictures of Princesses Elizabeth and Margaret as children, and Hollywood stars Greta Garbo and Ginger Rogers.

Anne wrote that she had transformed the walls into one gigantic picture.

“Can you believe this?” he says and recites from the guide—seventy-five square meters—eight people—July 1942 to August 1944.

I cannot resist this picture—three-year-old German Countess Nayhauss-Cormons, wearing a long organza dress and a bow in her pale hair, taken in a sunny Karolinger Garten, Berlin.

We step outside and young teenagers are everywhere. A school group waits to go inside. They talk and laugh, jostle each other and read their phones and text.

“Where are you going?” he says, grabbing my arm. “Stop rushing.”

He puts his arm around my shoulders and we begin to move, but it is slow, his fingers digging into the sleeve of my coat.

A block away, we sit beside each other in the window of a coffee shop and stir chocolate sticks through cups of hot milk. Lou Reed sings “Perfect Day”.

He squeezes my thigh.

“Amsterdam is known for its diamonds,” I say.

He raises an eyebrow. “Is it?”

At the Rijksmuseum, there is an engraving entitled “Big Fish Swallow Small Fish” by Pieter van der Heyden, dated 1557. A massive beached fish spews little fish. A man slices the underbelly with an oversized knife, where more fish spill out. Other fish in the water, and on land, eat fish smaller than themselves. In the foreground, a boat carries a man with a boy. Below, is a Flemish inscription—“Look son, I have long known that the big fish eat the small”.

In a cafe, we take mushrooms. They taste of dirt.

We go to a bar that faces a fire station and Amsterdam is ablaze, those many-million dollar, restored canal houses, burning. The fire bell rings and rings. It doesn’t stop. I count numbers one to nine out of order. I do it again.

I crawl into bed.

“Why are you crying?” he says.

He leaves and he doesn’t come back for a long time and the bed falls away beneath me, over and over.

It is midday. I am still in bed.

He stands over me. “Would you please do something?” he says. “Buy something.”

He grabs his phone. “Online. What’s that shit you love? Sephora. Come on.”

“I don’t recognize you right now.”

“Here. New arrivals. Fuck. A mascara from Dior. Check out the curve on that wand.”

“Are you making fun of me?”

He bends and kisses my mouth. “I want to make you happy.”

We watch the evening news, leaning against the bedhead, drinking wine. I still wear pajamas and he is clothed. He has stopped saying we wasted the day. The newsreader speaks rapid Dutch while behind her Syria explodes.

I straddle him and unbuckle the belt on his jeans. He seizes my wrist.

“Let’s call her Betsy,” I say, softly. “Betsy wants to please you.”

He catches me around the waist and hauls me to his chest. “Betsy. Betsy. Tell me. Where is my wife?”

He takes me to the Bloemenmarkt, an historic flower market on floating barges.

He waves an arm and says, “Bright. Pretty.”

We walk amongst tulips and geraniums.

“How are they blooming at this time of year?” I say.

In that instant, the red and pink are too intense, too vivid. The white is too white. It hurts my teeth.

Anne Frank stuck to her bedroom wall a postcard from London Zoo which she received from her mother, Edith, in 1937. Edith was visiting family and friends in England. The picture is entitled “Chimpanzees’ Tea Party”. Four chimps sit on chairs at a table. Chains around their necks tether them to the ground. They eat from plates. Edith wrote that Anne and her sister, Margot, “must see this zoo”.

Edith wrote, “It rained a lot here yesterday, but today the sun is shining.”

We walk along the Singel, the water shifting between gray-gunmetal-lead. The afternoon light is Vermeer. The houseboats are fantasies of coffee mornings, beer afternoons and no work.

“We could live here one day,” he says.

I laugh. “You say that about every canal city we visit. Venice? Bruges? Remember?”

He smiles down at me. He is a whole person. Every bit of him is right here beside me and I am holding his hand.