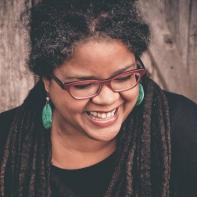 Leesa Cross-Smith is a homemaker and writer from Kentucky. She is the author of Whiskey & Ribbons (Hub City Press, 2018), Every Kiss a War (Mojave River Press, 2014), the forthcoming short story collection So We Can Glow ( Grand Central Publishing, 2020) and the forthcoming novel This Close To Okay (Grand Central Publishing, 2021.) Whiskey & Ribbons was longlisted for the 2018 Center for Fiction First Novel Prize.

“Multitudes and Realness,” an interview with Leesa Cross-Smith

This interview was conducted via email by Interview Editor Griffin Sandidge. Of the process he said, “Leesa Cross-Smith’s passion for writing pours out of her heart and seeps into each word of Whiskey and Ribbons. As Cross-Smith mentions in this interview, she writes what she wants, when she wants, something I greatly admire. It was an absolute pleasure to interview her.” In this interview Leesa Cross-Smith talks about being a proud Kentucky writer, creating real characters, and writing from the back of her car.

Superstition Review: First of all Leesa, thank you for agreeing to do this interview. I really love how you delve into the complexities of couple’s relationships in Whiskey and Ribbons. One of the lines that stood out to me was, “There were a lot of ways to break a mother's heart, and unfortunately, I found several." Police work is a dangerous job, and falling in action is a possibility that many families face. Throughout Whiskey and Ribbons, you interweave the stories of characters in a way similar to a time-lapse photo. How does telling stories from the point of view of past and present affect the reader’s perspective?

Leesa Cross-Smith: Thanks so much for reading and for inviting me to do this! What I wanted to do by diving into both the past and present was give the reader the full scope of Eamon and Dalton's relationship and their families. I keep Evangeline's POV to mostly present and use present-tense for her POV. Her POV is a bit purposely claustrophobic at times because she's grieving and has a six-month-old baby and it's very intense. The men, their stories are told with a bit of a wider lens and her story is included in that. I want the reader to get to know all of their hearts intimately, but in different ways. Evi's, in a super-close way as she's dealing with being recently widowed. Eamon's, with the knowledge that he is killed the first page. And Dalton, as he searches for his biological father and finds his place in the world. The past helps us recognize how and why we got to our present and the present can shine a light on our past, depending on how we look at it.

SR: Your writing has heavily drawn on life in the South, and Kentucky specifically. What about life in Kentucky inspired you to write?

LCS: I live here and love here. This is my heart. Growing up, I wanted to read books about black girls and black people and people, in general, living completely normal lives in Kentucky. It's not some kind of grotesque over-exaggeration of southern life. Kentucky is beautiful, the south is beautiful. It's both completely like and unlike living anywhere else in the United States. I'm very proud to be a southern writer, a Kentucky writer.

SR: Dalton is a gentle and skilled piano player. Eamon is a noble and brave cop. They both complement Evangeline in different, but effective, ways. How did you decide what characteristics you wanted them to have?

LCS: Eamon was always the “leader” of the group because I needed both Dalton and Evi to be shattered in the same way when he is taken from them. I always knew I wanted him to be a brave, kind, intelligent, but flawed person. He's not really afraid of anything until he marries Evi and she is pregnant. Then and pretty much only then, is he aware of his mortality and the dangers of his chosen profession. He is afraid of not being there to take care of them. And Dalton was always the artist-heart in my mind. He was raised by a concert pianist, a tender-hearted woman who was very sensitive to the world and to pain, and he grew up feeling that. So Dalton, stepping in for Eamon and taking care of Evi when Eamon is killed, that was already sort of hardwired into who Dalton was and who he was raised to be. I chose to write about good-hearted, kind men even though sometimes the world reminds us that they are at times few and far between. I am married to one. I do have an excellent reference point. And I wanted Evi to be real and flawed, as well. We see her at her most broken point. She's lovely and beautiful and jealous and messy and complicated. That's how I always want and try to write women. With multitudes and realness.

SR: What advice would you give to writers who want to tackle tough issues such as criminal violence?

LCS: It's heavy stuff, for sure. I chose not to focus on the shooter, the person who killed Eamon. I never mention anything “important” about him or give him a name. I did that purposely because it's a random act of violence. So many families have to endure the horrors of a random act of violence and so many unanswered questions. I don't think I have any advice for writers re: this, but I do know that what works for me is writing about what I want to write about when I want to write about it, and I don't really worry about anything else.

SR: Whiskey and Ribbons is your debut novel. What was is it like shifting from writing short stories to a full novel?

LCS: It was pretty easy for me because I've always written longer things. Whiskey & Ribbons is my first published novel, but I'd written two other novels before it. So while I was writing short stories and getting them published, I was always still writing longer pieces too, as well as working on novels. It reminds me of that line from Alice in Wonderland when the March Hare and the Mad Hatter are talking to Alice and they simply tell her to start at the beginning of the story and when she comes to the end: stop! It's funny and true and that's how I write.

SR: In an interview with Electric Lit discussing Whiskey and Ribbons, you said that you started writing it when you were in college. How did your writing process change as you transitioned out of university life and into motherhood when your daughter was born?

LCS: Before my daughter was born, when I was in college and right after, when I was working at the newspaper writing obituaries, I wrote, but not with any sort of schedule. I just wrote when I felt like it, with no real “goal” in mind. I just love to write, so I wrote. But after my daughter was born and after my son was born too, I considered writing with an end goal in mind. The goalpost moved, depending. I wanted to write a short story and submit it, get it published. Then I wanted to do that again. Then I wanted to put an entire collection together, etc. Once both my kids were in school all day, I had the time during the day to be able to do that and to work on putting a collection together. I spent a lot of time writing and working things out. And even now, I write almost every day and if I'm not writing, I'm editing or thinking about writing or thinking about editing. I'm a bit of a workaholic, but it works for me.

LCS: I write in the chair in my living room sometimes, but most of the time when I'm heavy into working on something, I write on my unmade bed in my bedroom. Usually with my cat and heating pad and tea. I don't write out in public spaces because I'm easily startled and can't really find peace in a busy coffeeshop, etc. But sometimes I do write in the back of my car during carpool while I wait for my kids to get out of school. I've written some of my fave pieces that way.