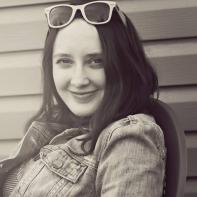 Emily Banks lives in Atlanta, where she is a doctoral candidate and poetry lecturer at Emory University. She received her MFA from the University of Maryland and her BA from UNC-Chapel Hill. Her poems have appeared in numerous journals including Cimarron Review, Free State Review, storySouth, and Yemassee. Her first collection, Mother Water, is forthcoming from Lynx House Press.

Poem for the Juvenile Cardinals

In all species, teenagers are the same,
abundant and chatty. They fill the tree

above me like a subway car, then clutter
to the balcony to pick at seeds

as if they’ve been starving. The doves
push them aside, annoyed by how they take

up space and trip over their own feathers,
perpetually in the way. Bright orange beaks belie

the red to come. For now, it’s only tufts
of new plumage stuck out

at odd angles from the mottled brown.
They look confused. Before majestic crests

are erected, they sport limp mohawks
flopped off to the side. They shake their heads

to move them from their eyes. I think of you,
old friend, the summer you came to see me

with your face covered by slick hair, ironed
with a straightener to fall like curtains closing

over you, and I knew something was wrong
but didn’t know. The difference is the cardinals

as mated pairs replace this molting crew
still guessing how their colors will come in.

Safe, now, in numbers, they only want to break
open the sunflower seed’s hull to find

the sweet morsel inside. They turn it over
like a puzzle in their bills, learning where to apply

a swift pressure. And when, in their frenzy,
they stumble off the concrete edge,

they spread their wings discretely and ascend
into the air, making it look intentional.

A boy is burning a girl’s hair
with his Zippo lighter, watching it
erupt, then fizzle with a static sigh.
Going home from school,
that all-day ache heavy on their backs,
they use bad words loudly
to shock the old women across from them
who, if they hear, don’t react,
having heard worse.

The girl will not admit that she’s afraid,
that she still, at heart, believes
her mother’s words on taking care.

She likes the boy. She has never been touched.

She pictures herself burning,
hair a fiery hood around her face.
She pictures melting into the blue plastic seats
of the bus, only her eyes
glowing like hot coals in a dying fire pit,
like the sticky black gum on the streets
that glistens when the night lamps shine on it.