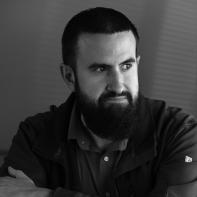 Brandon Lewis received his MFA from the Rainier Writing Workshop at Pacific Lutheran University. His poetry has recently appeared in Talking River. He is a high school English teacher and lives near Centralia, Washington, with his wife and four children.

Mothers Aren’t Supposed to Give Up Looking

but I don’t know what else to think
when a death certificate falls out
of a binder she’s kept for twenty-five
years, other than it was either this

or go back to Zoloft and boxed Chablis
for breakfast everyday, this or something
drastic like a mental institution,
and she might believe she can handle

feeling guilty if it leads to some peace,
if it leads to fewer double-takes
while driving through town, no more
searching Facebook like a stalker.

There’s a show I’ve seen on the rapture,
two percent of the world’s population
going poof all of a sudden, leaving
the rest to mourn and process the inexplicable.

It’s just TV but they got the grief
right, a sort of wound that doesn’t close—
that many don’t want to close.
Characters sobbing like I remember her

once on the phone, snot running
down into her mouth. By forty-eight hours
the chance of finding him alive
is fifty percent. After seventy-two hours, zero.

I toss the certificate on the table
in front of her. She looks out a window
at the backyard, a swarm of starlings
squealing in trees, Mt. Baker on the horizon.

She tells me she can’t explain why
she had it done, maybe something to do
with forgiving. I sense she’s wanted
to ask if I keep an eye out for you,

and I’ve had the answer ready a long time.
I think he’s dead. But only because
I have to. Watching her carefully tuck
the paper into a manila envelope, lick and seal

the flap, it occurs to me that our family
doesn’t talk about you anymore—
the man that could be married and raising
kids of his own someplace far away

like Texas or Alaska—nor the you in the binder,
his homework and shitty report cards,
his hair pulled off a brush. I imagine
her hope in tatters, an old sheet whipping

around on a clothesline. I’ve wondered
about the human leg that was found
in the Skykomish River the week you went
missing. If she ever wishes it was yours.

The fact is I never really knew you,
not to say I didn’t try in the years before
you moved out, didn’t once slip

into your room when you weren’t home
and brush my fingers over the strings
of your guitar, snoop through drawers,

or stand against a wall and stare at women
in bikinis on a beach, at Iron Maiden
album covers. I want to think there was more

to your Indian-burns, to the full weight
of your body pinning me down
as your finger jackhammered my chest.

I want to believe you were more
than a twenty-year-old drug dealer,
more than the sort of person who’d vanish

to avoid paying off a two thousand
dollar debt. I catch myself saying heroin
when anybody asks what happened

to you, trim the story down to three syllables.
Perhaps it’s better to let people think
of you flopped down on a bed, your eyes

rolled back, mouth gushing foam
like a washing machine. I remember
the first time I thought I’d never see you again.

I’m six or seven, sitting on a green
leather seat in a ferryboat on the way back
to Anacortes, you left in a Lopez jail

I can see myself looking out a large window,
a video arcade on the glass, waves
outside spreading away in the decklights.

But the rest is gone, a coastline eroding.
I heard once that the dead are preserved in things
they made in life, in objects owned.

If true I’d see you slumped over at a table
in the middle of the night thirty years
ago, unable to sleep. Sketching VW bugs,

eyes, cartoon faces. Bracelets around your wrist
clinking. What I wouldn’t give to walk up,
peer over a shoulder. See you writing

your name, first, middle and last, filling the entire
page as if you can’t remember who
you are. And I could try my best to tell you.

I didn’t think you’d follow me
all the way to Vermont, showing
up this way in a laundromat

at six in the morning like one
of those dogs tracking its owner down
after years of separation.

For a minute all I can think
about is the twenty in my wallet
and a Safeway across the street,

watching my clothes flip past
the window in a washer door.
I’d forgotten what you sounded like,

that Come on, no one will know.
I’d forgotten how much I loved
you hunting me, the sudden spike

of adrenaline, the salivation
that comes with yielding. We used to
meet up in hotels, in my car

most nights after work, go for walks
around Green Lake. I used to
leave my two toddlers home alone

by themselves just to see you.
Once we went to Rick’s together,
got a lap dance (you wanted

to watch), and ran out without paying
the girl. That wasn’t even toward
the end when we didn’t care

anymore, stroking me off with your feet
under the table in restaurants,
quickies in bathroom stalls, the one

arrest in Everett for road head.
I have five coins in my dresser drawer,
one for every year I’ve tried to

put you behind me. So why now?
I ask. How did I not see you coming?
A guy I once met in Olympia

We were sitting on a bench by
the Deschutes, watching mallards drift
along the bank. Truth is, I know

exactly where this leads and knowing
has never helped. Not the waking
half-naked in a park, in an alley,

on the backseat of a car I broke into.
Not my wife’s messages left on my phone.
Not the missing hours in between.