"This Family" by Sara Henry 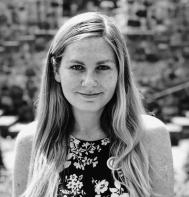 Sara Henry's recent fiction has appeared in Hobart, BOOTH, and The Adroit journal, and is forthcoming in The Tahoma Review and The Cortland Review.

They go to war with flashlights. They take them from the box labeled Storm in the garage. The ground is dry and cold, a few tough sprouts still listening for water. The four of them—father, mother, son, daughter—take four flashlights and walk to the attic. There is anticipation in the air, but not for a storm. There are bats roosting in the wooden beams. Dark winged things, sucked through a crack in the high window.

“What are we gonna do when we find ‘em?” Lyle asks his father, watching him pull down the ceiling latch in the laundry room, conjuring a staircase.

“Good question.” His mother snaps. She climbs up first, all legs and arms in a thin teal bathrobe. Her body moves like she’s angry even when she isn’t.

“Let’s see how many are up there first.” His father replies. “How many do you think there’ll be, Ro?” He motions for her to follow her mother.

Ro is silent. She’s seven and hasn’t found her words yet. She only knows how to take images in, sharpen them like arrowheads. While she’s climbing she takes in the way her hand looks when she grabs the metal. Like something that’s hungry.

“There’s gotta be hundreds,” her brother Lyle offers as he scales the ladder.

The four of them stare up into the shadows of the attic. Their beams of light stab the dark, looking for movement. A pair of wings flaps from the left ceiling corner to the right, tugging a whispered there from Lyle.

“These are silver-haired bats,” his father says, his voice lit like a campfire. “They use sound waves to see. It’s how they survive in the wild. Echolocation.”

“Can you say that word? Echolocation?” Ro’s mother looks at her as she sounds out the word, her green eyes narrowing in the dark. It makes her angry that Ro barely speaks. Angry enough to snatch Ro’s hair, demand that she answer. Not here, though, in the presence of men. When she is grown, Ro will recognize this violence as a kind of love.

“Another one!” Lyle points.

“There it goes,” his father echoes softly, mystified. He looks into the wooden beams like he looks into the metallic downturned eyes of Jesus on Sundays. His brings his hand to his mouth, his chest filling with air. The astonished man next to Ro looks both familiar and new.

Silence falls on them. It’s the same silence that falls on the church after communion, when everyone’s supposed to pray. The beams of light crisscross tenderly. They search together, pulling bats out of the dark. The animals, with nowhere to go, stretch against the wood they were fooled into believing was sky.

“There’s at least four. Christ, Richard.” Her mother’s urgent voice finds every corner of the attic, crushes the magic of the flashlights to batteries and bulbs. “We need to get rid of them.”

“I’ll call the exterminator first thing,” He says into the cavernous ceiling.

“How long have you known they were up here?”

“You’ve been coming up here for months, to organize.”

“I never saw them. They must have gotten trapped this week.”

Ro knows her mother is right. She can see the shame on her father’s face. If Ro had the words, she would tell him it’s okay that he did this. That he hid these bats from them like someone else would hide cocaine. That he stole away and stared into the dark of his house to feel something.

Ro’s mother isn’t angry. She’s surprised at what her daughter has done. Her eyes search Ro, who is voiceless but not without something to say. She says it with a hand on an arm, pressing. A dropped flashlight. Ro asks her mother to stay, to realize that these misled animals are saving them. This moment will stay alive inside Ro. She’ll return to it like a sanctuary, because there will be pain after this. This family will break itself. But not yet. Under the beams of light and wood, they are still children. The flashlights still shine. The wings, they beat.

‹ "Blessed Assurance" by Paul Luikart up "The Wallet" by Sarah Hutchins ›