"Thank You Notes" by Marlene Olin 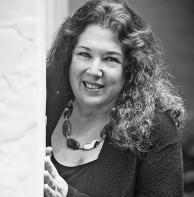 Marlene Olin was born in Brooklyn, raised in Miami, and educated at the University of Michigan. Her short stories have been published or are forthcoming in journals such as The Massachusetts Review, Eclectica, The American Literary Review, and Arts and Letters. Her work has been nominated for the Pushcart as well as the Best of the Net Prizes, and for inclusion in Best American Short Stories. She is the winner of the 2015 Rick DeMarinis Short Fiction Award and the 2018 So To Speak Fiction Prize.

To The "Gang" on the Fourth Floor

Thanks so much for the lovely floral arrangement that you sent to Mom's funeral. A circle of hydrangeas with the world's largest bow-- just what she would have wanted!

To be honest, I had no idea where to put it. What with Mom being cremated and all. I mean where would the thing hang? We were sitting in the chapel. Two, maybe three pews were filled. And all I could think of was a horse racing through. You know. A thoroughbred. The jockey's on top, his knees bent, his arm flicking the whip. The horse's a blur, its ears back, its tail flying. And meanwhile the horse is wondering, where's my arrangement? Where'd my fucking arrangement go?

My people, by the way, don't do flowers. We're too practical. Next time send food. Or make a donation to charity. You know. Kreplach. Cancer research. My name is Eleanor Katzman, for Christ's sake. I take the holy days off in September and stream NPR at my desk. We've worked together for twenty-two years. You haven't figured out that I'm Jewish?

Thanks so much for the heartwarming eulogy. A few stragglers from the assisted living were making their way in, punching the floor with their canes, scratching the linoleum with their walkers, but you were hell-bent. Short and to the point! The moment they sat down it was time to leave.

Two, three minutes and that was it.

So we heard about Mom's canasta game. The way she tipped the gal who did her hair. You were right, Rabbi. Even at a funeral, especially at a funeral--it's a sin to lie. The silence screamed and the empty space clamored. What went unsaid trilled like chords inside our hearts.

But I was never good enough. How the insults flew! Look at yourself! Mom used to say. Frazzled and frayed. Depressed and depreciated. Women age like cars. They look good for a few years. But then they get traded for younger models.

Thank you for the delicious rugelach platter. It was the hit of the shiva! My Aunt Sally loves rugelach. But she doesn't move too fast. Ninety plus years are stamped on her face like a passport. Bent over and arthritic, she didn't have a fighting chance. People rushed that rugelach like linebackers on the third down.

Herb Plinksky, as usual, took possession of the field. Finished off the chocolate and was working on the raspberry when Shirley Schwartz showed up. In one swift move, Shirley unpeeled a paper napkin, dropped in a dozen pastries, and plopped them in her purse. The home team went wild. The crowd roared. Score!

Thank you for the super-sized cheese tray. When in doubt, you can count on Costco! It's been three weeks since Mom's funeral, and we've barely made a dent. Of course I need cheese like I need bypass surgery. Me, my brother and my sisters. We all struggle with our weight.

Thank you for the contribution to The Bichon Rescue Society. But it's no wonder those dogs are abandoned. They're nasty animals. Fluffy little slippers with teeth.

Like everything else. You have to know them to hate them.

How Mom loved little Fritzy! Trimmed his nails. Puffed his fur. How she showered that dog with kisses. I love you, Fritzy! she'd say over and over. Who's Mommy's best best boy!

We'd watch with our mouths open, our lips moving with her lips, our hands pawing the air. How we hated that goddamned dog.

Thank you once more for taking care of Mother. I'm forwarding your last checks plus a little something extra. But you deserve more. Much much more. A Nobel Prize. Sainthood.

I suppose I should thank you, too. You clothed me. Put a roof over my head. Drove me to school.

And yet I sit at my computer, struggling. For I mourn not so much your loss as the loss of possibility. There was so much that could have been, that should have been, and now will never be.

Surely, says the Rabbi, there were good times, cheerful memories, moments where she kissed your brow and drew you tight.

Of course she loved you, say my co-workers and friends. Don't all mothers love their children? Mothers weep on Death Row, for Christ's sake! Even murderers are loved!

But no matter how deep I dig, I come up short. Yes, you gave me the gift of life. But did you have to wrap it in a bow of pain?

So I sit. Though my heart may skip a beat, it's beating. Though my wounds are raw, they'll heal. For despite you, I'm still here. And to spite you, I joke and jest. I'm battered but buoyant. Like Job but happy! Filled with regret but also relief.

For this I am grateful. With this, I say goodbye.

‹ "Folly" by Leslee Becker up "Small Fish" by Melissa Goode ›