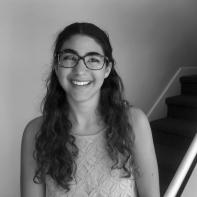 Emma DePanise has poems forthcoming or recently published in journals such as Potomac Review, Nimrod International Journal, and Little Patuxent Review. She won the 2018 Pablo Neruda Prize in Poetry. She currently studies creative writing at Salisbury University in Maryland.

America's last Blockbuster is not last
yet but I am writing this into history. Some rest

buried in benthos, leaving tracks for someone else
to hold as their lobes furrow. Occupy every ancient

ocean, shallow sea, speak of sluggishness
and spinosity. When the seas sink, curl up,

thought or the road in Oregon fewer and fewer cars
drive down. A year from now, meet me under the pool

ladder, the one with the cracked leg. Trace your way
to breath. Bob under blue-shadow-roof and exchange

secret glances like we're only pretending to be behind
bars or staring off the edge of an orange cliff. The white tree

frog lives here and spiders are dancing around the cocoon
our heads brush, but our voices are full of the echoes

of an empty bathtub. You are too tall for this ladder
and too strange here. Sink back under and skim the brick

ridges beneath the slimed plastic. Only one at a time
can we leave here. I am imagining you as faceless

as a trilobite, as faceless as yesterday or your words
on a screen, but can't shake the undo-redo

of your ponytail or the note pinned
on your back, painfully exact. It's growing

soggy now. I know I'll never know the making, the crease
in the paper's left corner or the smear

of the ink, but I'll know how it interacts
with water. Glide teneral across the seabed

into extinction. Leave the note behind, let me read
it in place of you.

In Praise of Nearsightedness

"in all those eyes their eyes no longer see”—John K. Samson

The phantom weight of a hat pressing down
a forehead in its absence. The urge to nudge

glasses up the bridge
of a naked nose. There are too many
rooms in this house for a lone pair

of lenses and one less
pair of eyes. Your father tells you
it would be easier

to find your glasses if you were wearing
them, he tells you you're just like your mother.
How some losses exist as ashes and others

as you left them on the bathroom
sink. How some losses give you back the shape
of her, the hat you took off years ago.

Staring at the Fruit I Threw on the Ground, I Think of You and August

The temperature you sent will silence the frogs
tonight. The ocean's gone
a little sour, and our breath, as clams

hidden in high tide exhale it, is bubbling
over. Today, the weeds can't stop
growing. You are nutsedge, knapweed

and thistle full. You want the wind to steal your bristles. The trees
are aiming high and wide. They are kicking

and unspoken, spring's flush. Maybe if I spin
fast enough, I'll see you
like a box jelly, 360 degrees and whole.

You know summer's stretched taut and thinning
when the blackbird is picking an apple
in the sand, raw and rotten, resting. The bitten

carves the unbitten, the single thing leaning
on too many things consumed and tossed
aside. You are not one of them.

‹ Two Poems by Emily Banks up A Poem by Erinn Batykefer ›