A Poem by Grant Clauser 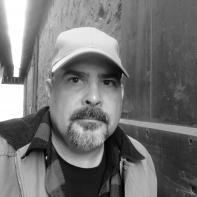 Grant Clauser is the author of four books, including Reckless Constellations (winner of the Cider Press Review Book Award) and The Magician's Handbook. His poems have appeared in The American Poetry Review, Cortland Review, Tar River Poetry and others. He works as an editor and also teaches at Rosemont College.

Muddy Dragon on the Road to Heaven

A 66 million year old fossil, part bird, part reptile found in China was named Tongtianlong limosus, which translates to Muddy dragon on the road to heaven

It took three days and dogs to find the body
tangled in the river's sympathy of algae
moving around her face like fingers,
but her ghost didn't feel that, or even the cold
though it was Fall, and the trees' gold leaves
passed over like what she remembered of butterflies.
No, not butterflies, but moth wings, the kind
drawn to the back porch light, the kind
her mother gathered each morning
after they yearned themselves to death
on incandescence, trying to get through
to something that for moths must be heaven,
so when the boyfriend finished choking her,
pushed her down the embankment
there was still something glowing inside the girl
and glows there still, a little bit of it everywhere
if you can see it, like the scientist who uncovered
a skeleton bound by ancient mud in China
and called it the saddest fossil in the world,
wrote in her notebook
that its head crest resembled ferns
and its tail an open fan, and as she mourned
for a history long carried off by winds
that never cease, we know
the creature was beautiful
because even as it died
it was so close to flying.

‹ A Poem by F. Daniel Rzicznek up Two Poems by Iyana Sky ›