"Essentials, The Hike" by Mary Sojourner 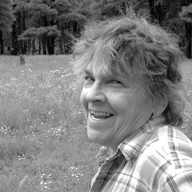 Mary Sojourner has written the novel Sisters of the Dream; short story collection, Delicate; essays Bonelight: Ruin and Grace in the New Southwest; memoir/essays Solace: Rituals of Loss and Desire. She is writing a book on women and compulsive gambling for Seal Press and is co-writing with a man who has befriended a wounded eagle. Her short stories and essays are in High Country News, Mountain Gazette, and many literary magazines. She is an NPR commentator and teaches writing throughout the West. She began her serious writing in 1985 at 45, after she raised her three kids as a divorced mom.

Fire. Colors. The Game. Monkey says the Hike is all there is. He says you don't need to hump much. He tells the kid just back from Iraq that there is no point in taking a GPS into the wilderness. “But how,” the kid says, “do you know where you are?” Monkey taps his chest. “You got a GPS,” he says, “how you gonna find what's in here?”

Three hikes. Love. Work. Death. For Love you need a Fire. For Work you need your Colors. For Death you need The Game. Fire to warm, to burn, to sear memory into a lost heart. Colors to tell your brothers who you are, to tell the world you know something about loyalty, you know something about Tribe. The Game gives an old guy a reason to live. Even on the sidelines, even if his quarterback shoulders and heaven-sent ass have withered to old guy jerky.

Fire: Why the sight of a man's long, beat-up, not young fingers can make my mouth go dry is beyond me. It's not like those hands are a mystery to me. I know them maybe better than my own; and they know every part of me, every square—no, curving—inch of me that can be reached. Plus those hands built this house, set the fireplace stones and delivered all three kids. Those hands planted the iris by the front stoop and have left bruises the exact purple of the iris on me. Time was when those hands could do just about anything. Now?

Now I watch Deacon shove the toaster oven, the portable CD player, a bag of Fritos and tonight's paper in a pillow-case. He yanks the modem cord out of the phone-jack and computer, coils it neatly and tucks it in his pocket.

“Maybe you won't talk to me,” he says, “maybe you will—but you sure as shit ain't yakking in one of those fucking chat-rooms tonight.”

“I'm going to the trailer,” he says, “Sweet fucking dreams.”

I hear the door close. Softly. I hear his steps going away. I think of him in the dinky travel trailer. No heat. December in Laramie. I shiver.

“What?” I pretend I am wiping down the sink

“Why'd you think he took the toaster oven, Mom. Jeeze. The guy is forty-eight years old.”

I imagine the fierce orange of the coils and Deacon's hands cupped in front of them. He'll see the light glowing through his flesh, he'll see his bones.

Work: My grampa wore that UMW t-shirt for a week, said he wasn't taking it off till Macintyre apologized. Macintyre figured there was nothing to be sorry for, nothing worth having that old mess in '59 thrown in his face. Grampa Gene said Macintyre was full of shit.

My grampa has the saltiest mouth you've ever heard on a Mormon, a Mormon bishop to boot. You would think he'd hate unions, after some of those run-ins with the Wobblies over in Goldfield way back when. But no, after my kid, Ricky, brought that t-shirt back from the big hoo-ha in Seattle in 2000, Grampa Gene was possessed to wear it.

Macintyre tried to take Grampa out for a few hands of Texas Hold'Em at the Sundowner, and a peace-making dinner—not the $6.99 Tourist tough sirloin special, but anything Gene wanted. The old man didn't even bother to call Macintyre back.

I tried to talk to him. “For crying out loud, Grampa, there hasn't been a working mine in Tonopah in years. What's got you going?”

“You'll never understand,” he says, “what we did down in those mines, it was like brothers. You'd get in there, bad air, worse light, dust thick as the end of the world, but you'd hit a vein, a pure vein and it was like love.”

He looks down at his shirt. It's going gray. He's spilled gravy down the front. “People don't know,” he says, “what it is to really need each other. Not even us elect.” For a second, he looks like he might cry.

“I'll call the old fart,” he says. “But, I'm gonna change this shirt. Mac's a gentile. He'll never get it anyhow.”

Death: Ray was just fine with it. Live out the last few months in his chair in the living-room. It was that last business with not being called to do the high school football announcing that tipped him off. If he was gonna be put on the shelf, he wasn't going to fight it. A man his age hadn't got much left but his pride, most specifically if he's taking those friggin' Loseitall blood pressure pills.

So, it's football season and this thing Ray has doesn't hurt, so he'd be content to just hunker down in front of the t.v. and wait this thing out. But, oh no, his daughter has to see him. “One more time,” he knows is going through her head and she lives all the way to hell and gone across the country in Pennsylvania, so Ray and Ellie get on this plane and head East.

It goes o.k. till Kansas. The chemo's holding back the leukemia bugs. Ellie's back on her pills so she's chipper. The plane, wouldn't you know, has some problem, so they put Ray and the wife on this little prop job with no toilet to take them to K.C. where they'll pick up a flight to Philly. Like Ray's Dad always said, 'You're laughing now, but you'll be crying later.”

Here's the problem. Ellie's oohing and ahing over something like the sun setting on the plains below them. She tells Ray the grass look like it's gold. That's all well and good, but the truth is Ray has to go to the bathroom and there's nowhere to go.

Thank God, it's not like right after the chemo, when Ray'd go right in the hospital bed, not quite like that, but, for Chrissakes, it's not fair. He didn't ask for any of this.

Not for lying in his own shit. Not for his body going out on him. Not for Ellie o.k. now, but who knows how she'll be tomorrow, a mess again, maybe, right when the two of them could be a team, pulling through this together. Not for every Fall Saturday morning, when Ray will drink his god-damn de-caf, take his Loseitall and know that down at the football field, somebody else will be climbing the bleachers to the announcer's box.

‹ "For Max" by LuElla Putnam up "Little B," by Matthew Brennan ›