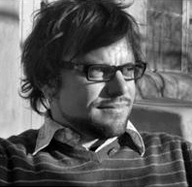 Josh Rathkamp’s first collection of poetry, Some Nights No Cars At All, was published by Ausable Press and is now distributed by Copper Canyon. His work has appeared in numerous literary journals and public art projects, including most recently American Poetry Review, Arts and Letters, Poet Lore, and Rattle.  He is the Director of the Creative Writing Program at Mesa Community College.

The Night the Tigers Beat the Yankees

All I saw was one member of Earth
Wind and Fire playing backup guitar
with a lead singer just good enough
to keep us there,
paying ten dollars a beer
while the slot machines and craps tables
rolled on without us.

If I wasn't almost broke,
wasn't still pissed at my poor job
playing cards, I would have been happy
as the man in a floral shirt
who handed me a Bud Light
and clinked the bottom of our bottles
when he said cheers.

I wanted to cheer, to go back
to Detroit in '84
where cars still got built
by American hands with American parts
by men in town
who proudly bought and drove them.

Even on Saturdays garage doors rose,
headlights turned the corner and vanished.

So my dad as the only dad left
steering the van to the game.
We'd pile in the back, drive downtown,
see the buildings that cars made,
the large steel towers before
the broken windows, the houses
before they were shut up by boards.

We'd pass Grand River and Woodward,
streets as forgettable as the reason for their names,
how men rode north
into this great gray state
and sent logs down the rivers, so many
you could walk straight across without falling through.

In Response to the Psychic's Conversation with my Wife

There are worse things to put under a pillow
than an oiled baseball mitt.
Say regret, say scissors, say an arm and a hand
that won't reach across to where you lie
waiting for a finger to trace with a finger.
If nothing else there must be fingers
on hands fumbling through shirtsleeves,
fingers on hands searching for a hole
that can deliver them from darkness.
There are worse things to be than alone.
Sometimes the nightlights burn out
and we can't find the bathroom without knocking
our shins, we can't find our daughter
under the sheets, but don't worry
she's there but where her head should be
it's feet.  Sometimes in bed we get twisted,
we wake tired from sleep.  What I mean is
it gets tough before it gets better.
Let's pack our bags
for New York, maybe Toronto,
some town with a chill where buildings
grow up instead of stretch out
so impossibly like your sister's Downward Dog.
Sometimes the lights go out, the air
conditioner trembles, but the men
behind our house in hard hats
always turn it back on.
It's the time in the middle, the time between
when everything's quiet, when noises
we didn't even notice die down,
let us be. We think it's the first time
in years we can hear
ourselves breathing. We think even if everything turns
sour, if sweat dries in white rings
under the arms of your favorite tank top,
if the easy inflate pool, which wasn't easy at all,
stays gunked-up and green, it wouldn't be all bad,
a strawberry's still a strawberry
even if it rots in the bottom bin of the fridge.

‹ Three poems by Joann Gardner up "Bajada" by Julie Hensley ›