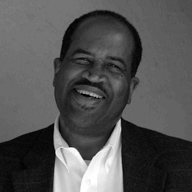 In the winter of 1984-85, big changes began for Afaa Michael Weaver, whose birth name is Michael S. Weaver. He had been working in factories and writing since 1970. In January, he received an NEA fellowship in poetry. He was also accepted into Brown's writing program that spring. In July his first book, Water Song, was published. He became an academic. At Rutgers he received tenure in 1995, and he has taught at Simmons since 1998, the year he received a Pew fellowship in poetry. His tenth and newest book of poetry is The Plum Flower Dance, published by the University of Pittsburgh Press. Afaa lives in Somerville, Massachusetts.

It's cold and tin that put me back there,
chill places where things are stored, a day
in some autumn, a supermarket where
the colors and smells and even feel of the floor
add up to some convergence in the spirit,
and I hear you, blessed uncle, saying it's time
to play the game again, or even alone
in a park somewhere, open to the whim of chance
that is what our minds are, as our minds
are all of what we are, and here you are
again, inside me, telling me it's time to play
the game again, as if I am not over fifty now,
and do not know that I was hardly the speck
of what this arthritis has come to be, how
high this blood of mine with its pressure
so that all the world's relaxation leaves me
still with medicine I swallow and come
back to the cold and tin of the pantry—you
singing your hypnosis song of how I have
to play this game, how it is time again
to take things I do not want, and yet I know
enough to know it is not candy, and that it could
choke me if I say bad things about it, make
the dragon inside it rise on a tail of fire and
then spit at me again, the spit the awful
that makes me feel unclean until I take
the dragon like some Perseus, count its nine
heads, the nine heads someone gave to you,
and cut them, one by one, until they are
roses, blushing pink, tender to the touch,
and I come back to some faith that innocence
has a more sacred seduction that is one heart
giving itself to another heart, confessions
in the way of chanting saints, things too big
for a little boy needing a hand to knock
you down, set a holy fire in the pantry,
burn it, send it the way of the unclean.

It was a dirty pool sometimes and such a shame
the public an unfit place to set shit floating,
bobbing on the waves of the pool, some smear
on the mirror made by the blank color of water
in summertime, while we were having picnics,
hot dogs and their rolls on the grill, waiting for us
to come back from swimming, a throng of boys
smelling like the dried chlorine of the city.

You would swim and suddenly come with this
muck harvest that made you sick, or if you were
the more mischievous of us chase the rest with it,
throw it at us, threaten to put it in the girls' hair
while no one seemed to want to know who did it,
who was a rogue and unclean swimmer in here
with everyone else fresh from a bath at home
with soap and some thoughts of sweetness.

If it were not enough to have the shit to swim
we had the piss, too, the liquid like a melted snake
that let on only with its smell and then we could not
find it, too late, too late because it was all over
the child in us, the child we had walled up inside
the wound of having to be in the public this way
with eliminations and the stink of these strangers
who did not know what goes where sometimes.

The stranger the strange you, cousin, the hero
who beat back the bullies at the pool, who could
lift weights like they were weeping willow branches,
willow, weep for me, willow, weep for all of us
trying these waters with you, strange cousin
who could not help but put things where they did not
belong, and when you died, I put my hurt down
in the ground with you, with my love, so strange.

It's all the news can say today, he's bound
to death by injection, supine on the gurney,
wondering things people wonder when they
are punished for having wrecked a life
or taken it, this niece of his he used like a toy,
murdering her soul one expert said, the damage
too big to calculate, too big for him to pay
in ways other than by dying, the message
going out to all predators, sick eyes on children
sick lips pursing over bodies not yet grown,
sick minds that cogitate in dreams of stealing
the innocence and leaving empty sores of pain
where bright eyes should be, where laughter
should bubble up like endless fountains-
so I think of you, blessed uncle, of you
the king I held up high on mantles where
the memories could not stain you, as memories
are children who grow one day to stand
on tippytoes with their Howdy Doody fingers
and touch the mantle, tip it down with power
from some hero buried in them until the mantle
decides to give so there you are, all the beast
of you, so eligible for death on a gurney,
and when I ask who will press the buttons,
unleash the poison through the tubes into
your veins while your eyes roll backward
in your head, I know it cannot be me,
I cannot kill the body that has known me,
I cannot be bound even more to its soul,
its eyes rolling back, showing eyes
that loved me even through the envy.

If you tell, the stars will turn against you,
you will have not night but emptiness.

If you tell, you will live in an old house
in the desert all alone with cactus for friends.

If you tell, people will hide their children
from the monster others say your kind are.

If you tell, the police will add you to the list
of people who might have killed the albatross.

If you tell, you will walk in a hollow room
full of the sound of liar, liar, pants on fire.

If you tell, poets will call it marketing,
a ploy to get ahead in the game.

If you tell, women will think you are trying
to steal a place that is not yours.

If you tell, you will become a stinky thing
no aromatherapy will ever make sweet.

If you tell, all the therapists you ever saw
will claim you in reports to some conference.

If you tell, you will see the wounded everywhere,
shuffling legions, the murdered souls of children

under angels' wings beating a prayer in a place
with no night, no day, no palladium of lies.

‹ "The Menu" by Adrian C. Louis up Two poems by Barbara Hamby ›