"The Menu" by Adrian C. Louis 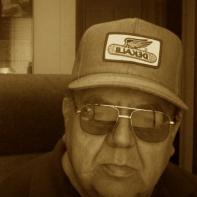 Adrian C. Louis grew up in Nevada and is an enrolled member of the Lovelock Paiute Tribe. From 1984-97, Louis taught at Oglala Lakota College on the Pine Ridge Reservation. He recently retired as Professor of English at Southwest Minnesota State.  Pleiades Press published his latest poems, Random Exorcisms, in 2016.

Iced tea & ice cream.
Ham chunks & bacon bits.
We are a mundane people
living upon mundane plains.
We dine upon the mundane
& forget to pray for our
sad-ass, mundane selves.

Nevertheless, last year there
were 2.75 million cattle lurking
upon South Dakota dirt & they
give this poor slob a slab that
he has to slather with A-1.

It is not yet tomato season,
cherry or otherwise, but
cherry tomatoes & death?
A combo beyond poetry &
Id bet my left nut that his
bleu cheese dressing came
from a plastic squeeze bottle.
Everything else seems duly
clogged with bad cholesterol,
but all in all, the menu makes
me very, very hungry for
the blood of the dead &
if it were my last meal
I suppose I would relish it.

Colleen, my love,
I do not recall what I ate
on the day of our death.

I would like to think that
what I ate the day you died
was cold, greasy & perfunctory,
but I really cannot remember.
I suppose our histories matter
only to us for a short while
& then they matter to no one.

Last week I got a honeydew
melon that was sour inside.
I threw the two halves into
the backyard for the birds.
Between peck & shrivel, all
hints of green soon vanished.
Thin, brown skins left with
a broom wind that brought
strong thunder & weak rain.
When it thundered last night,
it sounded exactly like huge,
human farts.  Exactly
A result of global warming?
I may be close to the edge.

Driving to Starbucks today,
I passed an old duo in a Buick.
Woman was yapping at man
just like a Chihuahua would &
I know man was thinking of
A-1 on his steak reward for
tolerating the years of peck
& shrivel, the strong thunder
of her voice, the weak
rain of his aging groin.

Menu: One year memorial.
Slim Buttes, SD. August 12, 2007.
I'm early & lay claim to a plastic
chair close to the grill & prairie wind
wind whips charcoal smoke directly
into my thrashing brain & the scene
turns slow & I don't know why
your family always chars burgers
black & within a half hour Im so
stoned on briquettes & Pepsi that
my loving fear of ghosts dissipates.
When I leave at dusk, I move
slowly, dryly like a walking
piece of withered jerky.