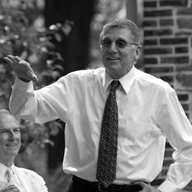 David Hamilton is the author of Deep River: A Memoir of a Missouri Farm, Ossabaw, a volume of poems, and numerous uncollected poems and essays. He is also one of several editors of a well known college reader Fields of Reading: Motives for Writing, soon in its 9th edition. For most of his career at the University of Iowa, he has edited The Iowa Review. He teaches literature and writing and has directed Iowa's MFA program in literary nonfiction.

All I know of an iceberg
Is its secret significance,

Shaded. Coming to you
I feel like an iceberg inverted,

A flail flicking the grain,
A stone tip-toeing the stream,

Like trillium's bloody lace,
Fluffed off the forest floor.

The childhood dream I dreamt most often
almost to suffocation
rolled up on me oh
so long ago
leaning slow-
ly over
like a bosomy grandmother
but softer more
like an enor-
mous marshmallow or
a university classroom and oooff-
fice building as a Claes Olden-
burg soft sculpture or
a giant's shopping bag which she swings lower
and lower
then plops down encroa-
chingly as if I were
a dog leashed to a meter outside the gro-
cery store
but undifferentiated by limb or
feature
more like a grape accidentally dropped then
plopped by her vagabond bag upon.

Surprised in our hallways
Where I'd lingered alone,
I kept on whistling
As she scurried downstairs
Ahead of my tune
Cast out over
The deepening pool
Of a late afternoon.
Then just out of doors,
I glanced back at her window
And caught her whistling.

In a little lumber town up in Oregon,
the county agent rounded up a bunch
of us and explained we could go to college.
We cooked fudge and made money and went up there
with her. George was living by himself
near his sister, down in Pasadena.
And he met a young man who was preparing to become
an entomologist. So George said,
“I'll go with you.” And they went up
to Corvallis. I went up to Corvallis.

There was this teacher from Berkeley, who loved poetry,
we were sitting. . .  George sitting right
on the front row. He introduced us to poetry
of this moment. It was a Conrad Aiken anthology.
His eyes, he had beautiful, big blue eyes.
Otherwise, he was a very ugly man.
But he was young and just out of Berkeley.
He'd gone up there on his first job. He was just
electric about poetry, and he got us all
writing poetry and asked us to come to his house.

Oh my goodness, at the first assembly
the speaker explained fascism. He had observed
Mussolini's march on Rome. It was electrifying.
To go to college . . .  And next was Sandburg with his guitar
singing, “The fog came on little cat feet.”
These are songs my mother sang.  Oh
my goodness, what a vision of America!