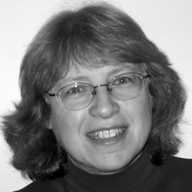 A native of Maine, Joann Gardner lives in Tallahassee, where she is an Associate Professor of English at The Florida State University. She is the Director of Runaway with Words, a poetry workshop for runaway and homeless youths, and an Associate Director of Anhinga Press, a publisher of fine poetry. Her poems have appeared in such journals as Seneca Review, Small Press Magazine, Crazyhorse, Writers Forum, Louisiana Literature and Tampa Review. In 2005, she won the Weldon Kees Award for her chapbook La Florida, which was subsequently published by Backwaters Press.

An explosion of sound as searchlights pan the stage.
A man in white, big hair slicked, saunters out to introduce:
The Generals of Soul. A band in fuchsia zoot suits plays
electric, wild. Then, three swaying backup singers in gowns.
Lights left. “Ladies and Gentlemen, The Bittersweets.”
We applaud. Two of an original three go-go dancers
work their legs up and down, but the man we've all been
waiting for, the Amazing Mr. Funk, where is he? We crane
our necks, search the stage, breathless wait, but do not see.
Then, with Supreme Dignity, the Godfather of Soul struts out,
fresh from his unwanted vacation—his unfortunate
incarceration—hair coifed, unmovable, unmoved.

In green taffeta and gold glitter, black pointy boots shuffling,
he gives us what we want, a familiar “Turn It Loose.”
Off comes the cape and two sets of drums, two trumpets,
two saxes, two guitars, one piano, three back-up singers,
two go-go girls, one announcer and the one and only
James Brown get down.

He throws mike, dips, catches it, sweats, “Like a Sex Machine.”
“Mama, Mama, Mama,” raw rock and we remember.
James Brown from Georgia picking it up where he left off.
“I was born dead with a caul over my face. They revived me,
and I started singing, “Please, Please, Please.” My mother
quit school in the fourth grade, my father in the second.
I made it to the seventh.” (“Papa Got a Brand New Bag.”)
“Hey, let's have a hand for John Paul II. I'm a Baptist myself.
Do you believe?” “And let's have thirty seconds of silence,
please, for King Assad of Syria, who wanted peace—and for
Menachim Begin and Martin Luther King, and John F. Kennedy,
and Robert Kennedy.” “We got to stop the violence. It makes
me wanna scream.”

More dancing, swinging, rock, feet pounding. And then some
sweet stuff with the girls: they dance together like two spoons
or waltz in a circle smiling. He asks his lead guitar man,
“You ever seen B.B. King?” And the answer comes back
as music, yes. “You ever hear him play Lucile?” Yes, Lucile,
straining at the chords. “What you say your guitar was named—
Matilda? Well, play Matilda like you'd play her up against
B.B. King.” Down on his knees, making his guitar plead, sing.
“It's a man's world,” and the men in the audience cheer.
“It's a man's world, but it wouldn't mean nothin, no, it wouldn't
mean nothin, without a woman or a girl.”

The phenomenal James steps back, outa gas, staggers a few feet,
stage front, slumps, weeping. Announcer comes, puts cape on
shoulders. He gets up, throws it off, returns to the mike and screams,
“It wouldn't mean nothin' without a woman or a girl.”

The process is repeated, death, renewal, surge, and the music,
yes, the music reaching, deep into this star-strewn evening:
“Ladies and gentlemen, James Brown,

I keep thinking
a phone will ring, but, then, I remember,
I have no phone, and if anyone were calling,
I could not hear them.
Last night, the moth
returned, throwing its fat body against
the glass. Tonight, behind the shade, it flaps
—flutter and thump—like a fish.
The sea
is making. I hear the periodic fury of assault.
No bell though, which means: this is just
the usual sea, dragging me from my dreams.

One man drowned, two men swelling
in the sea, the rise and fall, the casual
hostility. This place contains multitudes. Do
they sleep in this raw weather?
Hear the rain
on the roof, the sea making; feel the damp
rise.

The moth spreads
its wings against the glass, peaceful at last;
my body yearns for sleep.

I dream of my
father in the frame of a boy,  freckle-faced,
hair on end, leaning in to discover who this
might be. Startled to encounter
the familiar
across the divide
of time. Miranda says,
“Bend your arm like this,” and inserts
a needle there near the elbow. A flash
of energy rushes down through  my arm
and out.
“You are balanced. You have
energy. You just need more.”

And now,
human fatigue returns, a certain urge
for senselessness telling me:
fold body
beneath blankets and sleep. And I almost
fall for it, except
a bird begins to chirr,
as if it had seen something unusual,
as if something important were about
to happen.
Hamlet's ghost fades. My
ghosts sleep on the hill, there where
the wind blows and, in a chorus of
breathlessness,  doze, chilling themselves.

This is a place
where consciousness rests—here, now,
brimming with possibility. Energy
gravitates, does not marvel, but accepts.

Two moons appear by the side of the bed.
Wordless, solemn, but the message is clear:
GET UP! HURRY! THE SUN IS SHINING!

They examine a third moon, its features locked
in sleep. “What is sleep?” they wonder, unaware
of the distinction between experience and dreams.

They focus, then, on breathing, the heavy-lidded
eyes, the willing suspension of animation,
the inexplicable trust. And so the day starts.

Eyes open, body begins to stir, called back by
spirits who know nothing of the future or the past—
new to sensation, turning on creation's wheel.

The pileated woodpecker, its red cap and bandit eyes,
rides up and down the trunk of a tree, listening for grubs.

Rain falls noiselessly, touching rings against the surface
of the pond, where lately a muddy alligator, its back

like a Michelin retread, lounged, just outside the fence
of the playground. There's a little boy; frustrated

by recent reversals of power, he must wait to discover
if all this discipline makes sense. I carry him in my arms

down the dirt road on Pinckney Island, sheltering
his head from the sun. He holds on tight, clutching

my body as if  I were a tree, and he, a land-locked
barnacle-razor-eyed, hollow-boned, intense.

A colony of fiddler crabs hustles in the shallows.
The green tide is sucked up by the marsh. A grass snake

drapes itself over a low-lying palmetto. He wants to see
that snake again, the pleasure of its yellow eye.