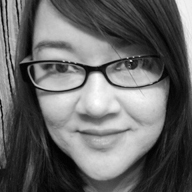 Jenny Yang Cropp's poems have appeared or are forthcoming in Eclipse, Poetry Southeast, Blue Earth Review, and elsewhere. She received her MFA in creative writing from Minnesota State University-Mankato and will begin the University of South Dakota's PhD program in English this fall.

Her grandmother thinks she talks too much, this twelve-year-old
who sits with me after church at the kid's table because I'm like her,
not from here, just visiting, and she draws a map to show me
where she's from, her baby fat fingers turning pink at the creases,
pen tip tearing through layers of napkin. That's her house

by the ketchup stain, and two doors down, an aunt and uncle,
a few cousins there and more in a trailer nearby, but they play
with her brothers mostly. She works in her dad's store selling bait
after school, doesn't mind touching worms or minnows,
will even bait her own hook. She points a French fry at the store,

less than a mile from home, says two girls cousins her own age
live right behind it, and sometimes they go fishing at the lake,
or they used to but they can't anymore, not alone and not just girls.
I remember what it's like to be a child, a girl child, seen
but not heard, so I smile when she asks if I like fishing and if

I've been to that lake, seen the fog that rises up off the surface
at sunset after a long, hot day, but she's not looking at me.
She's watching her grandmother who thinks a smart girl ought to know
when to leave well enough alone, but the woman's got a mouthful
of someone's potluck casserole and can't hear when she chews,

so the girl shoves the sleeves of her big red sweatshirt up, the one
she changed into as soon as the service was over, and leans in
to tell me the thing she's not supposed to talk about.
Last summer, she says, she went to the lake every morning by herself,
to get away from her brothers, and that's how she found the truck,

because it was there one day, which didn't mean anything,
but it was still there the next morning and the next, and the door
on the driver's side was always open, no one in there, and the tires sank
a little each day into the sand, and it was two boys, sure,
cousins on her dad's side, who found the body in the trees,

but they're still allowed to go out there, to the place
she marks for me on the map, three lines and a leaf next to a swirl
of blue ink and a sprinkle of salt next to the water's edge
where her brothers found the knife, at least
that's how they tell it, but she was the one who saw the blood.

When she asks me why I'm leaving,
I'll tell her about Korea, those five weeks

away, a strange seduction in a noribang,
people singing, slurry of music, voices

sliding beneath closed doors,
and the man in black-framed glasses,

how I didn't know the word for married
and how the streets were bloated with rain.

I'll tell her about the taxi driver who cheated
me, how much I was willing

to pay, how I spent the rest of my trip
staring out my window, watching puddles

grow into mirrors for the shifting sun.
My last night, leaning over the sill,

I lit matches and dropped them,
counted the seconds it took

for each flame to fizzle out, not one
strong enough to light a path to the ground.

Up is like down when you die, east and west
disappear, sadness merges with carnations

in full red bloom, weeping petals
that pile themselves in the sky.
I've been close enough

to remember laughter echoing
through a hollow body, pushing skin

until it stretched to bursting, though perhaps
those few seconds when I was done,
that laughter was all in my head.

Sometimes it's just a dream where I'm vapor
expanding in panic, drifting out and out

until I wake up heavy and solid.
Death should be harder to remove,
but consciousness came

even when I tried to lose it. It was always
a spasm of regret and then

a sudden intake of breath, electric
shock of relief for the flesh. But it will end
differently one time, and I'll learn by accident

the secret to keeping death, its eternity of starlight
pressing shut my eyelids,

and I'll stare into the vein-red distance.