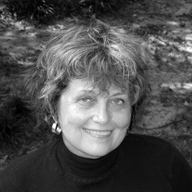 Barbara Hamby's fourth book of poems, All-Night Lingo Tango (2009), was published by the University of Pittsburgh Press. Her third book of poems, Babel, was chosen by Stephen Dunn to win the 2003 Associated Writing Programs Donald Hall Prize for Poetry and was also published by Pittsburgh. Hamby received a fellowship in Poetry from the National Endowment for the Arts in 1996. She has also received three fellowships from the Florida Arts Council. Her work has appeared in many national publications. She is Writer-in-Residence in the Creative Writing Program at Florida State University in Tallahassee, Florida.

When moviegoers die, instead of paradise they go to Paris,
for where else can you find 200 screens
showing nearly every film you’d want to see, not to mention movies
like Captain Blood, in which bad boy Errol Flynn
buckles his swash across the seven seas, and though I’m not dead,
I may be in heaven, walking down the rue St. Antoine,
making lists of my favorite movies, number one being Cocteau’s
Beauty and the Beast, but I’m with Garbo at the end:
“Where is my beast? Give me my beast.” Oh, the beasts have it
on the silver screen—Ivan the Terrible, M, Nosferatu,
The Mummy—all misshapen, murderous monsters,
because no matter how beautiful we are, inside we know
ourselves to be blood-sucking vampires, zombies, freaks cobbled
together with spare parts from the graveyard,
and God some kind of Dr. Frankenstein or megalomaniacal director,
part nice-guy Frank Capra, yes, but the other part
Otto Preminger, bald, with Nazi tics, because the world
is so beautiful and hideous at the same time,
an identical Technicolor sky over us all, and the stars, who came up
with that concept: the distance, the light,
the paparazzi flash? And the dialogue, which is sometimes snappy
or très poétique, as if written by Shakespeare himself,
then at other times by the most guttural Neanderthal on the planet,
grubbing his way across the landscape, noticing the sky
only when it becomes his enemy or friend, dark with birds,
not Hitchcock’s, but dinner, throwing rocks into the sky,
most of them missing their target, a few bouncing off his prognathous jaw,
like Kubrick with his cavemen and spacemen existing
on the same continuum, a Möbius strip to be sure but with Strauss,
both Richard and Johann, in the background, and though it’s winter
there’s a waltz in the air as I walk through the Place des Vosges,
and I’m still trying to come up with number two,
maybe 400 Blows or Breathless, because here I am, after all in Paris
still expecting to see Belmondo and Seberg racing
down the street, cops after them, bullets flying, and maybe I am
in heaven, but I’ll always be waiting for Godard.

The Mockingbird on the Buddha

The mockingbird on the Buddha says, Where’s my seed,
you Jezebel, where’s the sunshine in my blue sky,
where’s the Hittite princess, Pharaoh’s temple, where’s the rain
for the misery I love so much? The mockingbird
on the Buddha scolds the tree for trying to stay straight
in the hurricane of words blowing out of the cold north,
wind like screams, night like brandy on the dark cut of my heart.
The mockingbird on the Buddha, music is his life,
he hears the tunes of the universe, cacophony of calypso,
hacking cough in the black lung of desire; he’s ruddy
with lust, that sweet stepping puffed-up old grey bird o’ mine.
The mockingbird on the Buddha says, Eat up
while the night is young. Have some peach cobbler, girl,
have some fried oysters, have some Pouligny
Montrachet, ma chère, for the night is coming, and you need meat
on your bones to ride that wild horse. The mockingbird
on the Buddha says, It’s time for a change, little missy. You’ve
been in charge too long. It’s time for the bird
to take over, because he stays up late, knows what night can be,
past 12, past two, when trouble’s dark and beautiful.
You never knew what hit you, and that’s the best feeling
in the whole wide world. The mockingbird
on the Buddha makes his nest inside my brain: he looks good
in grey, gets fat on thought, he’s my enemy,
my Einstein, my ever-loving monkey boy, every monkey thought
I blame on him, every night so sweet my body breaks
apart like a Spanish galleon raining gold on the ocean floor.