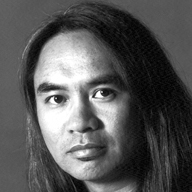 Eugene Gloria is the author of two books of poems Hoodlum Birds (Penguin, 2006) and Drivers at the Short-Time Motel (Penguin, 2000), which was selected for the 1999 National Poetry Series and the 2001 Asian American Literary Award. His other awards include a Pushcart Prize and recent poems have appeared or are forthcoming in the Indiana Review, Crab Orchard Review, Louisville Review, The Normal School, and The New Republic. He teaches creative writing and literature at DePauw University and lives in Greencastle, Indiana.

Some say I practice the dark sutras.
Some say I wear a mask.
So seeing the apricot trees again—

bare branches over green radishes
on the vendor's table made me happy.
Here things stand for desolation.

standard faces,” things you see and not see.
Let me rehearse the words I know.
Apricot and ruin, I get the two mixed up.

Safety and ruin sound the same.
Arasu, ruin; apricot, anzu.
There is safety in numbers, and one

among many bears an object empty
as the vacancy of invaded provinces.
Even when coming undone, Roethke
knew well enough to sing in sutured lines.

Today is November the twentieth-sixth, 1967

a cloud burst and then a flood followed killing 457 people in Lisbon. No one among us here knew about the flood, the portent, the number dead. It happened on a Sunday (my birthday!) when no one made a fuss. There was a Mass attended and a short drive somewhere to buy a lemon cake. No one bothered getting the tiny candles for the cake. There was no news report of the flood in Lisbon. The Prime Minister of Portugal ordered a news blackout for no one must know about them, their shacks unhinged and sent by the water, exposing their unseemly end. What clings, what renders bigness rising from the sea; the small irretrievable nothings not mine, though mine to grab. The hallway apparitions, the demonic face peering from the gated house, my distant cousins being swept by a swelling street, and Salazar, the Prime Minister who hailed from the province of Amnesia is calling for more pastéis de nata, more pastéis de Belem for all his lovely guests. Portugal's tourist industry was at an all-time high.

Hirsoshige must have understood proportion
in his print “Evening Squall at Ohashi”:
the smallness of men under a prodigious storm.

Night of folding umbrellas and a harvest
of shadows, I set out on foot
and ducked into the covered shopping arcade

on Teramachi and took my dinner
there at my favorite tonkatsu restaurant.
Rain kept pouring and singing in the gutters.

I remembered taking a shower
with my two big sisters when they were still
part boy, hairless below with swoosh lines,

no breasts to speak of. I was but a twig
enclosed by the tan barks of madrones.
My young sisters towering over me,

and tonight I am wholly honored
by this intimate memory.
On BBC World I watched a news item

for being with a man rumored to be her lover.
In Kurosawa's Roshomon, the thief
scoffs at the priest, “If it's a sermon,

I'd rather listen to the rain.”
What punishment would you heap
upon my sisters who harbor

such an intimacy? It is raining
in the ancient city, so much rain!
I am small in the rain.

Notes from My Lovely Assistant

He was a jewel of selflessness before there was a moon. That's how I thought of him when I saw his moves. Such coolness, too, in his movie-speak when he jostles with the clerks at Blockbuster! My friends congratulate me for finding such a catch. “Oh, he's a smooth one!” they'd say to me. My BF recalls the wide river of his past and reduces it to a street when he was five. “Something bright is shining there,” is a seven-syllable line from his “haiku in progress.” When he comes home, he'll tell me something important that I didn't know before.

There is always control. The knife comes fast. If I were philosophic, I'd say that it's an ability to see things plainly. His throwing hand is precise, severe in its effectiveness, almost cruel. These days, our gigs fly by. How to slow things down is what I can't ask him. What can he do to make our job feel more than what it is? What can a knife thrower say that would make me less fictive? The knife's destiny is not tied to mine. I smile to a gasping audience, my image is exact and without fanfare.

What slips away might be the very thing I need to keep. I should have been a tree, spellbound, a discontented woman clinging to the earth. I am a target girl, a hole in the tree for you to pucker up, or whisper. Gods don't ask for my name. I'm just given one and told to say yes and yes and sometimes no.