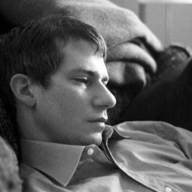 Philip Jenks was born in North Carolina and grew up in Morgantown, West Virginia. He got his BA from Reed College, MA in Creative Writing from Boston University, and doctorate from University of Kentucky in Political Science. He has studied under Susan Bordo, Fish, Pinsky, and Walcott. He sings and plays percussion with The Howling Hex, contributing to their upcoming album XI, being released August 28th on Drag City. He teaches English at University of Illinois at Chicago and Political Science at Lewis University. Flood Editions published his first volume of poems in 2002, On the Cave You Live In and a second volume of poems, My First Painting will be The Accuser was released on Zephyr Press (2005).

Witness the difference between kissing
& asphyxiation, between diagnosis & prognosis.
If you find it, you can cut us in—

we'll play at the hedges & wait for you.
Or sit inside writing on a slightly steamed window,
the schism between cram & quell, steel

& bone.  The loud undulating plunge
of one body into two. Multiplier
of streetlights. Inside, housewives wonder

why a girl's writhing in the backseat of a Buick
that doesn't belong on their street.
Further inside, housewives do not wonder

at what they know men do, then refuse to move
from the window as a cardinal explodes, leaving in its wake
a litter of crushed balloons that once held

some hopeful breath. Blood-spackled ecstasies
or choked up prosaic partner.  A mask not a man,
a blue uniform that moves its emptiness towards happiness,

only to smash it with its own insistence,
sickening regiment & forked blue brute force,
you absorb fear until it fleshes you out, stuck

on the buzz of butchery. Your eyes
winter trees stark & amazing. Flashed out
by such nothings whose lives were built expressly

for your kind of surgery, where a blade
becomes horizon & a dozen dead husbands
hang in your half forgotten dream.

Farmyard special of the week: hillbilly headless
stuffed with your sick absence, you slit a sliver
in my jumpsuit that says sweet tea. You artifice me
into defaced goat; you sell me at your little
Wisconsin grocery adorned with a sign: Eat the wicked
& leave the mild-mannered to rest in mother's
tupperware garden. Skulk around with razor or cleave.

How strange the smell of your own reflection,
your face a cipher with sliding doors,
peer-afflicted sunspot or sunburnt bloodspot
on your pants. You once played operation, but lost
to the buzz of your multiple errors, you angered
into adulthood & pulled a little bone from an innocent chin.

Weird smile glittering over the horizon
of a lock-jawed mouth, gambling to be under
sane sheets of an organized surprise, you let investigators
lead you from the guidance of Gray's Anatomy
in your cellar to a rubber cell carved from the hellish
real of the banal being of your truth.

Invite us to breakfast…where you serve us to ourselves
& even in incarcerated dreams we are dancing, dead.
We've finally made some plan of escape, etched in dirt
or brain - consumed in your body & what is called mind,
where all is ripe as you re-write your mother's recipes
adding nothing & deleting everything, leaving
this illness not unwritten in the margin.

We got you all wrong. You weren't the redhot rendezvous
or the bloody handprint, but the ambulance, white
in black rain, pressed against algid armors
of your electric flight.

You weren't declamation just a voice-over of a widow
speaking into a dictaphone, taking notes
for a dream from scratched heads
& penciled-in threat.

Zoom to an arachnid-savvy femme fatale undressing
in a Packard, all campfire hot with her detective,
inventing the opposite
of ambiance.

Sirens hail wet against you & where you might
have been, thrust of an echo, as you offer
a collection plate for alienation
& machine guns.

Something discrete falls to the street at your periphery,
as if to suggest an inclusion or a confession
behind Venetian blinds. What's left
in your oneiric rain

is not gunfire but the glint of a gold anklet, shot of the possible
held behind its purchase & gift. The clasp's been damaged
by an insistence on a link that doesn't exist; as
a row of snow globes glistening unveil

How long have you been standing in the doorway
holding a fretsaw & dreaming of indentations?

You said the body was furniture, was fixture
but we couldn't fix it. Sometimes, you the only one
talking, though neither of us narrate the way we used to;

we can't locate the colloquial phrase
to measure your presence is is-not inside of us.

You move from oven to lovers, saving the date,
alive but not enunciating essence, you piledrive
a girl into ether. Ensnare a spouse in argument—

one takes car, gas, garage, & cats too.
If the sound of you is snow & the color of you

is yet to be determined, then your syntax
is parasitic gap. All talk is syllable as dynamited
sparse demarcated. Your face breaking into nickels

& stars, past tense next to an overdue library book.
Spread of the eye glassing back at the fortunate friend

who found you, lived to tell a tale of half endings,
witness to the limits of shadows which hide
in the nicked & stained couch where once we both lay.