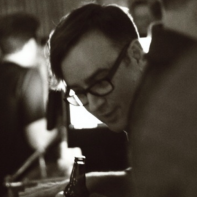 Robert Krut is the author of three books: The Now Dark Sky Setting Us All on Fire (Codhill/SUNY Press, 2019), which received the Codhill Poetry Award, This is the Ocean (Bona Fide Books, 2013), and The Spider Sermons (BlazeVox, 2009).  He teaches at the University of California, Santa Barbara, and lives in Los Angeles.

A kid in Wyoming tugs on a wheat stalk,
and in China, a shrub shoots into the ground.

I'm sitting on a rock in the woods out of the city,
the sound of crowds with their arms in the air

hanging among the distant skyscrapers
like a low-lying cloud, or swarm of gnats.

Beneath, deep underground, is the stalagmite
that started the world—

in its base, a beating heart with tattoos
of every human face.

Ahead, the distance lights itself with noise.
We are all connected, and it is sad as all hell.

A milk-white salamander crawls out
from a crack in the ground, along with escaping fog-

the breath of the center of the Earth
tugging my ankles, coating my face.

These Tracks Leave Nothing but Ashes

ringing in my ears starts as ringing,
ends as steel guitar, slow,
slow, into the hiss of saws,
hum of neon strip mall signs at dusk,
into the pulse of answering machine tones,
repeating,

repeating, until sound tucks itself
behind a coyote's ear, who shuffles
off behind a lift in land, shades of black—

Got a heart-backed card never played,
your number on back
from the first night of the world—

before the matchstick tracks became
moving bonfire, and nothing is how it was
before you closed your eyes,
stepping on the train.

Shouting Out the Catacomb

A spiral wave of light burrowing in the bowl-face
of the chalice, the secrets of a holy grail whispered

then shouted from a catacomb, the muscle skin
turn of your forearms, the steady lift, lift, lighter—

skeletons with trinkets hanging from their ribcages,
the lantern light of your candle breath post,

the dusty pathway to a stairwell leading into dirt mounts,
foreign tongue symbols appearing in your fingertips,

crucifix in a star in a heart raised from your palms,
naive stigmata, incantation of innocence,

hymn of the homeliest, an iron sword birthed
from a broken leg that you will pull from your own body,

raise overhead and praise I will fight here
for what I do not know.

There's a spider in my palm
and if I'm still
he's calm.

There's a fire in the hills
and a black balloon of smoke.
There's a swollen noose of a flame
and the brush the ashes took.

There's a spider in my palm
he'll stay sleeping
till the dawn.

There's a sheet of burning ice
and it's moving up the coast.
Leaving ghosts in sight
looking just like tainted frost.

There's a spider in my palm
eight legs
of curling flame.

There's a pickup truck behind
and it's packed with bark and wood.
There's a scar along your neck
in the shape of the moon.

There's a spider in my palm
if I'm still
he's calm.