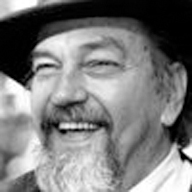 Dick Allen's new collection is Present Vanishing: Poems (Sarabande Books, October, 2008). Sarabande also published his The Day Before: Poems and Ode to the Cold War: Poems New and Selected. He has received NEA and Ingram Merrill Poetry Writing Fellowships, a Pushcart Prize, and publication in five editions of The Year's Best American Poetry. Allen's earlier recent poems have appeared in or are forthcoming in Boulevard, American Scholar, Ploughshares, Hudson Review, Atlantic Monthly. Yearly, he and his wife drive about 10,000 miles around America, searching for poems and great cheap Chinese food. They live near a small Zen lake in Connecticut.

He doesn't kick anything. He's so into himself
he roils, head down in that James Dean way,
shoulders flexing. Look out, pigeons.
Look out beauty shop owners. Look out governments.
Every store window will explode to mark his passing.


The Puzzling Beauty of the Here and Now.

The puzzling beauty of the here and now
affected him strangely,
like names for Chinese watercolor brushes:
Smoky Cloud, Keeps The Best Point,
Crane Neck, Giraffe Neck, Red Pine, White Goose,
and a certain rise of the Merritt Parkway
when all you can see ahead of you
is the sky going on. How puzzling
that “stone breaks open the stone in stones,”
and “peaks link up with peaks that dominate peaks,”
as Shin Tao Chi Shon—sung wrote
in his beautiful painting one morning
while waiting for a friend to come across the mountain
to stay only an hour
after an arduous trip of three days and two nights,
and it would be two days and three nights back. They had tea,
a heron stood in the lake that stretched before them.
There was the even-spaced ringing of a bell. . . .
How puzzling to come across such stories
in a book that's lain around the house for years,
or on a message board tucked far down inside the Internet
on an out-of-way Website you can only reach
by drifting through meadows. . . . Once there,
he also found links to The Cherry Orchard,
a little Sarabande by Bach,
and into one of those sunlight and brocade interiors
beloved by Dutch painters.  Jigsaw puzzles.
Word games. Mazes. Detective stories.
Crossword puzzles. Anagrams. Hidden Things.
Pin the Tail on the Donkey. Where's the donkey?
The video game search across the universe.
Puzzles made from bent nails. The puzzle of Atlantis.
Who was Jack the Ripper? Where's the lost gold?
When shall I be found?  “The Here and Now-
that sounds like a Bed and Breakfast place,” said a friend,
“or the name of a minor rock group,
the kind that begins and ends playing high school proms
and in town hall gazebos.” Enigma.
Quandary. Toss of the dice.
Riddle. Conundrum. Charade. “How beautiful
for spacious skies,
for amber waves of grain”
always went through his head as he crisscrossed America
east to west, driving the Interstates. “. . . for purple mountain majesties
above the fruited plain,”
although he'd never actually seen a purple mountain
but once, in New York City,
he saw a sculpture of a purple cow.
It had its head down
and was munching on the kind of green cellophane grass
you find in Easter baskets and in baseball stadiums.
“. . . America, America.”  Picture a house in Kansas or Oklahoma
with an infinite number of doors that lead to rooms
that lead to other doors. Each door is a sideways lightswitch
illuminating what's inside each further room. You're searching,
but every time you think you've found the answer
another door opens. . . . We built this city.
Come here, Watson, I need you. . . . If the soul
is a pattern of information, no wonder
there are complex souls and simple souls,
but why does every soul weigh precisely 21 grams
as it flies into the air beyond the body's death?
“You don't know what's happening here, do you, Mr. Jones?”
He opened another door,
and there was a field of sunflowers. It was September,
two days from 9/11. He opened another
and there was no Iraq War, no Abu Ghraib prison.
He opened a third
and there was a New Mexico pueblo,
a black and white rainvase on a window ledge,
sand and the noonday sun. . . .  Dimension after dimension,
life after life, each separate and the same,
folds in a Chinese fan,
Fingerprints. Footprints.Revolver in the gutter.
A letter hidden in a secret drawer.
The broken pearl necklace. DNA.
The Case of the Chinese Boxes that was never solved.
. . . . They spoke maybe two dozen words before they parted,
which have not come down to us,
but he liked to think Harry Belafonte echoed them
in Sylvie:  “Bring me little water, Sylvie, Sylvie,
Bring me little water out.
Bring me little water, Sylvie,
Every little once in a while”
and the lost amphimacer of the Here and Now,
the puzzlement of it,
and the heron, the lake, and the bell.

Whenever they occur in a shaded garden,
an art photograph, a painter's memory,
almost helplessly the eyes go to them,
into the more vivid colors,
the yellow not really yellow nor golden,
but a glowing that tips everything close by
into near-onyx. On a Winslow Homer wave,
they're completely the clouds' gift,
momentary partings from on high,
highlighting crests of dark breaking curves
that rise from all that roils beneath them.
At a meadow's edge they flicker like lost romances,
lingering unexpectedly beneath maples and poplars,
until a meadow breeze or just the planet's rotation
mottles each patch of sunlight with leaf shadows
so translucent, so filling in jigsaw puzzles,
all that remains are fringes, light embracings.


Dwelling in the Moment

It's made of a few brushstrokes,
the roof a downward sweep, the walls
two swift verticals of thick dark ink,
no smoke from the chimney, no face in the window,
but in the yard a single cherry tree
and in the hills beyond, blue mountain mist
floating over blue mountains.  Almost no one
dwells here.  Almost no one
has crossed the little bridge that leads to here,
looking over the railing
to see her own reflection staring back.