"I Want Her to Burn Me Forever," by Abby Horowitz 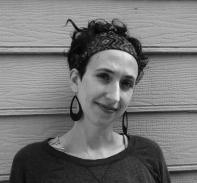 Abby Horowitz is a graduate of the Warren Wilson MFA Program for Writers. Her fiction has appeared or is forthcoming in Bellevue Literary Review, Black Warrior Review, and Slice. She lives in Atlanta with her family.

I Want Her to Burn Me Forever

I once had a friend who believed in happy endings.

In the weeks before his wedding, the woman he was going to marry kept tapping at her chest with one pretty finger and warning him, Don’t forget, it’s pretty dark in there.

And my friend the groom would put his ear to her chest for a listen, saying: Just some regular thumps, same as the rest of us.

He said this because he loved her, not because it was true. I mean, my friend had seen the blackness she was talking about. The bride picked up bad moods like other people found bad smells in the air. During her dark spells, she would turn nasty: slamming doors, shouting curses. Sometimes she climbed into the bathtub and bit her arms until they bled and there were four indents in their dining room wall where one night she’d jammed a fork into the plaster. (I’d seen it myself when I went over there for dinner.) And there was something else too—a night she had moved from a fork to a knife, but the details of that evening, my friend never chose to say.

After that incident, she agreed to check in to a psych hospital on the edge of Atlanta. That time was hard for my friend, but good for me; I saw him then almost as much as I had when we were roommates in college. He missed the bride, that much was clear, even as once or twice he wept when recounting her bouts of darkness. Many times he asked me how I saw it, if I thought their marriage had a chance. But I never said anything—he loved her, and who was I to pop that balloon?

When they released her from the hospital, the bride was ten pounds thinner and her left arm was tattooed from shoulder to elbow with something that looked like a comet. My friend stared at her arm in surprise, but the bride didn’t explain it, just opened her arms and hugged him so closely he could feel the beat of her heart, and it was a heart now filled with sunshine, my friend knew. He knew because over the curve of her newly-inked shoulder was a sign welcoming them to the city of Atlanta, with a print of the city seal underneath. I mean they were standing in a vice-tight hug right below a picture of a phoenix rising up from the ash—of course she was cured.

Back at their apartment, the bride lined up her medicine bottles on her dresser like a family of orange dolls and each day she went down the line and with a series of swallows took what they had taught her to take, there in the hospital. One day my friend placed a ring box at the end of that row of pills; now that she seemed stable, he couldn’t wait to say: I do, and then: The end.

I was the best man at the wedding so I saw everything. When the bride entered at the back of the hall, the guests applauded, even the rabbi cheered. Because everyone’d heard rumors about what that poor, depressed bride had been through, and then here she was looking like some glittering angel. She looked like someone who was weller than well, she was radiant.

She started slowly circling my friend the groom, but she didn’t stop after seven circles like she was supposed to, she just kept on walking. It was my job to keep count, to flash her a signal once she’d made the seventh circle, which I did, but she ignored me, she ignored us all. The rabbi tugged on his beard and my friend coughed lightly in his hand to get her attention, but she just walked faster. I could feel a hot wind coming off her each time she walked past; the little clicks of her heels were sizzling like firecrackers and whatever that design was on her left arm, it was giving off sparks, I mean she was electric, she was a lightning bolt in a wedding dress, I mean I was waiting for the chuppah to go up in smoke.

She walked on the whole time with a smug little smile, like she didn’t notice a thing, and you could see her heart beating through her dress, and it was coal black.

Her heart, I mean.

Finally, she stopped and turned to my friend, who was panting a bit, as if he had been the one running in circles. She flicked up her veil like she was swatting a fly. Her eyes were smoldering.

I could swallow all the pills in the world, she said, knocking at her chest with her fist. But this heart is still mine. She shrugged, and put her hands on her hips. This is me, babe, forever and always. From this world to the next. Take me or leave me, what do you say?

By that point the whole hall had emptied out, except for a few people huddling in the back. The rest of them, I don’t know, maybe they ran off to call the fire department or something, maybe they thought those flames pouring off her were the kind that could kill you. And maybe they could.

Anyway, I never heard what my friend answered. All I saw was the back of his tux as he ran down the aisle holding hands with that fireball of a bride.

The next time I saw my friend, he’d grown a beard and his arms were lined with scratches. I’d found him at the grocery store and convinced him to go out for a drink. He mounted his bar stool like an old man, and I watched as he downed a whiskey in two swallows. Married life is amazing, he told me. His eyes shone strangely and there was a tremor in his hand. I love that black-hearted bride, he said finally, setting down his glass. I want her to burn me forever.

‹ Fiction up "In the Crowded Spaces," by Cathy Ulrich ›