"Pedal Strokes in the Dark," by Mary Ann Thomas 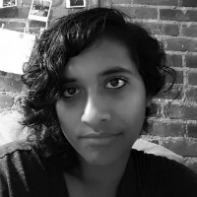 Mary Ann Thomas is a New Jersey-born-and-raised queer South Asian traveler. She has been published in Brown Girl Magazine, Word Riot, is a VONA/Voices fellow and writes about her adventures as a travel professional and long-distance bike tourist.

Pedal Strokes in the Dark

It’s on the other side of a Wyoming mountain pass, biking with the flow of water east, that striations of burning red rock demarcate the passage of time on earth. Some rock formations rise against gravity; they don’t appear hard, like the granite peaks of the Grand Tetons, but seem soft, like a good rain will wash them all away. They tilt toward my destination, leading me out of the Rockies. The road gently follows the wide curves of the Wind River; I ride in the bed of canyon on either side.

Even more unearthly colors show themselves as I continue, striped against the hillsides: golden yellow at the top, deep purple next, dusty sage green, and rose at the bottom. A simple wire fence demarcates private property, as this road winds through the Wind River Indian Reservation. The road is consistently studded with telephone poles. On this trip, I find I’m often chasing telephone poles, the path of least resistance through valleys and across mountains. I see no other signs of development, no homes, no cattle, no ranches or even busted cars. Occasionally, a dirt road appears, tempting me to ride deep into the canyon beyond.

Under the bluebird sky, a tailwind pushes me forward. I stop often for pictures and fruit snacks. With each pedal rotation, I retreat from the mountains and feel the air warm my brown skin. I peel off layers until I’m only in my red tank and short bike shorts, with my army belt swaying up and down with each pedal stroke. I watch the landscape fall away, the fence line, the tall brown sticks carrying electricity, and the unbelievable colors.

There’s nothing out here.

On the Wyoming state highway map, dots mark potential towns. When I reach the first dot, anticipating ice cream or air conditioning, I find only a gas station. Burly men in hard hats and camo drink coffee at tables near the window. I lean my bicycle against a wall outside and enter with my food bag. I unpack, make wraps out of flour tortillas, tuna packets, soft, warm cheddar, and wilted spinach. A bearded man in work overalls asks where I’m going, smiling with his eyes, and I tell him.

“Is there anything further down?” I pull out the map and point to the dot 30 miles away. “Like, is that anything?”

He laughs and looks out at the road. “No, there’s nothing. I’ve lived here all my life and there’s nothing out there for about an hour.” Driving. An hour of driving is about a day on a bike.

I hope he’s wrong, but I don’t know why he would lie. I thank him. When I’m done with lunch, I fill my water sack with a hose outside. Twenty-two extra pounds of water to prepare me for Eastern Wyoming. Twenty-two pounds of water to slow me down. I soak my bandana and wipe the dust off my face. I pour the hose on my head and instantly gasp for air.

There. Ready for the nothing to come.

I enter an America I depend on, but never knew. Resource and mineral extraction live here. Rather than layered millions of years old rock, oil pumps become the backdrop of my days. They stand erect, a single arm moves up and down, up and down. They pull decomposed dinosaur carcasses that we now use as fuel from the earth. Instead of auto repair shops on the outskirts of town, Oil Field Equipment shops line the road. The rank smell of oil refineries, which I’m so familiar with in New Jersey, fills my nostrils and eyes. I ride out of Casper on a frontage road north. I pass a herd of a hundred sheep who dawdle way too close to the highway. I watch oil fields and historic oil fields along the way. I camp near a junction of two highways, hidden from passing cars by a blind curve. With each flash of light against my tent, I wonder if a drunk driver is going to miss the curve and fly into me.

The next day, I reach the town of Wright. The landscape transitions from one form of energy extraction to another. I enter the Thunder Basin Black Coal Mine, the largest coal mine in the world. Alongside the road, blackened hills have been carved open and reduced to piles of rubble. Vehicles five times the size of an army tank, with a single tire larger than a Hummer, rumble across uneven paths and transport the excavated earth. Freight trains full of coal, every single car piled high with black debris, stretch more than a mile long. Signs read in all capitals, “Blasting Area/Orange Cloud Possible/Avoid Contact,” and I wonder what Orange Cloud is and how to Avoid Contact while I’m on a bike.

I cross the Thunder Basin National Grassland. Prairie dog families pop out on either side of the road and play against an endless dry landscape. The white butts of pronghorn antelope bounce away and then pause as they curiously turn their heads back to me, the strange, slow-moving metal creature on their road.

The road no longer steadily carries me downhill, but instead climbs long hills, only to drop down the other side to a small trickling stream at the bottom. The cool relief of the low stream is masked by the mosquitoes that rise from it and chase me. The road ascends again and my heart pounds. There’s never enough downhill to give me momentum for the up. Not a single spot for shade. No gas station or convenience store. After five days with no grocery store, I’m out of oatmeal and snack bars. I eat melted Mounds bars every two hours. My lips are chapped, I drink gallons of water, constantly refilling from my canvas water bag.

Only workers in company pickup trucks drive this road to and from the largest coal mine in the world. I pray one will offer me a ride to Newcastle. I list my desires and justify them to myself. It’s been five days in the desert without a shower. Five days without internet. Five days without laundry. I fucking stink. Five days without a bed. Five days of biking nonstop, three of those days ended up being over a hundred miles. Even if the miles were downhill with tailwinds, it counts. Five days since I spoke to someone other than an ice cream man or a gas station cashier.

I hear a rumble behind me. The white pickup truck slows to my pace and a tanned worker says, “Want a lift to Newcastle?” I pedal. I pedal. I’m about thirty miles away. It’s 5 pm. I can make it by sunset.

“No, that’s okay,” I say and watch the rise and fall of my knees as I continue forward.

“Suit yourself.” He laughs as he drives away.

“Fuuuuuuck.” My head drops. “No wait. I want a ride!” I yell to the exhaust as he drives away. Why the fuck did I say no?

A few miles from Newcastle, I watch sunset against the oil pumps, the perpetual rise and fall of resource extraction. It's August and Mike Brown was murdered a week ago. Alone, wandering through the deserts, canyons, and arid colors of Eastern Wyoming, I’ve been checking my phone at every snack break and questioning my role in murder. I’m replaying violence in my citizenship, pedaling to the tune of moments I can’t affect, like the war on Gaza that has already left thousands of Palestinians dead, and the killing of Black folk at the hands of government sanctioned murderers. Wyoming is startling with its beauty: few states are deemed flyover with more determination, and I hear over and over again that there are more cows than people.

Can I simultaneously be in awe and have my heart break for a country that props up wars around the world and against its own people?

Can I share pictures of unimaginable beauty, get lost in staring at the palette before me, maintain wonder at the strange and inexplicable rock formations, while mourning the tear gas sprayed on peaceful protesters, the media narrative of looting while ignoring racism and poverty, and the truth that the instigators have always been a racist police force?

Can these contradictions exist on lonely Wyoming roads, where despite the claims, not even cattle accompany my ride?

When I finally make it to Newcastle, Wyoming, it is only after I've turned down multiple offers for a ride, and then immediately begged and hoped the person would come back and offer again, only after calling a hotel and explaining my story, only after taking an emergency shit on the dry land at the edge of town, with cars passing and people staring, at the moment where dusk meets nightfall so they can still barely see me. Alone? Lonely? Stupid? Afraid? It's subjective. But I remember loneliness less than hunger, I remember fear less than I do anger at the historic moments I can't participate in, the movements I can't physically support, the body I can't lay down on the line, because I'm bicycling in Eastern fucking Wyoming.

Desperate and exhausted, I shower. Hot water against greasy scalp, I watch brown dirt and black bike grease run in rivulets across the shower floor. I shampoo six times, scraping layers of accumulated grit from my skull. I scrub my bike shorts and sports bra with the bar of soap, twist and wring it, and repeat until it doesn’t smell like me anymore. My few pairs of underwear and shirts in a heap, I squirt the remaining shampoo over them and kick them around, then scrub them, too, until there’s nothing else to clean with. I wash and wash until I feel like a person again, a person who doesn’t spend their time recreationally destroying their body. I wash the solitude of the last five days away. I wash until I can stand tall again.

I put on my pink dress, the only piece of off-bike clothing I carry. I head across the street and buy a tall boy, a sandwich, and a family-sized bag of salt and vinegar chips. Drunk and alone, I sink into the softest bed I've ever slept on, keep the comforter splayed out beside me with only a sheet to cover my freshly cleaned legs, because I'm sick of being too damn hot. I listen to the drip of my hand washed clothes drying, the water slowly pouring out of them and onto the tile bathroom floor.

Until I fall asleep, a bike trip sleep.

‹ "The Walk Through," by Kirsten Voris up "Out Here Where Everything Burns," by Meghan McClure ›