"In the Crowded Spaces," by Cathy Ulrich 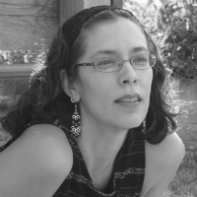 Cathy Ulrich is a fiction writer from Montana. Her stories have appeared in Monkeybicycle, Fiction Southeast, The Citron Review, Paper Darts, The Atticus Review, Cheap Pop, among others. A single mother, when she's not busy working, she enjoys playing the clarinet and beading.

Cathy Ulrich's Website
In the Crowded Spaces
If I were a train pusher in Japan, they’d give me a cute little uniform with a skirt and a matching cap. They’d expect me to stand pigeon-toed, like all the Japanese schoolgirls.
They’d say: Rush hour is coming. Take your places.
If I were a train pusher in Japan, I’d be in charge of getting the women and children on the trains. They wouldn’t like being touched by a gaijin, but it would be better than having the men do it, whose hands would linger, whose palms would sweat.
Let me help you, I would offer, and then push them into the train so everyone would fit. The doors would close and the trains would go off and the people inside would be so tightly tucked together they could barely breathe.
If I were a train pusher in Japan, I would never ride the train during rush hour, not even on my days off. I would sleep in on the futon in my twelve-tatami apartment, and wake to the smell of miso soup for breakfast. I would never tell my Japanese boyfriend that I preferred a Western breakfast: eggs and bacon, or pancakes with butter melting on top. I would never tell him that I don’t even like miso soup.
Arigato, I would say, and we would eat our miso soup together. I would drip some on my chin and he would kiss it off.
If I were a train pusher in Japan, my Japanese boyfriend would take me to a summer festival. I’d wear a yukata with a hibiscus print, though the koi pattern would have looked better on me. I would have cried when I tried it on at the store.
Please, I’d say to the saleslady. Please, I hate fish so much.
My Japanese boyfriend would say how nice I looked in the hibiscus yukata. He’d take me by the elbow as I struggled to walk in my geta. I would take small, tight steps, and listen to the clatter of my wooden heels on the pavement.
The festival would be for some lesser local god. There would be paper lanterns lit, and stalls selling yakisoba and dango. There would be a stall for catching goldfish, but my Japanese boyfriend would go the long way round, so I wouldn’t have to worry about those fish, all those fish, coming after me.
I know fish don’t do that, really, I’d say, and he’d squeeze my hand.
If I were a train pusher in Japan, I would see some of the people I had pushed onto trains at the festival. They would recognize me with my glasses and tattoos peeking out from under the fabric of my yukata.
Oh, it’s you, they’d say.
It’s me, I’d say.
Don’t you look cute in your yukata, they’d say. So kawai.
If I were a train pusher in Japan, Japanese boys would smile at me in my yukata when my boyfriend’s back was turned. They’d say: Oi, what are you doing later? They’d say: Have you ever worn a yukata before? I could help you take it off.
I wouldn’t say anything to them. I would hurry back to my boyfriend’s side. I would share a slice of watermelon with him. I would kiss him on the side of his face in front of everyone else, because it would be all right for me to do that sort of thing.
She’s American, they’d say. What do you expect?
If I were a train pusher in Japan, my boyfriend and I would still be at the festival when the fireworks began. They would burst in the air above us, pretty as chrysanthemums.
How lovely, people would say.
There would be more and more of them as the fireworks went into the air, crowding round us, pressing in. Some of them would say: Now you know. Now you know how it feels. My boyfriend would hold my hand. We would barely be able to breathe.
‹ "I Want Her to Burn Me Forever," by Abby Horowitz up "The Woman in Room 248," by Elizabeth Naranjo ›