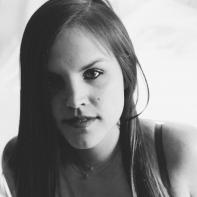 Kimberly Grabowski Strayer is a poet and horsewoman from Kalamazoo, Michigan. Her poems have appeared or are forthcoming in Pretty Owl Poetry, VECTOR Press, and 45th Parallel, among others. Her chapbook, Afterward, is forthcoming from Dancing Girl Press. She is currently pursuing an M.F.A. in Poetry at The University of Pittsburgh. 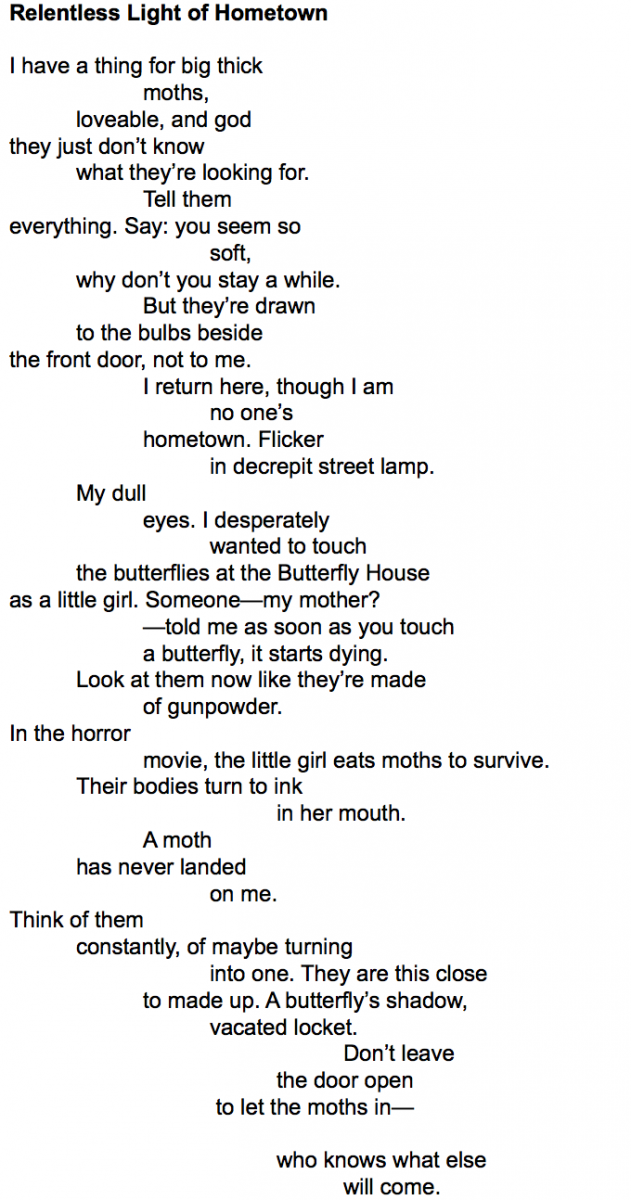 Grown into part-girl part-horse.
from thinking about body so often from fusing
with the horses. Said “horse is an excess of body
a site of so much body.” I went to the bar
with a friend who was not horse
but swallow:
would pick up and carry small pieces
of hay from the floor.
to build her nest. always building nest
bursting thirsty. Offered me drink
after drink and I gulped it.
down. I was becoming horse
with a blind spot at the straight-ahead
of vision. I did not choose.
to leave the bar with the boy.
I imagined myself led:
at the end of a rope.
It is imagining that keeps horses.
at the end of a rope. Do not know
we are strong. Not about the size
of hearts hardness of hands. The boy made me.
touch him. Wanted me to sleep
with him but underestimated:
how much of me was horse. I worried
the touching. The myth about horses:
we have no nerve endings in our manes.
The myth about horses: we are wild
and free. The boy pulled my hair it hurt
but I did not tell him to stop.
I know don’t overuse a word. My bones
were thick I had never had soundness
issues. A horse is said to be cast:
when she has lain down or rolled
managed to position herself with her legs.
so close to the stall wall
she can neither get up
nor reposition herself.
to roll the other way.

I'm learning so many different ways to be real.
The real of broken body, landing on the ground
detached from imaginary horse-girl-body. The real
when I remember I'm real. I tattoo a fairy tale
on my arm—both real and not real. Again, blood—
very real. The real of pain, but no way to remember it—
is that real? When my friend’s relationship ends,
she says it happened last weekend, but I didn't
know if it was real or not. The real is always
an end. See, there's the real that's not real until
you tell someone else. I pick a leaf up off the ground
and I say gingko I say oak or maple. If I believe
Lacan, we lose the real when we turn to language—
and maybe the poem is the real machine. I want
to say sugar—that's real. Or animals eating other animals.
Not something we want, but something we can't avoid.
I read somewhere that a person held at knifepoint
is less likely to fight back than one held at gunpoint.
A gun is an imaginary. That's how this machine works.
The idea is to open some kind of fissure—more
like a tunnel through the earth than a window.
A passage painted in blood. There's no way to remember
being real. She goes to sleep, and she wakes up.

‹ A Poem by Kate Fetherston up A Poem by Marilyn McCabe ›