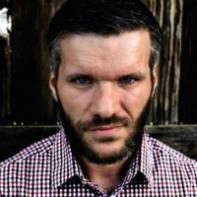 Matt Bell is the author of the novel Scrapper, published in September 2015. His last novel, In the House upon the Dirt Between the Lake and the Woods, was a finalist for the Young Lions Fiction Award, a Michigan Notable Book, and an Indies Choice Adult Debut Book of the Year Honor Recipient, as well as the winner of the Paula Anderson Book Award. His writing has appeared in Best American Mystery Stories, Tin House, The New York Times, Conjunctions, Gulf Coast, The American Reader, and other publications. Born in Michigan, he now teaches creative writing at Arizona State University.

"Stories as Things," an Interview with Matt Bell.

This interview was conducted via email by Interview Editor Izzy Montoya. Of the process he said, “Bell is a virtuosic writer and well of knowledge. I was eager to tap into his experience and share it over a public forum. He did not disappoint.” In this interview, Bell discusses character titles, uncertainty, and fairy tales.

Superstition Review: I have to take this opportunity to ask you about names. In my own writing, I often find myself getting way too caught up in the symbolism of my character’s names. It begs the question: what’s in a name? The vast majority of characters in this collection go unnamed. Instead they are referred to simply as “the boy,” or “the man with rough hands” or “the sister.” Why use these names?

Matt Bell: Well, one way around the overly symbolic naming of characters is, of course, not to use names—but that's not the only reason to do this. Often it's a simplification: if there is only a father and a boy, why do they need names? But it also reduces a character to his or her essence: if the "man with rough hands" was named Bob, would that be more or less true than "the man with rough hands"? And most of the "names" are really "titles," and often relational: to be "the husband" implies both a role with responsibilities and a relationship to someone else. So does "son" or "daughter" or "teacher." Those seem like useful ideas to reinforce throughout the story—name as role, role as task—that an everyday name doesn't. You and I both know each other as both "Matt" and "Izzy" and also as "professor" and "student," and those are not exactly the same relationships, even if we don't dwell on the distinction that often.

SR: Many of your stories in this collection, especially the title story, function as allegory. Why do you think you find yourself writing in this technique, what benefits does it afford you as a writer?

MB: For what it's worth, I never ever think of anything I'm doing as being allegorical: that's just not the mode of my thought. The stories aren't codes, standing in for some other thing: they are what they appear to be, first and foremost. (As Bret Anthony Johnston said once, "Stories aren’t about things. Stories are things. Stories aren’t about actions. Stories are, unto themselves, actions.") That there are other readings of the stories is fine with me, but it's not the goal. And the titles of the stories seem the same to me: they're often very descriptive of the actual action of the story, as in "A Long Walk, With Only Chalk to Mark the Way," which is literally about that, or "Her Ennead," which is literally a woman's set of nine, and so on. So while I'm sure there are writers who set out to write allegory, that's not me: I set out to write stories, and if they can be read allegorically too, that's a bonus.

SR: I wanted to ask you about this paragraph:

“The man with rough hands would open the door, and then the sound-boy would slip out, into the hallway and through the window in the hallway, where he would use the tree or person or wall to get away.”

It’s obvious that the boy sees what’s outside of the window as his only chance for escape, but why the uncertainty? What does it mean to you that the boy is so dependent on something he can’t quite name?

MB: I don't know how much I want to unpack that for the reader—so much of what I want to create is a space where the reader owns most of the emotional, moral, and intellectual logic putting all the pieces together—but I do think that this goes back somewhat to your first question: naming as an action is an important and powerful thing. To know the names of things is, in a biblical sense, to own them: the first thing Adam does in the Garden of Eden is go out into the world and name all the animals and plants, establishing his dominion over them, as the one who names. So to not know the name of things—to not even know your own name—is a kind of powerlessness. But I'm not sure I was thinking of that when I was writing the story: that's more of me, now, interpreting what was, then, more mysterious even to me.

SR: This phrase also became the title for the whole collection. Can you tell our audience more about why you want your readers to begin with this fragment?

MB: I think there's a lot of uncertainty and slippery identities in the book, and that seemed a way to prime readers to pay attention to those moments. On a more practical level, it's also one of the seven previously uncollected stories in the book, which almost had to be the title choices, if the book was going to share with one of the stories.

SR: I really wanted to ask you about “Wolf Parts,” A story that explores the fairy tale of Little Red Riding Hood in endless variations. Reading it, I was reminded of Frost’s “The Road Not Taken.” It seems “Wolf Parts” has answered Frost’s lament “And sorry I could not travel both/ and be one traveler…” How did you find yourself writing in this unintuitive form?

I often write in fragments, although not all of the stories stay fragmented in the end. (Even my novels are drafted in small chunks, mostly.) But in this case I set out purposely to write this way, in part inspired by Norman Lock's brilliant novella-in-shorts Grim Tales, one of my favorite books, and in part because I am generally obsessed with "Little Red Riding Hood" and had been rereading a number of the oldest versions of the tales. Across all the different tellings, there are a number of shared elements—Red, the grandmother, the wolf, the woodsman, stones, axes and knives, the path of needles and the path of pins—and so I set out to try to rearrange those elements as many times as I could, setting them against each other in new ways. I think there are 40 tellings in the final story, out of 60 or so that I finished.

For what it's worth, this kind of writing isn't "unintuitive" to me: it's getting at the heart of a story, asking what else it's capable of. Fairy tales are a particularly inexhaustible form: I could retell "Little Red Riding Hood" forever. I imagine that as a culture we'll do just that. It's exciting to work through a story that good by making your own version of it, or even to make many versions, as I did here.

SR: This book is divided into seven sections. Can you tell us a little more about how you decided to divide and organize these stories? What commonalities do you see between stories that are in the same section?

MB: Arranging a collection is always an interesting task, which I think of as trying to find some kind of book-length arc that would be as satisfying as reading a novel: some readers won't read cover to cover, but if someone does, then there should be some kind of reward. One way to begin that task is to look for mini-arcs between groupings of stories, which is how I ended up with the sections I did. Sometimes it has to do with shared plot types or elements, other times with thematic material, sometimes I'm looking for movement between different kinds of emotions or ideas. To give a specific example, the section containing "A Certain Number of Bedrooms," "The Collectors," and "An Index of How Our Family Was Killed" all have to do with family tragedies and also with characters who are trying to create some kind of structure in which to organize their grief and experiences: the blueprint, the hoard, the index.

SR: I want to ask you about post-apocalyptic stories. There are many in this collection and it is a setting you explore in some of your novels as well. Is there something revealing about taking our stories to such places? And how do you find common ground between your lived experiences and these massive tragedies?

MB: I believe in defamiliarization more than just about any other technique: by taking the familiar and enstranging it, we end up with a story that can be approached with new eyes and a fresh heart, allowing ourselves to re-experience emotions and ideas as if for the first time, even though they might be elements of our everyday lives too.

SR: One motif I noticed in this collection was the alien offspring. “Cataclysm Baby” explores this most directly, as each authorial voice struggles to understand their children. What are your interests in this idea, do you feel this is a common experience?

MB: I don't know that I thought of it this way while writing, but it seems pretty obvious that every generation finds the next to be a little alien, a little incomprehensible. How did these people descend from us, and why won't they conform to our wishes? "Cataclysm Baby" probably takes that idea to a far extreme, but the core experience of fathers trying to understand their children is old, old, old. This is another example of that defamiliarization technique: making parenting so extreme that it's easy to see anew how loaded an experience it always is. A person pushing a child in a stroller on the sidewalk is an everyday sight, so it's easy to forget what an extraordinary experience both the parent and the child are in the midst of.

SR: Are you familiar with Muppet psychology theory? It basically says there are two types of Muppets: order muppets (Big Bird) and chaos Muppets (Animal). Which one of these types would you most identify with your writing process?

MB: I haven't heard this, but I like it. Without knowing much more about it, I'd say that it's chaos end to end in a first draft, and then order gradually asserts itself during revision. So hopefully I've got both kinds of muppets tucked away somewhere, waiting for their chance to shine.

SR: I’ll end with our traditional question. What does your writing space look like?

MB: I just moved, so I'm in a new office now: whatever book I write here, it'll be this room's first. It's a reasonably simple office, longer than it is wide. My desk is against the far wall, and it's flanked on both sides by three bookshelves, with a seventh bookshelf directly behind me. It's a good place to work so far: a tunnel made of my favorite books, and at the end of it a place where I can try to add my own. Good enough. More than.