"Where I'm From," by Julie Marie Wade 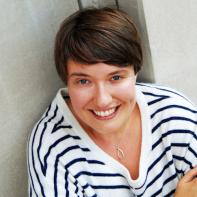 Julie Marie Wade is the author of eight collections of poetry and prose, including Catechism: A Love Story (Noctuary Press, 2016) and When I Was Straight: Poems (A Midsummer Night's Press, 2014). Her first lyric essay collection, Wishbone: A Memoir in Fractures (Colgate University Press, 2010; Bywater Books, 2014), won the Lambda Literary Award for Lesbian Memoir, and her newest collection of poems, SIX (Red Hen Press, 2016), was selected by C.D. Wright as the winner of the AROHO/ To the Lighthouse Poetry Prize. Wade teaches in the creative writing program at Florida International University in Miami.

You have to imagine the world as Mike Brady saw it: everything in miniature and far more insular than you’d like to believe; uniform, of course, but from that era before McMansions and gated communities. Here the gates are implied. Think clean-swept carports instead of multiple garages, a second car parked at the curb. Think red brick, brown shutters, chimneys puffing white storybook smoke. Think paved walkways and pert screen doors. For the yards, picture decorative stepping stones and lattice fencework. Expect four-tone windsocks, American flags, flower baskets overflowing with geraniums. Imagine epic quantities of peat moss and mulch, grass as green and manicured as a golf course. How short should the grass be? Consider the hair of the husbands.

Nobody rents in this neighborhood. That isn’t by accident; it’s by design. Renters are too close to squatters, the locals will tell you—but first you’ll have to do something to earn their trust. You can start by washing that car of yours, after work one evening or early on a Saturday. What model is that? they’ll say. What year? The conversation starts across the hedges, which are groomed precisely as show dogs and grown nostril-high. That isn’t by accident either. How you wash your car says a lot about who you are and whether you’re really fit to be living in this neighborhood. There should be a pail frothing with hot suds, a couple of clean sponges, a garden hose uncoiled from the side of the house, a chamois close by, and Brill-o pads in abundance. Never skimp around the tires. If you have children, especially sons, they should take great care with the scrubbing and buffing, and when they’re done, you should be called over for inspection. A neighbor may join you. This is the first sign you’re beginning to fit in. And the wife, he’ll say, hands deeply tucked in Docker pockets. What does she do?

This, my friends, is a tricky question. A woman can have a job in this neighborhood as long as it’s clear that it’s not a career. Acceptable responses include She works part-time over at that little boutique in Westwood—keeping busy, you know, or she was a teacher until the kids came along, or she styles hair on occasion. No power suits with pumps in this part of town, no sir.  The houses are mid-century, and so are the values. You can be rich, you can be retired, or you can be the next up-and-coming, hard-working American squirreling away for the college fund, the travel fund, the new deck out back, the Jacuzzi you saw on TV. My mother worked at the bank to build a nest egg in the shape of a European gazebo. She wasn’t interested in tiki torches with a canopy. She wanted the one where Rolfe and Liesl danced, a glorified rotunda with a bench that wrapped all the way around—ideal for waltzing in rainstorms. A tennis court, too, if there had been enough room. And an in-ground swimming pool that raised the property value at least a hundred grand. One out of three isn’t so bad, but the bulldozer was so loud that someone—she had her suspicions who—came in the night and slashed the tires.

It’s almost impossible to buy in their neighborhood now. A quick click on Zillow, and you’ll see what I mean: a modest three-bedroom on the east side of the street is priced at half a million, easy. My grandmother’s house: corner lot with daylight basement, living room window with sparkling glimpse of the Sound: six hundred twenty-five. My parents live west with unobstructed views. Ferry boats and sail boats, islands and mountains galore. You don’t believe it when you step inside. Your breath catches in your throat. You think someone must have hung a painting on the wall. But the low ceilings, they’ll remind you, and the tiny closets, too. The attic is almost good for nothing, just a crawlspace really, and that wall that was keeping out the light—they had to knock it down, replaced it with a pair of gleaming French doors.

Without much prodding, my father will tell you how the property taxes are killing him, even though he owns the house now free and clear. My mother will tell you how she still never got that gazebo—and as for tennis, well—she’d have to stand in line to play a game these days. Did you know someone found a condom on the court behind the hardware store? It’s appalling. I will tell you how I’m supposed to be living there right now, in my childhood bedroom with the white wicker rocking chair (say that three times fast) and the Kim Anderson prints on the walls. I liked them for a while, I’ll admit, along with bad reprints of Raphael’s cherubs on hat boxes and greeting cards. But my mother loved them: a little boy handing a rose to a little girl, only the flower and the flush of their cheeks in color. This seemed to reassure her that everything was right with the world. It was the antidote to sex in public spaces and men with ponytails, to chipped teeth, broken curfews, and strangers strolling blithely around the neighborhood. Who did they think they were? And thank Jesus Christ Almighty in Heaven for giving us Anne Geddes. Nothing moved my mother more than a human baby crammed into a clam shell, chubby-cheeked and mugging for the camera.

Without much prodding, I will tell you that I am twelve years late for dinner, that I was supposed to be saving my money all these years while living at home, not squandering it on a foolish thing like freedom. When the Right Man came along, I’d know it, and my parents would know it, too, because they’d never permit us a moment alone, unsupervised in their daylight basement. He’d wear Stafford shirts from JCPenney, and my mother would put out her fancy flatware and her Lenox plates to make just the right impression. My father would slap his back a lot and say, So, do you golf, Son? What are you doing this weekend? I could never get my daughter to play. And when I married the Right Man in the Right Way, my mother promised us a small fortune in IKEA furniture. Their prices are very reasonable, you know, and my father loves the Swedish meatballs they sell in the café. It’s his heritage, she concedes, but she was getting hooked herself on the minced meat gently spiced and gravy-soaked. She’d have to cut back if she was going to be a svelte and sexy mother of the bride.

We’ll help you with a down payment, my parents always said. We’ll make sure you get a good deal on a house in this neighborhood. I was five the first time I heard it. How often did they repeat the refrain?  As often as there are rocks in that rockery, cars on that ferry, tennis balls lodged in that gulley behind the fence at the back of the yard. But you have to do your part, too, they cautioned. Get good grades. Stay out of trouble. Build your nest egg before you have any bills of your own to pay.

Where I’m from, debt is a sign of weakness, even if the only one you owe is Sallie Mae. College is a given of your middle-class background, but graduate school a dalliance, unless you go on in medicine or law. Follow your heart by way of your paycheck, they might have said. Be true blue and vote red. You love America, of course. You take your hat off at the ball game and place it over your heart. You tear up a little during any rendition of the National Anthem. But you also drive a Honda for the gas mileage, a Volvo for the safety record. Most of the tags in your closet, if you turn them over, mention something about China or Vietnam.

Here on the Other Coast, I still dream sometimes of the life I left behind. Dreaming is different, of course, from yearning. I close my eyes and recall camellias, how they scattered blossoms-up on the immaculate front lawn, how I learned to turn my cartwheels around them. We played croquet there, too, after dinner, pushing the metal wickets deep into the earth, waving with our mallets whenever someone we knew passed by. It wasn’t always sorrowful, in other words. It wasn’t always some suburban life gone wrong. My mother would send me to the carport for a pail, and we’d scoop them in our palms, those hot pink flowers, float them in the bathtub or a big glass bowl on the dining table so our guests could ooh and aah. Once, we even placed them in a wide-mouthed vase on the lid of the white lacquered baby grand (say that three times fast).

No doubt my mother is still playing show tunes on the piano. No doubt my father is still singing “Home on the Range,” the only song he ever learned by heart. I’ve heard the neighborhood is still as white as morning glories, still as straight as the roads that lead to the supermarket, the library, the hardware store. In his letters, my father recounts how retirement agrees with him, how they are spending more time away at the Shore.

You may be wondering how we’re managing the yard these days. (I’m not.) It’s darn close to a miracle what they can do with Astro turf. I know you’re probably thinking of Easter grass, something from the set of an old sitcom.  (I am.) But it isn’t that. We don’t have a single blade of real grass anymore, and you couldn’t tell the difference.  Maybe you’ll come visit sometime and see it all for yourself. (Maybe. Sometime.) They call this stuff “Dream Turf,” Julie. You don’t have to mow, water, or fertilize ever again, and your lawn always looks grand. In the margins, he has sketched the product’s slogan: NO MORE MOLES!

You see, where I’m from, no one wants to excavate what’s underground. Elimination of any threat should be quiet and complete, without making a mess or a scene. Your mother and I feel so lucky to be living the American dream. I know this because I lived there for many years. I know this because I am the mole.

‹ "Loneliness Recovery Rubric--Female," by Judith Sara Gelt up "The Walk Through," by Kirsten Voris ›