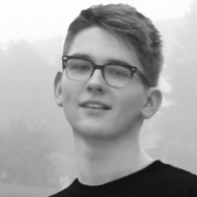 Joseph Felkers is a junior at Catholic Central High School, in Grand Rapids, Michigan. His work appears or is forthcoming in Superstition Review, Emerge Literary Journal, and The Daphne Review, among others. He is an editor for Polyphony High School, a poetry reader and past-mentee with The Adroit Journal, and an ice cream connoisseur at his local journal.

On the first day God said let there be / light, & ten atoms / shattered across the first skyline & made / earth’s first penny slot machine. Neon rattling / between subshells to the hum / of a lakelit evening. / Vacancy no vacancy. / God separated / the light from the bad & the diet  Mountain / Dew machines squealed, empty / & hungry for one last night of aspartame. On the second  day God created / land & so your body / was born of soot & ash & tooth. You / not so human yet, still / whining for the darkness / & its reunion. But on the third day he decided to mature / ovaries, singing the hymn / only flowers can know & he said / flora. You decided that that would be / your name. On the fourth, night & day / emulsified one last time & so day four / was officially day four. Bus tires screeched / with the stench of oak / & God was happy / & so you were happy. / On the fifth day God whispered / fauna so now the creature of your garden could become daydream. All were happy: fox &/ hen, but you, man of query / were still not whole. On the sixth day you were / finally made in the back seat of a yellow / taxi named River. Prophecies will only chew / you out on a day of rest, but for you—rest / will never come. For you, God has created a woman to hold / & you'd better enjoy / her while she lasts. For you had better not bite / the hand that made you from soot & ash & feather. The hand that bends / you over a cosmic armchair & says enough / is enough. / For you, the seventh day will never come.

Father says open & you say how

wide? I have been born from God

from true blood. I want you to tell me

how to wash your hands with the hair

of your stories. A parable is only a parable

until a candle is made from it, & you are only covered

until you can call yourself absolved. Not made,

consubstantial with the father.

I believe in another Capricorn coming down

from a cosmic slur and kissing my forehead.

I believe that one day, your children and their children

will exist no longer but as steeped blood and flesh. I believe that when

Father says bloom, you will say

or know to be true.

How do you write elegies

for trauma? Tell me how I’m supposed to write odes

to ice-slit lips, when I can’t even make the sound

of gunfire on paper. I’ve never been good

at making myself into myself again.

After each cell replaces itself, I still can’t say I’m clean.

Here, this is how a Catholic boy

choose wisely when you cast

for regulation. This is how to make

You have options, Joseph

& thank you God for giving me them.

If I have the liberty to choose

if my father shoots

or gets shot, let me choose the result

but that’s no basis for me to write a poem about.