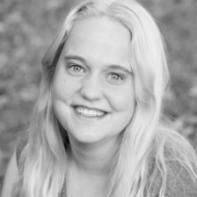 Elizabeth Argento holds an MFA in Creative Nonfiction from Old Dominion University in Norfolk, Virginia. She completed her undergraduate work at Eckerd College in St. Petersburg, Florida, where she was a Ford Apprentice Scholar of Literature. She is currently an Adjunct English Instructor at Old Dominion University. In the past, she has worked as a writing consultant, a tutor, a Barely South Review editor, and a PetSmart sales associate. She lives in Virginia Beach, Virginia with a Jack Russell Terrier who never tires of her.

The next time I was manic I knew. I knew and I could not have been more pumped. I pumped it up on that train car, the one headed home to Norfolk with nobody on it but me and my headphones and my dancing. The streetlights whirring past the window were like fire, a rave, glow sticks tossed into the sky across the moon. I’d never seen anything so fucking cool.

“Ma’am?” The train man tapped me on the shoulder. Why was he blocking the fire dancing? “You should sit down. We’ll be stopping at Norfolk soon.” I sat, and right as I was about to invite him to hang out he walked out of the car, his stupid little hat bobbing. Asshat. He should be watching me. I stood up again. Forget that guy. Next time I’d be on a plane: maybe Florence, maybe Dublin, or I could go to Korea and beat up my brother’s ex-fiancé, that bitch who took the ring with her. I took another swig from a tiny liquor bottle, the one from the dining cart, because I wanted to be drunk for this party but the stupid booze they sold me didn’t work and I still felt more goofy, not less.

I was planning my own reality show again, where people could watch me having a great time on an empty train car and everybody would be jealous because I’m hilarious and I can have fun anywhere. No one knows how to have fun like me and I have something to teach the world, something so brilliant because I’m smart and I’m fun and I’m sexy even after hours of traveling. The train man with his stupid hat will tell all of his friends and family that he was lucky to ever see me live in the flesh with the cameras following me.

When the train stopped in Norfolk my boyfriend Andy was waiting to pick me up. I jumped out and ran over to him and told him how much fun I was having and all of the songs I wanted to listen to on the way home and wouldn’t he just dance with me in the parking lot. We’re only a few blocks away from home, he kept saying, so lets take a few deep breaths, and drive home. We got in the car and I kept yelling that the ride was taking forever and I wanted to get out and dance because I was on fire.

“Don’t joke like that!” His voice was louder than I’d ever heard it. He wasn’t calm like he always is. “Don’t scare me like that, telling me you’re on fire.”

He didn’t get it because I felt like I was on fire and I wasn’t actually on fire and if he had listened closely he would’ve understood the feeling. There was a warm hum to my veins that I recognized from Ireland when I wandered off by myself before I knew what was really happening and who I really was. I was manic—flying high again despite my stack of meds. This burning feeling rushed through me and every second became so slow like those few blocks to home were hours too long. If time stayed this slow I could accomplish so much I could learn and teach and do so much.

When we got home I threw my shoes off and walked outside. Andy was out walking the dog and wouldn’t know. I wanted to feel everything as I walked past and I couldn’t do that in sneakers and I needed to feel the grass and the air around me. I could sense my dog and my boyfriend together but I had to stay away from them so I could explore. The textures everywhere were so different: pavement, grass, asphalt. The air was always the same—smooth, damp, summer stale. I could move so fast it was almost like I was gliding instead of walking, or riding on one of those moving walkways at the airport. That’s where I should go next—the airport. Hawaii still awaits—or Florence, or Korea. Once I finished my walk I’d find a flight.
On my walk I found a black bag. I stopped to look. It was a pet waste bag from the dispenser, but it had been placed here, right in front of me, right where I could see it. I closed my eyes and tried to communicate with my dog. Surely he left this here for me. What did he need to tell me? What did this mean? I wished the cameras were following me so I could discuss it out loud. It felt like a warning, an ominous message. I walked faster then, trying to reach where Andy and my dog would be, but I couldn’t find them and I was so worried and what did it all mean—
“Babe? What are you doing out here?” Andy was behind me, leaning over to pick up our terrier’s poop with one of the bags. Maybe that’s what the sign was—I needed to go back to find them. My dog ran up to see me, jumping up on my legs, licking my knuckles. He was safe. He just needed to see me. He called for me with the bag. He called me home. I took a deep sigh of relief and went inside.
--

I’d been on mood stabilizers for six weeks but still had my ups and downs. There were other meds too, and I took them every day like the doctors said, like the therapist encouraged. The crazy shit, allegedly, was going to stop; the real crazy shit, anyway. There’d always be symptoms. I could still keep my spark.

“How do you feel about trying Lithium?” Lara, my Psychiatrist, was smiling, her beaded necklace jingling. Around her office were exotic rugs, photos of children from other countries.
“I don’t need any more pills.” I was angry that she even asked. I had chosen her because she was a hippie doctor, one who dressed like a college student and had an office full of frivolous decorations. I liked her beads, her dark curly hair, her love of dogs. Her belief in random vitamins. Her asking me how I feel. Though I’ve never believed in alternative cures, I knew a doctor like this wouldn’t throw pills at me, wouldn’t drug me to shut me up. A doctor like this would only prescribe what was absolutely necessary. But here she was, throwing the “L” word in my face.
“I’m not a battery,” I said, looking away, “and I already eat a lot of salt. And I already take a lot of pills.”
“But you’re still having breakthrough manic symptoms.” She was still smiling. “Adding a small dose of Lithium can stop that. Lithium and Lamictal—your mood stabilizer—work very well together.”
“Will I get fat?” I stretched my shirt down, hiding the weight I’d already gained. I couldn’t risk packing on any more.
“Liz, we’re just going to put you on a small dose. There shouldn’t be any side effects. You may develop a small tremor, but at this low dose, you probably won’t.” She wrote out the script then, by hand, the word “Lithium” bold and legible. “And these manic breakthroughs should stop.”
“What if I like them?” At the time I felt it was unheard of, a new thought no bipolar patient had ever asked. I felt original, special, like someone who had discovered the big secret.
“Everybody likes them.” She put her pen down, dismissive. “But we both know you can’t be running around in the middle of the night barefoot, by yourself, looking for attention.”
I didn’t respond. I didn’t see the problem with any of it.
“And, well, this is Norfolk, you know.”
I took my script and left.
--
I left the prescription sheet on the dining room table, under a pile of junk mail. I put a salt shaker on top of it so it wouldn’t get lost. It was safe here, beneath the clutter; Andy and I were far from neat freaks. We only used this table for parties and poker games. Later, when we got a miniature pool table to put there, it became a great hit among our friends. No one looked under piles of junk mail or beneath novelty pool cues. No one knew it was there. I hated how it said “lithium carbonate,” in perfectly legible handwriting, so anyone could read it. I wished it had some other name, some generic science formula that I couldn’t recognize.
I wanted to go fire dancing again. The Lithium, surely, would take that away; I’d gain more weight. I’d get a weird tremor like some sort of junkie. Maybe I’d drool and forget my own name and look like a total loon. People took street drugs to feel the way I sometimes did. Expensive, dangerous drugs. Nature had given me a high for free. Maybe I shouldn’t waste it. There was so much tempting about it: I could be the life of the party, the party myself, and feel more joy than most people do in their lifetimes. If I could just muscle through the downside, I could be some sort of legend, the happiest person that ever lived. Maybe they’d develop a drug that took away my crushing depressive cycles, but left my fire alone. Maybe I shouldn’t fill the prescription. Maybe I should just wait.