A Poem by Amie Whittemore 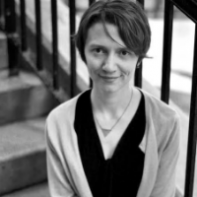 Amie Whittemore is the author of the poetry collection Glass Harvest (Autumn House Press) and co-founder of the Charlottesville Reading Series in Virginia. Her poems have appeared in The Gettysburg Review, Sycamore Review, Smartish Pace, Cimarron Review, and elsewhere. She teaches English at Middle Tennessee State University.

Though I marked my calendar, I’ll forget to watch
earth paint the moon gray, then black, then white again.

White as toothache, dry elbow skin, a crown of bones,
as, I imagine, a narwhal’s tusk, though I’ve never seen one.

Tonight, I’d dip that tusk in my wine glass
to prevent all future hangovers, all future gloomy

a spouse to soothe me—but I don’t. Like—I won’t say
earth or moon—but like a shovel, I’m purposeful

but often idle. Collecting cobwebs is a passing,
though fulfilling hobby. Someday, I hope to be less

shovel, more soil. Prepped for roots, for thriving—
Love, I want to say now (to whom, I’m not sure),

I’ve come to a different power tonight. This is the self
stripped of alimonies, stripped of pearls.

Unforgivable, unrelenting, cherished by no one—
not you, wife, nor you, husband. Not even you,

dear moon, whom I want to see cloaked
but won’t. Clouds tonight. Bats beading them.

At least, I think so. Maybe smaller darknesses
are just that—smaller, and thus, personable.

‹ Two Poems by Aaron Reeder up A Poem by Ash Bowen ›