A Poem by Ash Bowen 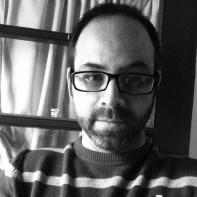 My father was a lonely motor so he forged
a flywheel from the softest metals, siphoned
the last of the laughing gas and trickle-charged
the battery on the woman he'd abandoned.
She squinted when he took her out of storage
and kicked until the ether tugged her under.
She unbolted like a bride upon her marriage
bed, aglow beneath the surgery of his welder.

Her drugged eyes opened in the post-op dark
and winced at where their metals met. And with
this flywheel, I thee wed: he swore to smith
a son who spoke her dialect of metal.
She stiffened at the sight of his steely stork
alighting on her stirrups, ankles, et al.

‹ A Poem by Amie Whittemore up Four Poems by Carolyn Guinzio ›