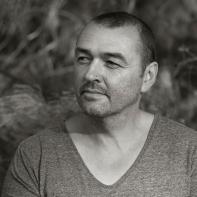 Born on May 1, 1968 in Bordeaux, France, Alain Laboile is a photographer and father of six. In 2004, as he needed to put together a portfolio of his work as a sculptor, he acquired a camera, and thus developed a taste for macrophotography, spurred by his passion for entomology. Later on, he pointed his lens towards his growing family which became his major subject in a realistic depiction of their atypical lifestyle. Alain Laboile's work has since been exhibited around the world and he just published a book with Kehrer Verlag: At the Edge of the World.