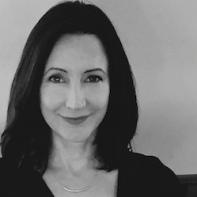 Megan Harlan’s creative nonfiction essays have recently appeared in Alaska Quarterly Review and The Common. She is the author of Mapmaking (BkMk Press/New Letters), awarded the John Ciardi Prize for Poetry. Her poems, short stories, and articles have appeared or are forthcoming in Hotel Amerika, AGNI, TriQuarterly, The New York Times, Prairie Schooner, New Orleans Review, Meridian, and Arts & Letters, among other publications. She holds an MFA from New York University’s Creative Writing Program and lives and works as a writer and editor in the San Francisco Bay Area.

When you are six, you move into a motel in Los Angeles with your mom and your little brother. For six weeks you live on the second putty-colored floor, behind one front door and one front window overlooking a Denny’s and a shear wall of freeway. Palm trees droop over asphalt, the native garden of parking — cars that come and go in ever-shifting colors and patterns. Your mother doesn’t have a car anymore. You came and will leave here by taxi.

It is the Bicentennial year, and every day can look like the Fourth of July. Denny’s flickers with miniature American flags planted along the walls and booths. This is where you eat every meal during your stay at the motel.

At breakfast, the waitress with the frosted blond upsweep greets your family, asks about you and your brother. She talks about her kids, older now. She knows you should be in school but aren’t. She always lets you pick the same booth. She brings your mother all the coffee she can drink.

Every morning, you get silver dollar pancakes you smear with butter and pile with powdered sugar, a dense snow-cover that yellows with butter, grows crunchy as the pancakes cool. These pancakes are the most delicious things you’ve ever tasted. As the weeks go by, you don’t even order them: The waitress just brings them right over, with little paper containers of powdered sugar dotting your plate.

Your brother sits next to you. He is half your age, about half your size, and you worry over him like he is a squirrelly blond pet. He likes syrup more than powdered sugar on his silver dollar pancakes, which strikes you as insane. But you know this is the high point of his day, and yours, and so you stop forcing him to eat powdered sugar and let him get syrup all over himself.

The Denny’s morning-shift waitress is the only person outside your family you talk to most days.

The first place that slammed the words “motor vehicle” into “hotel” is up the coast in San Luis Obispo. It dates to the 1920s, when cars first hit California like an amphetamine to the nervous system. Your motel was built in the Space Age — the era when chain motels constellated along American interstates by the tens of thousands — and its modernist veneer is showing signs of wear. Like a space station, it provides only the barest necessities for human survival in its environment, for people bending time and space in new ways with their travel. What’s new: You can drive anywhere, faster than people have ever travelled by land; you can always stay the night in a motel.

Your dad grew up in Big Bear, a ski town high in the San Bernadino Mountains, a range you can see on clear days from Los Angeles. As a teenager in the 1950s, your dad, with his two brothers, tinkered under the hood of one beautiful but broken-down car after another. Your father’s pet car project: A rusted-out Austin Healey, which he nursed back to glory during college in L.A. and sold after he married your mother — a sale he will speak of as one of the biggest regrets of his life.

Your mom lived all over the West Coast growing up, including towns very close to your motel — Pasadena, Monrovia, Altadena. Your mother still talks about how, when she was young, her father loved to put her and her mom in the car on the weekends, and just drive: pick a road and see where it goes. These were some of the happiest times of your mother’s childhood — driving fast with her family, with no destination.

But your family has no car at this motel. Your family spends almost all day in the room, the heavy front curtain pulled over the natural light, which your mother says is important for privacy. Shadows cover you like sheets of water, soaking the usual motel room features in grays and dark blues: Two beds, a bathroom with a bath, a nightstand with a Bible in the drawer. A dresser your family fills with nothing. A television your mother never turns on. Carpeting she warns you is filthy, no matter how much it’s vacuumed.

Your family is set to move to Iran. Your dad is in London until that happens, because of his job. Iran, to you, might as well be in outer space. London might as well be the moon, since it does seem closer, and you have heard of it, in books. You’ve never heard of Iran until your parents began discussing it as your next home. You will get there by flying to London first.

But then, one week at the motel, Iran changes to Saudi Arabia. You will move there instead because Saudi Arabia has lots of oil and America is having an oil crisis and your dad’s new job will bring more oil to Americans. Americans need oil for gasoline so they can drive around their country as fast as they can. It’s a big country. It’s fun to drive fast. It’s fun to be free to drive anywhere you want; you can always stay the night in a motel.

Your mother is not happy about staying in the motel until a taxi will take all of you to LAX. Then you will travel to London, and then Saudi Arabia, and then dozens of destinations that will seem chosen as if from random stops on a spinning globe — Kathmandu and Mombassa and Abu Dhabi, Hong Kong and Heidelburg and Athens, on and on and on. No one knows when you can leave, when you can start all of this. Your mother hates to wait, she is always saying. All these years later, you wonder who on earth likes it.

In the motel room, your mother collapses like a star. Whatever she is feeling billows inward, stifles into the state of waiting. What this looks like is a lot of motion that results in nothing, or almost nothing, or nothing visible. Pacing, unpacking, repacking, reshuffling items, activities that revolve around and around and wind up very close to where they started. The enormous force within your mother re-implodes by the hour, scaling downward to a figure seated in a dark room, or walking around it. Often she is reading by the nightstand light. Usually you are reading by the nightstand light. Your brother is playing on the filthy carpeted floor with his toy cars.

Outside, cars shoot across the freeway so fast you can never know anything about them. Yet you are a constant witness to the fact of them.

A few months ago, your mother describes to you one of her earliest memories, from when she was three or four, and it’s a new story to you. She and her mother were living in an apartment in Portland, Oregon, while her father was away somewhere. And her mother left the apartment late at night to visit a friend down the hall. But your mother didn’t know this. Your mother went to sleep, woke up in the dark, and found her mother gone. She panicked — wailing, yelling, knocking on walls and doors. It felt like hours that she ran around the apartment, screaming for her mother. Finally, she tired herself out, and was discovered — when her mother returned home — asleep, tear-streaked, on the floor.

Her mother was right down the hall, having a drink with a friend. But her mother might as well have been on Mars. Her mother might have been speeding down a freeway going who knows where. Disappearance is solid in those moments. It is a loss that glazes and fractures all the space around it.

Some places beckon for these kinds of disappearances, or present them as a dare: All the motel room doors lined up along a hall, an outdoor walkway. These places seem disposable, built for throw-away nights. You could choose this door, or that, or one on the first floor. You could step inside it and disappear forever, take on another life, leave in a different car. The randomness tantalizes, broken from any weight of self. It’s like the game of pretend when toddlers close their eyes and think they’re hidden from the people around them, except the game is turned on its head: It’s you who might pretend to disappear from your self, into a new world that could hide you from it, through places you can’t yet imagine.

Your mother chooses another door: a book-cover. These doors could lead anywhere. You have many small doors in your bag. The motel room is paused while you enter them, line after line like path after path, street after street. The spaces inside them billow wholeness, planed and enfolded with direction.

You cannot build a home out of a dozen small doors in your suitcase. But you try.

You pass through one into a place near Oz, where trees grow magic lunch pails. You sit on the bouldery rocks, as the shrieking Wheelers — human-like creatures on all fours, with wheels for feet — retreat. The sandwiches in the magical, sprouting lunch pails remake themselves over and over for you: thick-cut white bread with ham and butter. You snap off the little glass bottles of milk. The sun on your face, the metal lunch pail hot to the touch, you take out the cloth napkin, the apple, the slice of cake. After lunch, you will join the others — Dorothy and the talking hen, also from Kansas — as they find a locked door carved right into the stone hills. They have already discovered the key. Their travels seem both random and lucky: The best kind.

The Oz books, like this one — Ozma of Oz — were some your mother’s favorite books, too, as a kid. They are the rarest of classic fairy tales: American. They were dreamed up by a traveling salesman.

You re-emerge into darkness, the motel room. All these years later, you still enter those shadows, with books, the twilight that disappears now into wherever you can imagine. It’s a home, or familiar as one. Because as much as you’ve tried, you don’t remember leaving the motel.

‹ "To Make It Make Sense," by Kristina Moriconi up "Unconformities," by Rebecca Durham ›